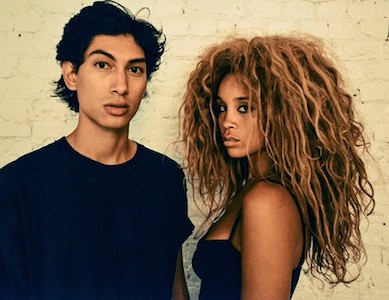 Lion Babe. Courtesy of the artist

James Kalm, despite some stinging comments published in a critique of the exhibition “Crossing Brooklyn,” and the initial disappearance of his name from the guest list, is inadvertently admitted to the Museum’s Brooklyn Artists Ball. While celebrity artists schmoozed with deep-pocket donors in the main foyer, your correspondent slinked upstairs to an empty gallery, and records video of “Basquiat: The Unknown Notebooks”. Jean-Michel Basquiat uniquely captured the spirit of his time in the 1980s East Village. Featuring 160 pages of rarely seen documents, and related works on paper and large-scale paintings, this display presents the artists poetic side, while also exposing his deep interest in language games, lists, ontological design and daily ephemera.


Basquiat: The Unknown Notebooks with an evening of live music, dance, performance, and film. Highlights include music by Lion Babe; a screening of Jean-Michel Basquiat: The Radiant Child; a dance performance by Urban Bush Women; and opportunities for interactive engagement with the exhibition through a dance workshop by subway dance collective W.A.F.F.L.E., a collective mural by Slack Glaze, and a writing workshop.

*Denotes a free ticketed program. Tickets are handed out at the Visitor Center one hour prior to each program.

*6 P.M. Curator Talk: Curator Tricia Laughlin Bloom shares her insights into the creation of the exhibition Basquiat: The Unknown Notebooks.

7-9 P.M. Interactive Space: Join W.A.F.F.L.E. (We are Family for Life Entertainment), a collective known for transforming subway cars with gravity-defying pole pirouettes and acrobatics, for an interactive performance and dance workshop. Contribute to a collective mural with Slack Gaze and enjoy an ’80s hip-hop set by DJ Kid Ginseng from Tom Tom Club.

Museum admission is free from 5 to 11 p.m. and includes entrance to galleries and events. Programs are subject to change without notice. For more information, visit www.brooklynmuseum.org. Museum galleries are open until 11 p.m. Parking is a flat rate of $5 from 5 to 11 p.m.

Directions:
Subway: Seventh Avenue express (2 or 3) to Eastern Parkway/Brooklyn Museum stop; Lexington Avenue express (4 or 5) to Nevins Street, cross platform and transfer to the 2 or 3. Bus: B41, B69, B48.On-site parking available