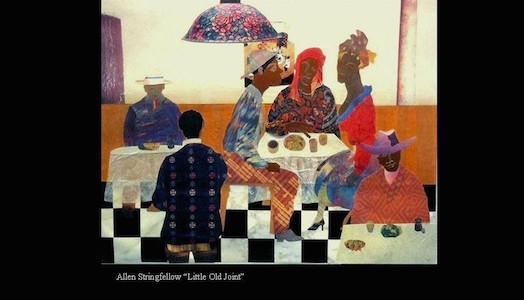 “Essay” is an exploration, in collage, of the life experiences and memories that were the seed bed for the recreations of Allen Stringfellow’s time. His subject matter encompassed the urban milieu of primarily Chicago’s Black Belt.

Most of his work depicts events from the many “Harlems” that existed throughout the United States. Allen did not produce any series of work unlike Lawrence or Bearden. However, the subject of each individual work of art—conveys an underlying social commentary about human identity seen through the prism of race and class. They were his surroundings. The people he knew…the happiness, tragedies, and the sorrows of mankind. He was part of the Black community; the Black community remembering and speaking.

“His work was a statement of the Black man’s capacity to create happenings, spectacles of beauty, moments that for a time oppose a hostile environment of pain and squalor. Stringfellow demonstrates this spiritual capacity of a people to create joy in the heart of suffering. This is a reality that can only be alluded to by the foolishness of pictures. Stringfellow draws upon Jazz rhythm, the circus arena, impressionism and the cinema to create a zone where Black possibilities could live and imaginations soar.”

Ive 5 years ago
Do NOT follow this link or you will be banned from the site!