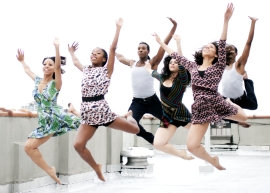 For the past forty-three years Alpha Omega Theatrical Dance Company has stayed true to its primary mission of expanding opportunities to provide a platform for multi-cultural choreographers and dance artists. Under the artistic direction of Enrique Cruz DeJesus, Alpha Omega continues to create, perform and educate through dance by presenting important, exciting, illuminating and exhilarating dance programming. The main techniques employed are modern and the richness in background is such that the audience is treated to many different styles and influences. The dances range from urban life to that of tribal influence, and from the abstract to the dramatic. Alpha Omega’s extensive performance history includes local, national and international engagements at venues such as Lincoln Center’s Out of Doors and Alice Tully Hall, Kennedy Center’s Millennium Stage, the Smithsonian Institute, Jacob’s Pillow Inside/Out, the United Nations, Brooklyn Academy of Music, and many more.

True to her name, Brooklyn native Karisma Jay has been dancing and performing since the tender age of 2. Currently, she is a featured performer with the international sensation, STOMP. She is also the Founder and Artistic Director of Brooklyn’s AbunDance Academy of the Arts. Teaching dance since the age of 10, she has become skilled at developing the confidence and charisma of even her shyest students, who range in age from 2 to 92. An alumna of LaGuardia High School of Music & Art (Dance) and NYU Gallatin (Pre-Med and Performing Arts), Karisma has performed/toured with prestigious dance companies such as Brooklyn Ballet, Maimouna Keita, Creative Outlet, Asase Yaa, and Ronald K. Brown’s Evidence. Her TV credits include programs aired on Netflix, BET, MTV, NBC, and VH1, to name a few.