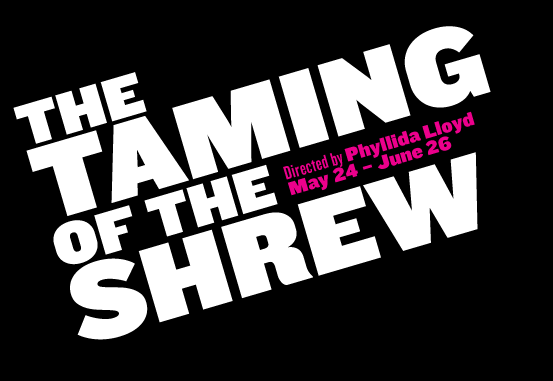 Taming of the Shrew logo

Tony nominated director Phyllida Lloyd turns Shakespeare’s zany comedy of the sexes THE TAMING OF THE SHREW on its head, with an all-female cast and a bold new take.  Lovely Bianca is the prize to be won by all the men looking to land themselves a wealthy wife. But the competitors will first have to marry off Bianca’s clever, fiery older sister, Katherina played by Olivier nominee Cush Jumbo, who may just outsmart them all. Tony and Olivier winner Janet McTeer plays Petruchio, the wild outsider Katherina must outwit, in Shakespeare’s original screwball comedy showing the lengths men will go to for their legacy, what women will do to break free and the outrageous things we all do for the human heart. Cast of THE TAMING OF THE SHREW features Candy Buckley (Vincentio); Donna Lynne Champlin(Hortensio); Rosa Gilmore (Lucentio); Judy Gold (Gremio); LaTanya Richardson Jackson (Baptista); Cush Jumbo (Katherina); Teresa Avia Lim (Biondello); Janet McTeer (Petruchio); Adrienne C. Moore (Tranio); Anne L. Nathan (Pedant); Gayle Rankin (Bianca); Pearl Rhein (Ensemble); Leenya Rideout (Ensemble); Jackie Sanders (Ensemble); and Stacey Sargeant (Grumio).

Free tickets are distributed, two per person (age 5+), at the Delacorte Theater in Central Park beginning at 12:00 p.m. on the day of each performance.

BOROUGH DISTRIBUTION: In addition to the ticket line at the Delacorte Theater and the TodayTix online distribution, a limited number of vouchers for specific performances will be distributed, while supplies last, at locations throughout New York’s five boroughs. This year’s distributions will have more locations throughout the five boroughs and dates to provide New Yorkers more opportunities to obtain tickets. Each person in line is allowed two vouchers and each voucher is good for one ticket for that evening’s performance. Vouchers must be exchanged for tickets at the Delacorte Theater Box Office that day from 5:00 p.m. to 7:30 p.m.

For THE TAMING OF THE SHREW, ticket vouchers will be distributed, while supplies last, on Thursday, May 26 in Brooklyn at the Brooklyn Children’s Museum (145 Brooklyn Avenue); Friday, May 27 in the Bronx at The Point (940 Garrison Avenue); Sunday, May 29 in Staten Island at Snug Harbor Cultural Center (1000 Richmond Terrace); Tuesday, May 31 in Queens at the New York Hall of Science (47-01 111th Street); Wednesday, June 1 in Staten Island at Snug Harbor Cultural Center (1000 Richmond Terrace); Friday, June 3 in the Bronx at DreamYard (1085 Washington Avenue); Saturday, June 4 in Brooklyn at the Center for Family Life (443 39th Street); Sunday, June 5 in in Queens at the Queens Museum (New York City Building); Wednesday, June 8 in Manhattan at Harlem Stage at The Gatehouse (150 Convent Avenue at W. 135th Street); and Sunday, June 12 in Manhattan at The Center (208 W. 13 Street).