If you love clothes, daydreaming about food, or just craving the good life, consider Paris, France for your next vacation spot in 1978. This fast-paced city excels in each of these categories and maintains high quality support services — transportation, information and safety — so encouraging to the tourist industry.

We recommend that after selecting your date of departure that you choose a flight that arrives in Paris early in the morning before baggage carousels become crowded and declaration lines become long. Flight schedules reflect local times of departure and arrival, so there’s no need to add or subtract hours. If you’re on tour, your transfer guide will probably claim your luggage for you. If you’re independent, use one of the handy baggage trucks that resemble shopping carts. This will eliminate the mad rush for a red cap and his fee. 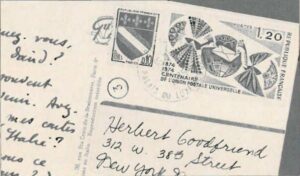 When you arrive at your hotel via pre-arranged transfer, bus or metered taxi, take a short nap. If you’ve travelled via Air France, you probably won’t be hungry, just a touch disoriented, time-wise. Take a walk to familiarize yourself with the immediate area and choose a local restaurant for dining. Do keep in mind that their dinner hour begins approximately one hour after ours. When you return to the hotel make arrangements with your concierge for an early bus tour with an English speaking guide . This along with one night tour are all the organized bus tours I would recommend. Spending endless days viewing Paris through a window is not the ideal vacation and can become costly. However, on your tour, familiarize yourself with your surroundings, take along a map (Plan de Paris par Arrondissement — found in any bookstore) and use it during your entire stay. Trace your tour along the map, as a beginning exercise and you’ll see how easy it is to use.

Costs of living arrangements for tourists are varied in Paris. The Mont Blanc, a student retreat, charges from $7-$17 for a double, while the deluxe Le Bristol ranges from $80-$125. Both are clean and safe but differ greatly in size, conveniences and elegance. A happy and economical medium may be struck by accepting a highly rated tour package which will include your flight, hotel and some sight-seeing. Again, see your travel agent early for the best possible arrangements.

If you can’t resist a trip to the ” Lido” where the most elaborately staged productions are viewed, then learn about the “Crazy Horse.” It is a newer version and displays the talents of Black performers. If you want a real night out, in a predominantly Black atmosphere, you’ll have to find a club privé (private club). My favorite is the Black & White on rue de Lombard. It is always crowded, with brothers and sisters from all over the world —  celebrities included. The music is on time and the partying never seems to stop. Getting an invitation from Samba, the proprietor, may be tricky, but if you contact me early. I’ll try my best.

I’ve saved the most difficult leg of your vacation for last — packing. IF IN DOUBT, LEAVE IT HOME. Unless you anticipate an extended visit, limit yourself to two suitcases and a shoulder strap tote. Carry a compact passport case, but ladies, never a pocket book. They only get in the way. Your luggage should be lightweight, sturdy , and handsome. Hotel employees do pay attention to these things and better service may be obtained if you avoid that “tacky” look. Leave room for irresistables and gifts by rolling clothes tightly with tissue paper to prevent wrinkling. A steamy hotel bathroom will remove remaining wrinkles in clothing. An electrical converter is a necessity since French and American electrical cycles differ. Include a miniature pharmacy — don’t forget aspirin and something for diarrhea. Opt for coordinated separates whenever possible. Use accessories to dress the look up or down. Do pack one formal outfit for that elegant evening you’re sure to have. The famous restaurant, Maxims requires black tie on Friday evenings and prefers it on Tuesday. Even if your chosen restaurant does not require such dress, the extra effort will supply an unforgettable touch to the evening.

In most cases, it is best that you do not make arrangements for a car if you intend to stay in Paris. It is unnecessary and could prove to be an aggravating experience — you’ll find small standard shift autos and seemingly erratic traffic. To those midwesterners who are appalled at the Manhattan traffic experience, I suggest trying rush hour at the Arc de Triomphe. There one sees approximately six crowded lanes of cars, no painted lane dividers, fists and heads waving, little or no signals for crossing from lane one to lane six, and, groups of ladies dressed in maroon, wearing fierce expressions. You guessed it … Parisian meter maids!

The metro on the other hand is cool, quiet and well organized. Tickets may be purchased for 2 francs or $.40 from an agent or a machine at the metro station. Slip this ticket into the Turnstyle slot and you’re permitted to proceed. You’ll find clear and complete system maps at each station pinpointing your exact location. The train itself is named for its destination. New Yorkers who ride the subways will appreciate the quiet ride. If time is not of the essence, try the bus system. Much like New York’s, it’s slower and gives a bumpier ride. However, you do get to see where you are going. Most stops have small shelters with maps showing your location and the route of the bus.

Mopeds and bicycles are used extensively in Paris, but unlike Bermuda this city is not a spot for the novice. Taxis for evenings out are very useful. They are many in number and metered. Your doorman will gladly hail one for you.

Shopping is one of the favorite pastimes for both Parisians and tourists. There’s something for everyone and although Paris is expensive, bargains abound. If designer clothes are your thing, discover the haute couture boutiques for women of Pierre Cardin, 185 Boulevard St. Germain; Christian Dior, 11 Bis rue Francois-ler and Yves St. Laurent, Rive Gauche , 21 rue Spontini to name a few. Most items are ticketed under $200, many 30% to 50% lower than New York prices. Elegant men’s wear may also be found at Givenchy Gentlemen, 3 ave. George V; Lanvin 2, rue Cambon and rue de Rivoli; and Les Cravates, 8 rue Boudreau (where you select your own fabric and in 48 hours have a lovely tie for about $3 ). Be sure to visit Au Printemps, 64 Boulevard Haussman where the housewares are as beautiful and varied as the fashions. You’ll find complimentary hostesses who will guide you during your spree at Au Printemps. Parfumaries, bonboniers and shops are on every corner. Compare prices and ask for your tourist’s shopping discount (up to 20% ). You’ll bring home treasures at reasonable costs.

PARIS
Things to Do

Paris is an attic window smiling with geraniums; a convent garden hidden behind a hard 18th century exterior; a butcher’s slab making up a still-life picture; a cafe terrace full of people looking at people; a little street which gets lost in a mysterious penumbra — a perspective that captures your heart. Paris is also monuments —  giving everything an air of dignity. From some of them, there is a wide and original panorama. 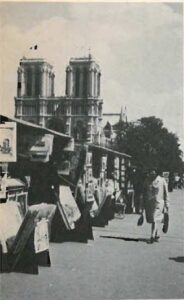 One should go to the top of the south tower (69 m), to admire closely this wonder of Gothic art, its buttresses, its gargoyles, its spire and to look over the heart of Paris, the Ile de Ia Cite and the Seine with its bridges and banks.

After having been the subject of much debate among Parisians it has in time become the undeniable symbol of Paris. A masterpiece of metal construction, it remains as evidence of the 1889 Exposition Universelle. On the first two platforms restaurants and tea rooms; on the third, the widest view in depth of Paris and the surrounding area (about 70 km).

From the Basilique du Sacre-Coeur:

From the front of this monument erected (by public demand) at the end of the 19th century, an exceptional view of Paris encompasses a radius of 50 kms — the old village of Montmartre in the foreground. The Basilica can be reached by the funicular from the Marche Saint Pierre (from 6.00 to 23.30 daily). Tel. 254-17-02.

From the Palais de Chaillot:

From the terraces of this original architectural achievement, the panorama includes the gardens and the illuminated fountains of Trocadero, the Seine, the Tour Eiffel, the orderly Champs-de Mars gardens, extending as far as the Ecole Militaire and, behind this noble souvenir of the 18th century, the modern U.N.E.S.C.O. building.

Son et Lumiere: If you come to Paris in spring or summer, there is a show every evening at 21.00 and 23.00 in English, and at 22.00 in French, at the Hotel des lnvalides in the Courtyard of Honor: “Shades of Glory”.