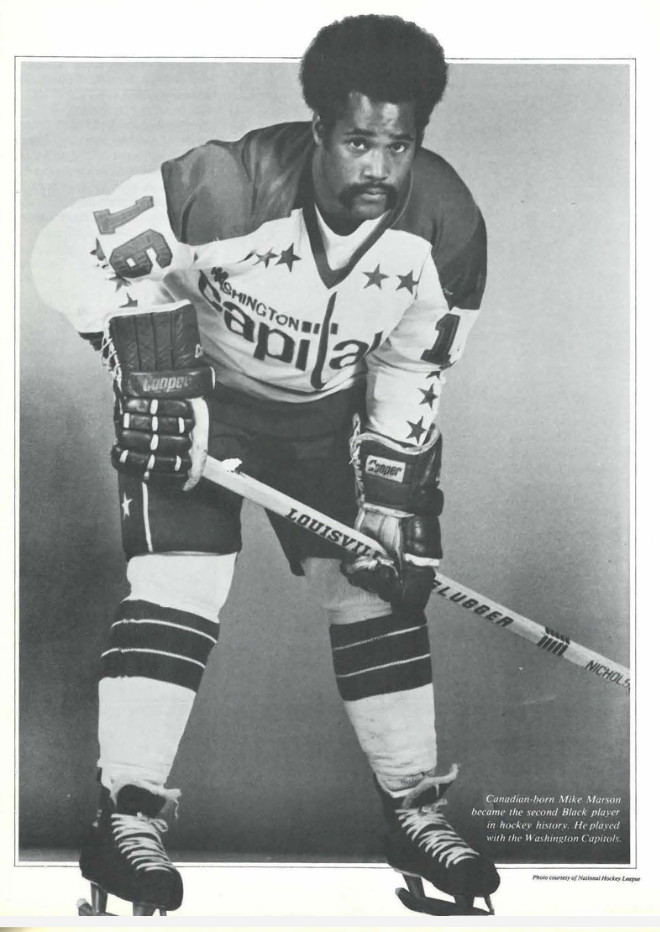 Ice Hockey is a rousing spectacle of guts and goals, with slick team work and dynamic individual play. The padded goalies, crouch inscrutably behind their eerie white skeleton-like masks, watching and waiting for the sudden slapshot— the blur of the black rubber disc that threatens their very existence. They try to ignore the flash of blades and the shower of ice chips that fly through the air. They have but one objective: Keep the puck out of the net!

The defensemen, in crouching positions, move up to the center ice, then wheel and back in quickly as the enemy leads a rush. A quick pass and the winger dashes across the blue line. He fakes a shot, then cleverly drops a pass to a teammate rushing in. The fake costs the passer a chance to avoid a crushing bodycheck. The defensemen crashe him into the boards, giving him a stinging taste of their sticks and their elbows. Gloves begin to fly, then fists. Blood begins to flow. The forward limps off and another quickly takes his place.

Two opposing players, skating full tilt, collide at center ice. They curse as the enemy leads a rush. A quick pass and the winger scoots across. An over-right hand, opens a cut over the eye of one of the “pugilists.” They clinch and heave at each other’s bodies. The other players rush to help. Paired off, one on one, sweaters are stretched to the ripping point as gritted teeth and looks of fury and frustration are strained on every face. The brutality of this game is quickly replaced by a sort of “ballet” on blades, as the power play continues to function perfectly. From the corner, to the point man, to the slot. The black rubber disc skims the ice from man to man. A shot! A red light! A roar from the crowd! A Goal!

It’s difficult to pinpoint the origin of the game of ice hockey with any degree of accuracy, but Canadians have been playing the game or an earlier version of hockey called “shinny” for way over a hundred years. Recognized as a Canadian game — although there is evidence that a form of hockey, certainly hockey on the field and probably hockey on ice, was played in European countries centuries before Canadians took it over, only to shape it, mold it and hone it to their own liking. By the tuurn of the century, the Canadian style of hockey had spread into the United States. Baltimore and New York were the first cities to make use of artificial ice for hockey games in the 1890s. So much for hockey history!

Professional ice hockey only came into vogue in the United States within the last ten to fifteen years, and has propelled itself into one of the more exciting, faster-moving games in the world. But one thing is clear. Of all the sports played in the United States, pro-ice hockey is the only game where the majority of players are either White Americans, Europeans or Canadians. There are a very small number of Black professional hockey players. Many reasons (some obvious) can explain this phenomenon.

In Canada, where a passion for ice hockey runs through the nation’s bloodstream like a fever, nearly every boy dreams of one day becoming a professional ice hockey player — especially in the prestigious NHL (National Hockey League). In the United States, baseball, football and basketball is to an American what hockey is to a Canadian — nearly every Black boy dreams of one day becoming a professional Walt Frazier, O. J. Simpson or George Foster. In these sports, there are at least 2-5 members of any one team that young Blacks can emulate. When did you last see a group of Black kids playing hockey?

The fact that most major league hockey stars come from Canada has prevented the sport from producing Black talent in volume comparable to football, basketball, baseball and other traditional U.S. games. It is true that there have been a few Black minor league ice hockey stars, but less than one handful have reached the major leagues. Willie O’Ree, a Black born in Canada, began his hockey career at the tender age of 7 years, and made hockey history in 1957. He became the first Black to ever play in the NHL. playing parts of the 1957-58 and 1960-61 seasons with the Boston Bruins. In 1975, Canadian born Mike Marson became the second Black player in NHL history. He played with the Washington Capitals; and true to Canadian tradition, Marson started playing hockey at the early age of 10 years.

Learning sports at an early age is usually the key to successful careers. The NHL normally selects a player when he reaches the age of 20 (in recent years, when the WHA began drafting juniors under the age of 20, the NHL naturally followed suit). Unfortunately , for Black children, the ice hockey “sandlot” facilities in inner cities and across the country are so few in number, that they are hardly in a position to even begin to learn the game either early or late in life. Also , it is an expensive sport. Prices of equipment range from $20 to $75 for helmets; shoulder pads $20-$25; shin guards $25, hockey pants $30 and skates from $120-$150. Because pro-ice hockey is a multimillion dollar sport, it is only logical for the NHL and the WHA (who are into “instant” money) to draft junior hockey players who were “born and raised” on the sport. In the March 1975 issue of Black Sports magazine, an interview with Mike Marson applied both logic and logistics … “There are 60,000 registered amateurs in Ontario alone. Out of that, only one makes the NHL. What do you think the odds are against a Black?”

Our school systems don’t seem to help either. The big varsity teams are usually baseball and football and our colleges give most of their scholarships to outstanding future Fraziers, Reeds, and Simpsons. Few schools, if any, will give full (or even partial) scholarships for future Orrs or Hulls. Plus, the physiographical elements of the sport-coupled with the economic of its accessibility make it difficult to incorporate into school curricula and difficult to create the aura of sportsmanship so inherent in the other American sports.

Expansion may be one of the ways to paving the road for Black hockey player development, not only via new franchises, but also through the news media. But within the last few years, the game of ice hockey on television has lost its national appeal, and thus viewer participation. Unlike football, baseball and basketball, ice hockey does nor have a national television contract and as a result, the available market for the sport has decreased.

If a Black pro-hockey player makes a pact with the NHL or WHA, it is a bid for Black fans in whatever city he plays in if the city has a large Black population and is within driving distance of the facility where they play. Thus the need for gate appeal is going for him. In recent years, the impetus of NHL expansion programs seems to be the seed that has sprouted forth more Black hockey fans. For example, the Atlanta Flames have seen an increase in Black attendance in several hockey seasons, but not in participation in the game itself. The main contrast in ice hockey is against American and/or European players, not Blacks. The game is run by Americans, for the most part, on the ownership level. The general manager level is dominated by Canadians, with the NHL having only one American general manager. Jack Button of the Pittsburgh Penguins. It seems that in all levels of ice hockey, you have to be just a bit better if you are an American or a European. So a Black pro-ice hockey player will only get a full shot if he is Canadian, first and Black, second. You can therefore, understand our sarcasm in saying: “What is a hockey puck?