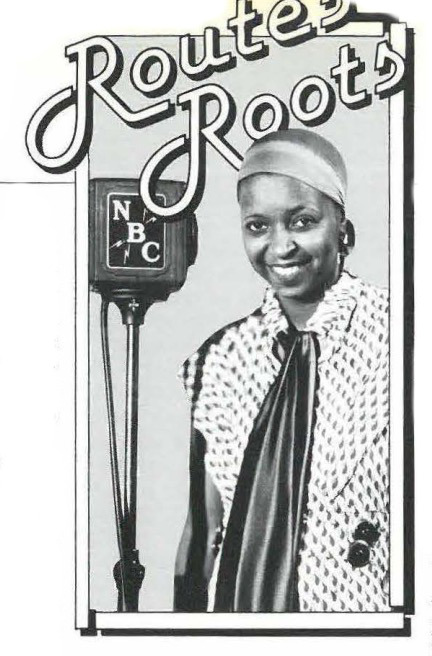 She started out as Sweet Mama String Bean and introduced St. Louis Blues. Her religious convictions led her to find peace in evangelism. At 80, she has left us physically but we will remember the spirit she brought to Broadway, motion pictures, radio and television.

Ethel Waters was born in Chester, Pennsylvania on Halloween day, 1896. A real Dead End Kid — she rose from the slum to become one of America’s greatest Black entertainers.

Along with many others, Miss Waters got her start in an amateur night appearance. The singer/dancer made the nightclub circuit and gained a reputation for her sultry renditions, the most famous of which is St. Louis Blues.

Coming to Harlem, she joined the jazz era of the 1920s and played Sam Salvin’s Plantation Club, the Cotton Club and Edmon’s Cellar. Her version of Stormy Weather opened the door to Broadway for a part in As Thousands Cheer.

In Cabin in the Sky — 1940, Miss Waters won much praise as Petunia Jackson by singing such songs as the title song and Takin’ a Chance on Love. She preferred acting to singing and felt that all her roles had to be based on real life experiences.

Her greatest fame came in 1950 as the maid in Carson McCuller’s Member of the Wedding for which she was nominated for an academy award in the 1952 film version, the first academy award nomination being for her role in Pinky in 1949.

Miss Waters is best remembered on television for her starring role in the series Beulah.

Miss Waters lived a life that was full of ups and downs. As she stated, “it was always going in circles. There were years of feasting and years of famine.” Biographers tell of her feasting years. But Miss Waters told of the years of famine. The years that taught her lessons, and the years that persuaded her to take some major steps. She put forth her spirit in her autobiography, His Eye Is On The Sparrow, named after her grandmother’s favorite hymn and whose lyrics exemplified her life. As Miss Waters explained, “I was never a child. I never felt I belonged.” God has been watching her all her life, just like he eyes the sparrow. And, when she got down so far, she bounced back with another show or movie. Although she was known for her moving style in her songs, she preferred to act rather than sing.

Though singing was her vehicle to fame, she did not like what she had to sing about. But people who came to hear her came to hear about the blues, sex and love. She longed to sing about “decent things” and in the early 50’s she started to sing the songs she spoke about. Those songs were found by way of the Billy Graham Crusades, where she rededicated her life to Jesus, raising her voice in song and praise. In 1972, she wrote another book entitled, To Me It’s Wonderful. It was dedicated to Billy Graham and his fellow Crusaders.

During the 1930s, 1940s and 1950s when segregation was still a way of life, Blacks could relish the fact that Ethel Waters made it to the “big time”. In movie houses where Blacks and whites were separated, Blacks would cheer the moving performances of Miss Waters because she represented the whole race in whatever she did. She had soul, dialect and delivery that we could relate to. Our emotional moments were not just for her and with her, but also because of her. Most of her roles were stereotyped and we knew why. Yet we loved her for being true to life. In her acting, she only showed her personal experiences and although she made it to the “big time”, she knew the prejudices of the time. She opened many doors, however, for future Black stars such as Lena Horne, Dorothy Dandridge, and Butterfly McQueen.

Ethel Waters was the leader among Black entertainers. Her versatility enabled her to rise from hooky-tonk night spots to Broadway. Her talent and determined spirit will always have an honored place among Blacks and for the messages she brought us in songs and words.