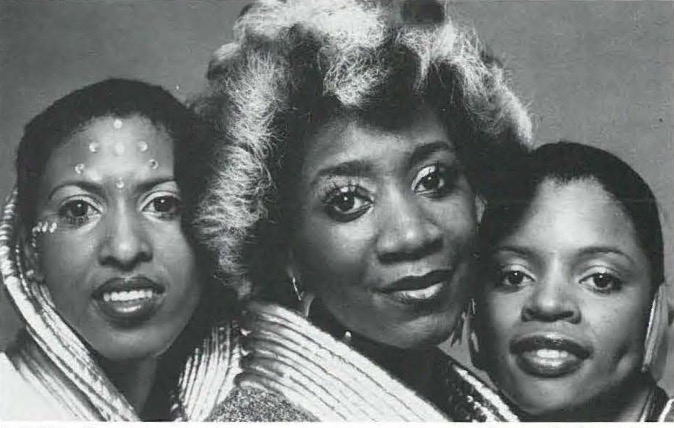 We are constantly told that life has so many riches for us. Those riches are ever unfolding, visually and mentally. An example of this process was a group known as LaBelle. Three women with beauty, energy and drive. Three who labored long to reach the plateau of stardom and become universally accepted. Their cosmic outfits and accompanying arrangements elevated their music, style and presence to sublime descriptions.

The high energy exchange that transmitted between these three and the audience was so tremendous that the knowledge of their no longer being together stunned us as it did their followers. It made us eager to want to know more.

ROUTES has the privilege of finding out more about them. In a private interview with Sarah Dash, we discovered a lot about them today, their beginnings and their futures. We discovered that even though they are separated, they are all equal in their aspirations.

ROUTES: Now that you are no longer with LaBelle, who is Sarah and what is she all about?

Sarah: Right now I am getting myself together for a solo career and I am about moving into another part of my life that I have never experienced before. And, it’s very challenging. Being a Leo with a Gemini rising, I can’t tell you how it really pushes me out there. But it is a good feeling. I am also at the point where I feel and definitely know that I have become a woman.

ROUTES: From whence do you come?

Sarah: Trenton, New Jersey. Both my parents are from South Carolina. I have eight sisters and four brothers.

ROUTES: Was your background centered in the church?

Sarah: Yes, my Dad had his own church in Trenton, and now he is like the father of six churches in his diocese. Every year they give him a special day, and they honor him.

ROUTES: Which of your parents had the heaviest influence on your life?

Sarah: My father said he did not want to know about show business. My mother was the one to give me the support I needed. You know, I had such a sheltered life, being that my family was and still is a tight knit family. I was 16 when we started singing and being the youngest in the group, we all had chaperons. Traveling through the states and abroad made me grow up very quickly. Having the opportunity to travel around the world at the age of 16 was unusual for us. Most people don’t travel around until they have finished school, married, and usually with children. The education that you get from traveling is the greatest experience in the world that one can have.

ROUTES: Did you go to college?

Sarah : I never finished high school. I had a tutor with me on our road tours and only one subject to finish. But I must say this, I don’t think that will affect my career. If and when I don’t understand something, I will ask you or whomever I am talking to, to explain what they mean. What’s wrong with that? I can speak a little French, German, and Spanish. You know a woman has no barriers.

ROUTES: At the time when the three of you started singing, what kind of an impact did it make upon your life?

Sarah: Knowing nothing about the entertainment business, I had stardust in my eyes. But using common sense, you realize when something is not correct. We realized we had no power to change the situations, so we dealt with everything one step at a time. I didn’t get into the business aspect of my profession until I was around 22; and then we changed our management and moved on, changed again and moved on up to this point. I am still with the same management and so is Nona as when we changed the group’s name from “Patty LaBelle and the Blue Bells” to “LaBelle”. I like the way my manager thinks.

ROUTES: Who is your manager?

Sarah: Vicky Wickham! I like the way Vicky thinks. When I was rehearsing for the show at Reno Sweeney’s, she said to me, “I’ll leave you alone for your rehearsals.” I went over my material for the show and when she came back to hear me, within 3 minutes she came up with different approaches to my material, and she proceeded to point out situations to me. She has an objective eye and ear for me. Ken Reynolds works along with Vicky. Together, they are important and help to fit the pieces together.

ROUTES: Did you ever do any appearances at the Apollo theatre on your climb up the ladder of success?

Sarah: Yes, we did the Apollo several times and each time was a memorable experience for us. From Bandstand, the Apollo, then the world. We took off and exploded.

ROUTES: Who is writing your material now?

Sarah: I have written some myself. I wrote the opening and closing song which I did at Reno’s. There is a guitar player named David Newlow, who has written some material for me and I have some different things coming up. Different songs you would never expect me to do. Vicky also has some tunes for me. One of them is a Mae West song.

Sarah: Yes, I love her. You know, she is a Leo also and her birthday is the same as mine.

ROUTES : Will Nona do any writing for you?

Sarah: Maybe, in the future, once Nona is on her way. But to say to her now, Nona would you do some writing for me is a heavy responsibility for her because she is so far removed from what I am doing now.

ROUTES: Does Vicky find it still a challenge working with you and Nona?

Sarah: Vicky has always thought of us as distinct personalities. The way we became LaBelle was by having three distinct personalities. We were at the point in our lives where we decided to go off into our own thing. I wanted to concentrate on acting, because I wanted to be an actress. But traveling and singing did not afford me the time for studying or acting. So that when the split came, Vicky was already thinking about our next single albums. Patty already has hers out. Nona is working on hers. But I am waiting to record, because I want to relax and give myself the time I need.

ROUTES: Do you want to explore the acting field?

Sarah: Yes, I have been sort of studying for four years and have had some workshops with the Negro Ensemble. I have been screen tested for Hair and a TV comedy special.

ROUTES: We have been following Patty and know of her success with her album, but where is Nona and what is she doing?

Sarah: Nona is doing a heavy rock scene in Europe. I think it is so hip to see her do this kind of music.

ROUTES: Where is she appearing in Europe?

Sarah: She will be appearing in Paris, Brussels, Germany and England. She took her own band with her. She is doing a special guest appearance on Peter Gabriel’s European tour. She has a total new sound. She will release a new album also entitled Nona Hendryx. I am so excited for her. She is doing good rock, tight rock, tear it up rock. I feel she has nothing to worry about.

ROUTES: Sometime in the near future, just for the hell of it, would the three of you ever get together for a concert?

Sarah: You know, no matter where I go on this earth, no other group or sound will ever duplicate the sound that we three had … . No one can give the same sound of Patty and Nona to me. That is one reason why I don’t have background singers. Because to me, singing with them was the perfect sound. No matter what roads we travel, we will always be together. I would like to do a concert or a TV special with them.

ROUTES : What do you see for Sarah Dash in the future?

Sarah: I see many facets of Sarah that the public has not seen nor heard. Doing all the things I have talked to you about, taking the challenges and attaining the goals I intend to reach.

ROUTES: How do you feel about your new career?

Sarah: I feel wonderful! To have the support of your family and friends is of the utmost importance. When you think about life, there are things that you realize that you should do, and there are those you don’t have to do. My family made many sacrifices for us. We had food to eat and shoes to wear, not realizing if Mom or Dad had to sacrifice or not, especially coming from a family of thirteen.

ROUTES: Your opening night at Reno Sweeney’s saw the first time Sarah Dash was alone on stage. How did you feel?

Sarah: I said, “Well this is it!” Those two nights when I first opened at Reno’s were for friends and to get constructive criticisms and to let all my nervousness disappear. The first night I had to let it all hang loose, but the second night I knew I had to do it. No excuses. All the negative things that one feels when she is on stage are now gone. I intend to take my time and relax and work with my vocal cords, not against them. This will also give me the freedom to let my spirit take reign. Like I was telling you, I promised my family that I will not let those sacrifices be in vain. I am at that point where my material being is not above my principals. I am going to put it all in a book one day.

ROUTES: Is it because of the knowledge you have gained?

Sarah: Yes, plus the experiences. I would like to do a book about the Black woman’s experience of today in the entertainment business. I have set long range goals for myself. Each day is a step closer to what I want to do. I see the TV show, Broadway, Paris Opera House and my book being written. Life is about growing and understanding. There are those who don’t and won’t understand my makeup, but that’s O.K. They have their moves that are different from mine. They cannot do my job and I cannot do theirs. I have to move for Sarah, it’s about paddling your own canoe.

LaBelle is no more. Like the Phoenix bird LaBelle sang about being consumed in fire by its own act and rising in youthful freshness from its own ashes, Patty LaBelle, Sarah Dash, and Nona Hendryx are three cosmic rays that will continue to explore your mind.