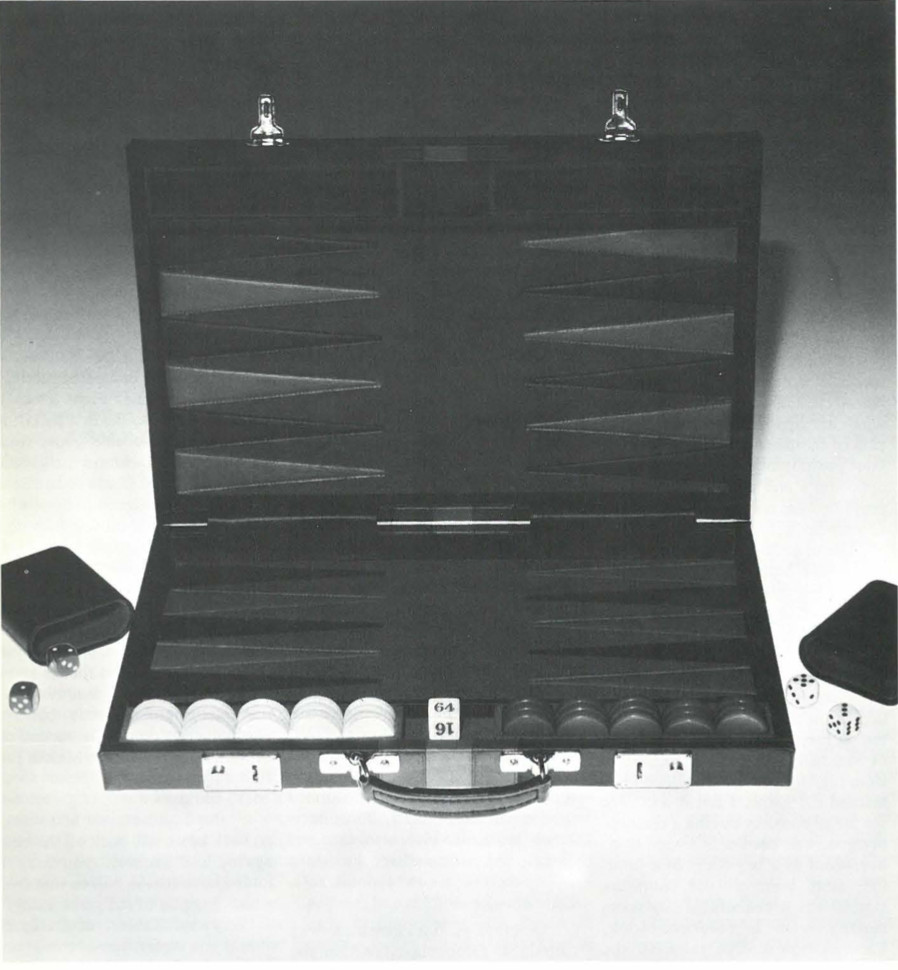 Game fans are a loyal breed who often go out of their way to promote their particular favorite(s). About a year ago, just a few days before Christmas, I received an invitation to attend a party the day after Christmas. At first glance, I read the invitation as “A Christmas Party . . . ” Later that evening, I picked it up again and perused it carefully. It read, “A Christmas Party — GAMES ONLY … RSVP.” Games only, eh? Ummm . . . what evil lurks in the hearts of women? My thoughts went in all directions. Games only, eh? Well, I had to get my RSVP in right away because this was surely to be a “somethin’ else” party.

When I arrived, the party was in full swing. But, not in the manner I had anticipated. The Christmas tree, the lights, and all of the decorations were absolutely magnificent. There were about seven to eight card tables spread around the large living room with many different kinds of games on them. Guests, seated at every table and also on the carpeted floor, all were very much involved in their games. As my gracious hostess took my coat, and at the same time offered me food and drink, I thought “So this is the Games only thing — What a bore!” At that point, someone at a table on the other side of the living room, yelled out “That’s the fourth Backgammon, my man!” My head turned in the direction of that assertive sound, and I thought, What’s Backgammon? His partner, looking as though he had lost $1 million at a gambling casino said, Let’s play one more game, OK? As I walked over to the bar for a drink, the word Backgammon began to trouble me. What is it? I took a sip of wine and watched the games already in progress — Scrabble, Mille Borne, Othello, etc. I had heard of these games before, but not Backgammon.

Finally, I couldn’t resist the temptation any longer. I put my drink aside and proceeded to move across the room toward the two men who were playing this game called Backgammon, making sure not to bump into any tables and upset games already in action. By the time I had reached them, they were already into their fifth game, so I sat by quietly and watched. They were playing with 30 round pieces (15 per man) on a board which was designed with 24 triangular playing positions that were colored alternately — and in this instance, the colors were red and white. As I continued to gaze upon this fascinating two-handed game, I realized that I had seen this kind of board game before. But where? So I put my “recall” into play and became reminiscent of my childhood and the games I used to play. One of the games I remembered was checkers. Oh yes, I remembered checkers very well because, on the block, I was queen of the checkerboard. I won checker games hands-down. Anyway, on the other side of the checkerboard was another game we kids never played, and as I remember, the board looked exactly as the one the two men were playing on now.

I beat you again, Brother said Grover triumphantly, snapping me back to reality. (By this time, we had all been introduced and the two players were Michael and Grover.) Well, I decided to try my hand at this interesting game,  too. They both said it was an easy one to learn, and that although there is a certain amount of luck involved, it was by no means a game of all luck. Well, I was ready to play. Grover, explaining the game before I could begin, said that my main objective in Backgammon is, first to move my men around the board until I have all of them in my own inner table, and second, to “bear them off” before my enemy (Michael) is able to “bear off” all of his men. If when I bear off my last man and Michael not only has not borne off a single man, but has one or more men in my inner table or on the bar, I will have won a Backgammon. What? My anxiety to play became more intense, but Grover’s rhetoric continued. “One more thing,” he said with a smirking smile, “The trick is that you and Michael have got to move your man in opposite directions around the board, and you must make sure all of your men are covered.” What? “Well, let’s play a game and you’ll see what I mean.” We rolled our dice alternatively, and moved our men around the board in opposite directions, just as Grover had said, matching the numbers upper most on the two dice. Into the wee small hours of the morning we played game after game, and needless to say, I lost each and every one of them, too. (Now, now, you must remember, I was just a beginner!) The more we played the more I wanted to continue, but as with almost everything else in life that one enjoys, the party had come to an end too soon. In spite of my previous expectations, I must admit that it was a fabulous party idea, and very rewarding to say the least.

On the way home, I realized a few things about Backgammon. It is one of the few games involving both luck and skill (which I undoubtedly lacked) that allows each player to see what his opponent is doing. Your plan of campaign must be to improve your position at the expense of your opponent’s and you only hope (and pray) that the roll of the dice will be in your favor.

The next day, my eagerness sent me in search of a Backgammon set. In my hot pursuit, I found that Backgammon sets were made of all types of materials and qualities; they ranged from very cheap to very, very expensive. While the quality of my game, at such an early stage, would depend in no way on the quality of the set I would purchase, the amount of satisfaction I knew I would get from playing with it, did. Once I had learned the game, I felt it was time for me to consider buying a reasonably good set, but I didn’t want to go overboard as a beginner. In a furniture store window (yes, furniture store!) was a beautiful living room setting with a butcher block, Parsons-type coffee table in the center. As I moved in closer to view it. I could see that the center of this table contained a Backgammon inset, with a large piece of glass the size of the table itself, covering the game-board. The price of this Backgammon table was a mere $465. (No, I didn’t want that one.) In a well known department store’s game section, I discovered that if I wasn’t in too much of a hurry, I could make my own Backgammon set. Are you ready for this? A “Hook Rug” Backgammon board — 6′ x 6′ rug, in addition to making out of Felt, the cups, the men and the dice. The cost for this treasure was $239 (No, I didn’t want that one either). My trek finally led me to a small stationery store where I purchased a set for about $20. Now, my next step was to find a partner. After I got home and read the instructions, which vaguely touched on the origin of Backgammon, my curiosity and eventual addiction to the game, inspired me to do a little research. Finding a partner would have to wait. After all, I think it’s important to know some background about all games.

Backgammon is an old, old game. It’s certainly older than all card games, and possibly even older than Chess — the Grand Master of all games. It is, after all, a dice game and dice have been used since the beginning of civilization. Well, after finding out this little known tidbit, I went even further and found that in the early 1920s, five game layouts, which bear some resemblance to modern Backgammon boards were discovered in a royal cemetery called UR, in Chaldees (an ancient region in Southwestern Asia, on the Euphrates River and the Persian Gulf) and probably date from as early as 3,000 BC. These layouts “were made of wood, intricately decorated with a mosaic of shell, bone, lapis lazuli (an azure-blue semi-precious stone), red paste and red limestone set in bitumen (an asphalt tar), adorned with animals and rosettes.”

Originally, Backgammon was called “a game played within the Tables,” or more simply, Tables. The ancient Roman played Tables, but it was called Ludus Duodecim Scriptorum which was a 12-lined game for the 12 points on each side of the board. The Romans had all sorts of vices and one of them was gambling. The Roman emperor, who was a big gambler, is said to have turned the Imperial Palace into a grandiose gambling casino and that at one point, he was losing so badly at Tables, he appropriated a large sum from the Imperial Treasury, “Ostensively to finance an expedition to the African provinces,” promptly went back to the Tables and lost every cent. (Well, I’m sure the Africans weren’t too eager to see him anyway.)

Thousands of years later, the Egyptians were also “enjoying a board game called Table” that may be an ancestor of Backgammon. Wall paintings in Egyptian tombs portrayed people playing the game (common people as well as the aristocracy).

But where did the first version of Backgammon come from and how did it get its name? First, let us address ourselves to the first part of the question: a reasonable guess would be that Backgammon originated either in India or China because they are the two civilization from which we have inherited most games. Each one produced a game of skill: the Indians gave us chess and the Chinese played a variation of chess. Some writers have suggested that the invention of Backgammon belong to the Indians because of their game board used in Pachisi (better known to us as Parcheesi) that resembles our Backgammon boards — but there is no concrete proof. The second part of the question is that in Middle English (17th century), baec means back, and gamen means game. So it is a game in which you first want to go back home and back off the board again, and second, you may be forced back (to the bar) to start over, which is a part of the game today.

Anyway, Tables, or Backgammon if you prefer, spread throughout society in Europe. The bars, or I should say Inns as they were called, managed to attract their customers by providing them with boards, men and dice. Ironically, in this day and age, almost every bar, disco and family home provide the same things — games, especially Backgammon and rooms to play them in — game rooms. Now that I had a Backgammon set, I had to attract a player too. It was an easy task because Backgammon was beginning to take hold in some circles, and it wasn’t long before all of my friends were into the game too. I played as many variations of game as I could learn, from sun up to sun down, day in and day out, including Acey-Deucy and especially Russian Backgammon. (This variation is when both players enter the board on the same side and move around the board in the same direction). Give it a try, you’ll love it. Well, it has been one whole year since I attended that Christmas party of Games Only, and all I can say is: Game fans I’m prepared now. It’s your move.