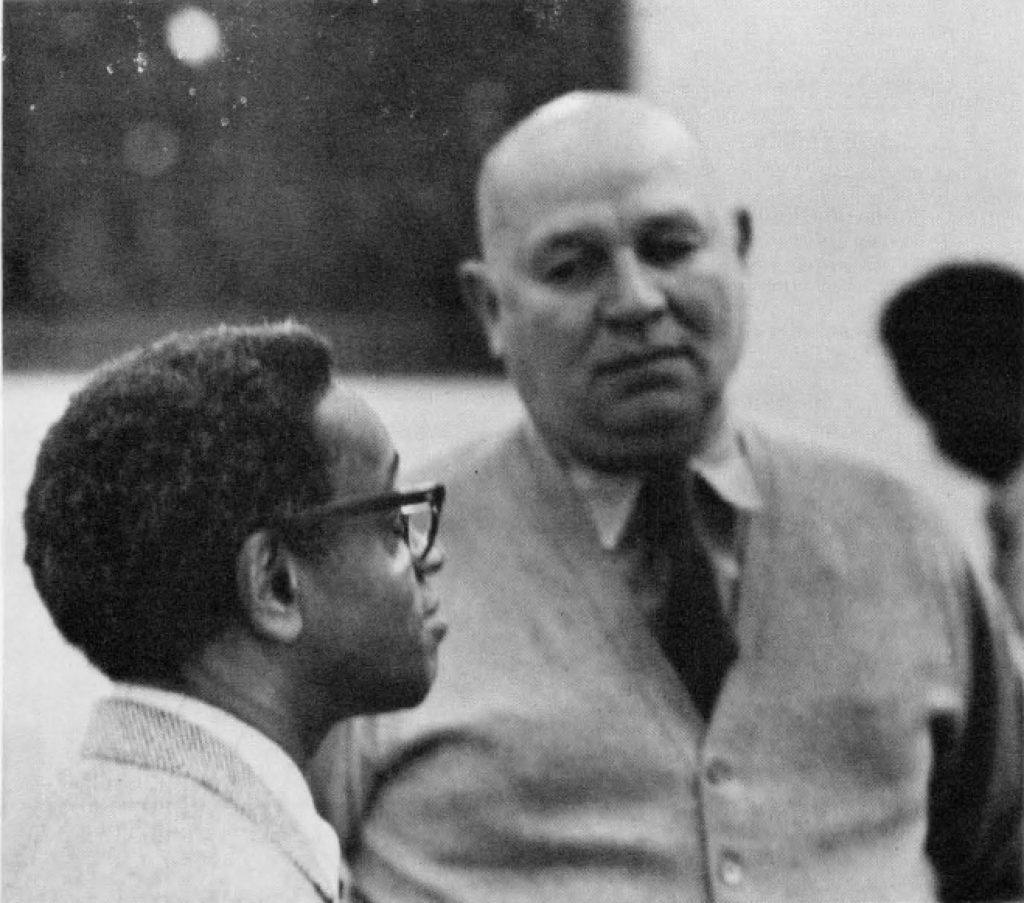 The field of Black Arts is all around us in this city — just take a look at the activities available in the pages of ROUTES! However, one of the unique qualities of this department is that what we present in the arts, for your consideration, requires only your time, effort and a kindly donation. Go to the Studio Museum and see some magnificent Black architecture that is over 1500 years old; the African-American Institute for excellent examples of contemporary African sculpture and paintings; and the Songwriters’ Museum for examples of contributions made by Black Americans to our musical heritage. The diversity of presentations like these is unending in New York, and for that, we are fortunate. Your patronage is the driving force that will ensure their continuation.

The Studio Museum of Harlem at 125th Street and Fifth Avenue, is currently presenting two very exciting shows. Both are completely different in feeling, but both are of great significance to Black art and culture. One show is entitled The Black Artist and the W.P.A. — Chicago and New York, and the other is The Stone Churches of Ethiopia. The first serves as contemporary history and the latter, centuries old examples of art and architecture in all its grandeur. Of equal importance to these shows is the recent appointment of the Museum’s dynamic new Executive Director, Mary Schmidt Campbell. She has come to the Museum from the Everson Museum of Art in Syracuse where she was curator of art history. During this same period, she completed her Ph.D. at Syracuse University with a dissertation on the work of the Black collagist Romare Bearden. Mrs. Campbell is one of the few women in the country to head a museum and at 29 is probably the youngest. In talking with her about her plans for the future, she indicated that she wants the Studio Museum to become the center for scholars to study and learn about Black artists, to have a scholarly library and afford the kind of facilities that will foster research. If her current enthusiasm for this project is any indication, she most certainly will accomplish her goal. At the present time, the Museum is fostering an academic atmosphere with their Artists in Residence Program, which provides both a stipend to the artists and studio space on the premises. In addition, the Museum is continuing its program of education in the arts at the secondary school level.

In the show The Black Artist and the W. P. A., you will find an outstanding assemblage of paintings, sculptures and photographs that were all done during the period 1934-1943. The Federal Arts Project afforded the artist the opportunity to work full time at his craft while being paid by the Federal Government. Included in this show are such Black Masters of Art as Jacob Lawrence, Norman Lewis, Charles White, Huey Lee Smith, Rex Gorleigh, Gordon Parks and Ernest Crichlow. (For examples of the work of the latter two artists see October, ROUTES.) For this show the guest curator has been Ruth Ann Stewart of the Schomburg Center for the Study of Negro Life and History. To more fully appreciate this period, there is an accompanying narrative description of each piece which helps in understanding the impact of the W. P. A. on Black artists in Harlem and Chicago. In addition to the Studio Museum’s exhibit, there are also W. P. A.  related showings at the Jewish Museum, Parsons School of Design, the Henry Street Settlement House and the Grey Art Gallery at New York University. This is indeed a very fine diversified show of an important period in the history of Black Art.

The other show at the Studio Museum is entitled The Stone Churches of Ethiopia — and what a show it is! Although spectacular color photography is the artistic medium used for this show, it is African architecture 1500 years old that is spell blinding for the viewer. Mr. James E. Payne, the artist/photographer, presents us with views of eleven remarkable stone churches that have been carved out of bed-rock below the surface of the earth. They are unlike all other Christian churches, in the same period of history, that were erected from the ground up. After viewing this show you can’t help but have a feeling of gratitude to Mr. Payne for his efforts in recording and, recognizing these works of art. He first came upon them in 1973 on a visit to Ethiopia, and since then has returned for two more visits. It is not just the subject matter that is important, it is his sense of color, texture and composition that make each photograph a work of art. Mrs. Campbell in her Museum program notes captures the essence of this show by saying that: “He has not limited himself to recording only the churches; instead, he has documented the religious objects, intricately carved silver crosses, painted tablets , richly woven, brightly colored vestments worn during religious ceremonies, as well as the priests and celebrants. He has captured the serenity and beauty of the rocky terrain of Northeastern Ethiopia and the simplicity of the people of Lalibela whose lives remain virtually untouched by the 20th century.” Both of the above mentioned shows will close the middle of January.

Approximately eighty sculptures, painting s and graphics by twenty African artists who are living, teaching and working in the United States are being displayed in African Artists in America, a major exhibition at The African-American Institute, 833 United Nations Plaza (First Avenue at 47th Street) in Manhattan. It is indeed an excellent exhibit of the work of some outstanding and talented artists.

The 20 artist represent it in the exhibition include 18 men and 2 women who have come to the United States from 10 African countries: Ethiopia, Ghana, Kenya, Mali, Nigeria, Senegal, Sudan, Tanzania, Togo, and Uganda. The majority of them are established artists who have received advanced training in Africa, western Europe and the united States and whose work has been exhibited and published widely. Also represented are some very talented younger artists who are mainly graduate students at US universities.

Almost all participating artists are affiliated with US academic institutions , including such colleges and universities as Howard University, Indiana University, Morgan State, Ohio State , Olive-Harvey College, Pratt Institute of Fine Arts, Rutgers University and others. The artists represented in the exhibition were selected from a larger number identified over the past year by the guest curator for the exhibition, Tritobia H. Benjamin, Associate Professor of Art at Howard University.

In the catalogue, which Ms. Benjamin also prepared for the show, her notes deal with such questions as why African artists have come to America, how they are earning their living, their relation ships to Americans — especially Black Americans — and the extent to which their current work can be considered African, American, or international. Basing her program notes on interviews with the participating artists, biographical data and examples of their work, Ms. Benjamin observes in part that many of these Africans have come to America to complete their education or find employment. Their occupations range from professor to consultant, free-lance artist or student and that their relationship with the America community “has been one of respect and acceptance” and that their work is “profoundly sound in techniques and of high quality” with a ” flavoring of their work that is at once international and African.”

African Artists in America is the twelfth exhibition of African art to be organized at the African-American Institute since 1973. Following the show here in New York, (it will close January 14th) it will travel to museums and galleries throughout the United States under the auspices of the Smithsonian Institution Traveling Exhibition Service. Since the Institute is the principal US private organization that is working to inform Americans about Africa and further African development, the exhibit of the work of these very talented people is well worth your attention and time.