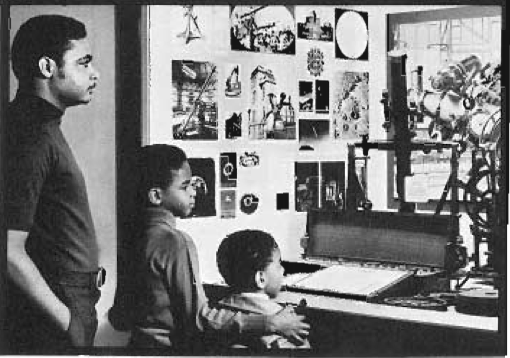 Remember the place that your school teachers took you to visit, that had all the huge animals and colorful displays of people from faraway places and many intriguing artifacts all around its great rooms? Well, it’s still there at Central Park West at 79th Street, alive, well and better than ever — The American Museum of Natural History.

The first building of the Museum at its Central Park West location opened one hundred years ago as of December 22, 1977. To celebrate, the Museum will offer an exhibition of early photographs and other memorabilia. The exhibit entitled We’ve Been Here A Hundred Years will show throughout January 1978 in the Hall of the Northwest Coast Indians. Sharing this anniversary exhibition with your children would be a great way to begin exposing them to the excitement museums can offer. The Museum of Natural History is a place you can revisit and revisit and never cease to find enjoyment while learning.

A big favorite among children are the dinosaurs. Two large rooms of these ancient reptiles with their overwhelming size and strength will fascinate a child of any age. More importantly exhibits like these whet the appetite for knowledge and give some children the impetus to read.

The Museum has a new Hall of Reptiles and Amphibians where you and your adventurous youngsters can explore the world of Komodo dragons, a 25-foot python, two enormous crocodilians, a huge loggerhead turtle skeleton and a large female leatherback turtle. This new Hall also features a section on the interaction between reptiles and man, ways to avoid close encounters, treatment for snakebite, and a reptile drink. That’s right, a drink called “Old Mam.” Even though your scouts may never venture far into the wilderness or sip the juices of a snake, just think of what fun that imaginary trip could be.

Besides its traditional exhibits of beautiful art treasures from other museums around the globe, and rare coin collections there are film festivals concerts, lectures and workshops. Some of the after school and weekend workshops feature puppet making, African mask making, small crafts of Africa, African languages, and others. These workshops are offered without charge and are designed for children ages 6 to 12. The Museum is not just a place of things past, it is a very now place — offering youngsters many programs that they can see and hear. African storytelling sessions might easily become a favorite choice of your children. Many stories will be told by Ms. Theresa Moore, African-American studies assistant in the Museum’s Education Department. Ms. Moore, a native of Ghana, is an accomplished teacher and a wonderful storyteller and through her talents exposes young children of varied ethnic backgrounds to lifestyles of African children. Though many of her programs are for organized groups of children ages 5 to 12, some are offered to individual children.

For the scientist in your family, the Alexander M. White Natural Science Center is of particular interest. The center introduces young people to the variety of nature that exists in New York City. Exhibits include small live animals. There is always a staff member present to assist and explain.

Last January, the Museum opened a permanent, weekend Discovery Room. Designed especially for children aged 6 to 12, the area uses individual discovery kits to introduce the youngsters to a wide variety of human and scientific experiences. The Room is modeled after a concept originally developed by the Smithsonian Institute and is in keeping with a popular trend that encourages learning through doing. Each kit in the facility is a form of a learning game. Feel and Guess, for example, challenges the experimentally minded child to put his or her hand into a box and guess what’s inside, it’s nothing harmful. The Discovery Room has a Reflections Kit and a Skull Kit and, of course , a Mystery Kit whose contents I will keep a mystery so as not to spoil the surprise.

The American Museum of Natural History which presents so well things that are of the earth, presents equally well things that are of the heavens. Their vehicle is The Hayden Planetarium. A series of Sky Shows are presented throughout the year. It’s About Time is a show that illustrates how heavenly observations offer civilization a way of keeping track of itself. It answers such questions as: How is the movement of the earth recorded? What year had 445 days? What, actually is time? Star of Wonder,  a show that has delighted New Yorkers for more than 40 years is the Planetarium’s holiday season show. It takes visitors back 2,000 years for a look at the sky of Bethlehem at the time of Jesus’ birth. Look Up in the Sky is a program specially designed for young people. Presented live in the Planetarium’s Sky Theatre , the discussion spans such topics as why the sky is blue, why the moon appears to change shape in the sky and the reasons for the seasons. Each show is different and features an interesting survey of the current seasonal sky as seen from the New York City area.

The American Museum of Natural History is a place of yesterday and tomorrow. It’s a pleasurable, informative , exciting journey that clearly marks mankind’s progress. There is so much to share with your youngsters and so much they can experience on their own. School education departments have only opened the doors to the knowledge and enjoyment that is to be gained from museums such as this one. You, the parents, can walk them through those doors.

Note: If you hurry out the moment you’ve read this issue of ROUTES, you might still get a chance to see the Museum’s beautiful origami-decorated (Japanese art of folding paper) Christmas tree. The tree is 25 feet high and is covered with 1,500 hand made ornaments.