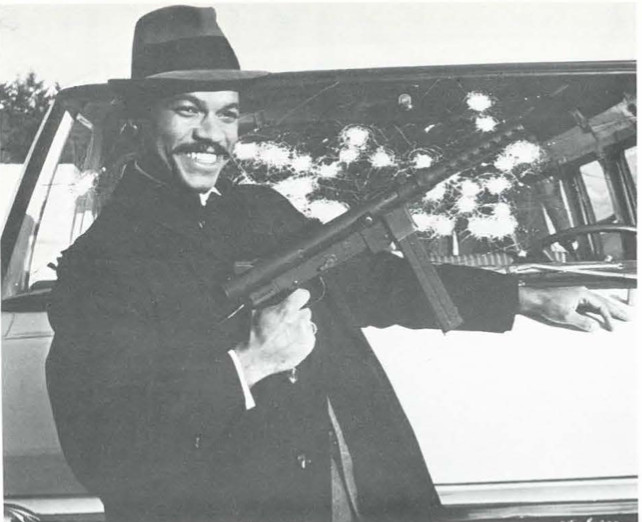 Hollywood’s attempts to reflect changing times through the eyes of barflies and fun-seekers invariably suffer distortion; its make-believe hangouts are generally as stereotyped as the stars and extras who inhabit them. But if such scenes fail to accurately mirror life, they do — by default — reveal the American film industry’s attitudes toward various segments of our society. If, to cite a pertinent example, future historians should want to know how Hollywood regarded Black Americans, they need but screen these scenes in order to, so to speak, get the picture.

In all fairness, there have been some good black pictures, but the percentage is alarmingly in favor of junk. In the early part of this decade, when Hollywood discovered that black films could be a sound investment, quality was sacrificed for quantity. Most of the films that ensued were an insult to anybody’s intelligence, and they did no more to improve the image of black people than that infamous watermelon contest newsreel of many decades ago. However, bad as they were, the sheer novelty of films portraying blacks as anything other than loyal, grateful domestics was enough to form lines at the box office — at least for a while.

Hollywood’s entry into Black films may have been well-intentioned at first, but there came a time when such films began to be aimed specifically at a Black audience, and that’s when blatant exploitation took over. Shaft, Cleopatra Jones, Superfly, Coffy, and other such shallow fictional heroes were created (by Blacks as well as Whites) for action movies that were designed to appeal to the simple-minded — Hollywood filmmakers obviously equated the mentality of Black moviegoers with that of its mindless screen characters. Accordingly, they administered an over dose of Pam Griers, Richard Roundtrees, Tamara Dobsons and Jim Browns — new, manufactured stars whose looks exceeded their ability to act — while they overlooked the Barbara Montgomerys, Morgan Freemans and Ethel Waters, people who have spent years of hard work perfecting their stage craft.

As their productions bear out, Hollywood filmmakers see violence, drugs, prostitution and abject poverty as essential ingredients of Black films. That attitude also surfaces elsewhere, as in a 1972 reader’s report from the files of Warner Brothers. Film companies often employ readers who check advance copies (or galleys) of books to determine possible cinematic value; the Warner Brothers report on Bessie, Chris Albertson’s biography of blues singer Bessie Smith, was submitted at the height of Hollywood’s Blacksploitation period.

It gives a fairly accurate synopsis of the story, indicates that Bessie Smith was an extraordinary a person as she was an artist, and rates the book as having high production value from a film standpoint. Then, quoting two lines of dialogue from the book, the reader explains why she does not recommend it as a film. The quotes she chose to extract and the rationale that follows are indicative of Hollywood’s attitude towards black films:

Two priceless lines (sic), but they don’t make a movie. . .Bessie Smith had a happy and successful life; she didn’t work in whorehouses, she went to them. She was never really broke … so this is hardly the six-handkerchief drama of Lady Sings The Blues. If it were done at all, and faithfully, it would have to be a bawdy, boisterous comedy, and that might offend a lot of devotees.

To see the life of Bessie Smith only as a boisterous comedy is tantamount to envisioning a musical based on terminal cancer, and if Lady Sings the Blues  —  the reader’s ’ yardstick  —  did not offend Billie Holiday devotees, nothing ever will.

When black films ceased to make money, it was not because people had tired of seeing black faces on the screen, the novelty had simply worn off — bad actors, plodding through ridiculous plots filled with underworld characters could no longer sustain the interest of the majority of moviegoers. There was a simple solution, of course: Hollywood had but to upgrade the quality of its black films, but it chose to phase them out instead. The result is that most real black talent is still being overlooked, and those who got their foot in the door on no more than their looks or some unrelated reputation are moping in the film capital, wondering what happened to them. It would be easy to blame it all on racism  and there are those who do, but it isn’t all that simple. While film making is an art, it is first and foremost a business — at least in this country. Therefore, if Eskimo pictures were suddenly to become popular, Eskimo pictures is what Hollywood would grind out; Hollywood has always thrived on fads, and these fads are most often of their own making; as soon as something works at the box office, it is driven into the ground through saturation. It happened with blacks just as it did with surfers, teeny-boppers, giant insects, and — to take the most recent examples — young girls in shaky beds, and disco freaks.

This is not to say that racism didn’t enter into the waning of black films — it did, but often in subtle ways. A few years back, before the Great Hollywood Black Rush began, Bill Gunn [whose credits include the screenplay for The Landlord  and the play The Black Picture Show] wrote and directed a film called Stop for Warner Brothers. The picture [never released] dealt with two couples, including one black woman [played by Marlene Clark], but the black character’s race never figured in the plot — the lady just happened to be black, and that was that. As company officials in Hollywood viewed the daily rushes [flown in from location in Puerto Rico], they were shocked. Having, of course, approved of the script, they simply assumed that all four characters would be white. Why, they asked Gunn, is this woman black? ‘‘She just is,” he replied. Puzzled and somewhat perturbed by this, the powers at Warner Brothers then suggested that Gunn could at least have Marlene Clark bare her breasts!

Hollywood is still not ready to cast black actors and actresses in roles of any importance unless such roles specifically call for a black character, but, in the past, they have thought nothing of casting whites as black characters — that, of course, is racism.

But if White Hollywood is unwilling to make quality black pictures, what about Black Hollywood? If it did nothing else, the black picture boom placed certain blacks in a position of relative power: Sidney Poitier, Bill Cosby, Jim Brown, and others, have both money and influence that could be channeled into the making of worthwhile black films. Then, too, there are several black-owned, multi million-dollar businesses that could invest in such films; they are not in the film business, of course, but that didn’t hinder such white companies as Faberge and Mattel Toys from investing. True, such recent productions as A Piece of the Action, A Hero Ain’t Nothin’ But a Sandwich, and Youngblood are to be preferred over Coffy, Superfly, and Cleopatra Jones, but, while they are professionally produced, well-acted features, they still highlight the negative sides of the Black Experience.

Perhaps The Wiz will change the direction of black films, take it away from thin plots dealing with drugs, pimps, and chrome-plated handguns. But The Wiz is, after all, pure fantasy, and there is a real side of black life that continues to be overlooked, a side that has not been translated into film language since 1964 when Nothing But a Man [starring Ivan Dixon and Abbey Lincoln] appeared, and quietly slipped into undeserved oblivion.