Disco divas come and go. Some stick around only long enough to make a one-record splash, others have a fame-expectancy of a year or two, at most, and an inordinate number of these ladies are mere tools in the hands of arrangers and technicians who know just what it takes to get people out on the dance floor and into the record shops.

The realization of this often puts singers of disco hits on the defensive, for while the thump-thump beat is the hottest thing going in the record business today, most people who are directly involved in churning it out know full well that it is a formula music destined to become as passé as the cha-cha of the Fifties and the twist of the Sixties; singers also know that they are, so to speak, riding to stardom in the back of the bus, and some of them are downright embarrassed about that, especially those whose vocal ability stretches beyond the limitations of disco. 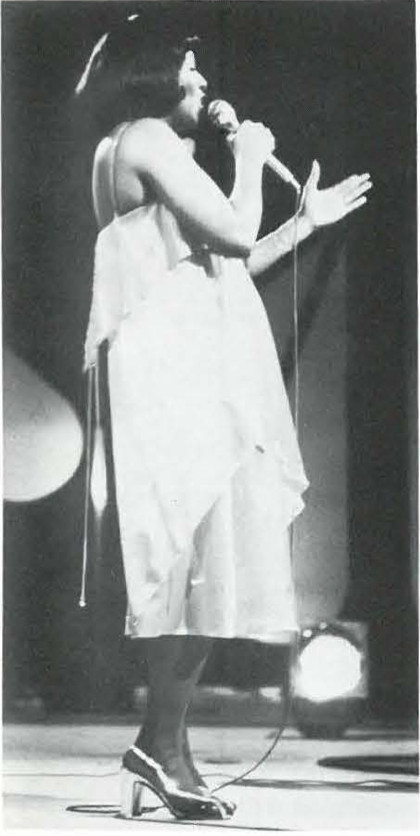 Carol Douglas knows that what she can do and what she is doing are two different things. “I don’t consider myself a disco artist,” she says defensively. “Disco just happens to be something that is happening to me right now, but I really just consider myself a performer, period.”

Having been in show business for more than twenty years, Ms. Douglas — whose current hit, Burnin’, is doing just that wherever disco records are spun — has every right to make such a claim.

Born Carolyn Strickland in the Bedford-Stuyvesant section of Brooklyn, her mother was a singer who traveled extensively with U. S. O.  shows, and sang with some of the best bands of her day. “My mother passed away last July, and it’s really to her that I owe my talent,” Carol Douglas explains. “She inspired and encouraged me, because she always wanted to be a star herself — she sang with the bands of Cootie Williams, Erskine Hawkins and Duke Ellington, and she kind of lived her life through me.

“I used to say that I wanted to be a nurse, but she said, ‘Oh no, you’re going to be a star,’ and she just kept pushing me and pushing me and pushing me until I finally made it. I just thank God that she lived long enough to see me become successful.” Mrs. Strickland began charting her daughter’s course when she enrolled her — at the age of five — in a dancing class at the Charles Lowe School of Theatrical Arts.

“My ballet teacher there was Mr. Lowe’s daughter, who was a niece of Joan Crawford.” she recalls, “And one of my classmates was Bernadette Peters. We used to appear in kiddie shows that Mr. Lowe produced for Macy’s department store”.

Lowe’s school was then located at 1650 Broadway, a building that has played a significant role in Ms. Douglas’ career. “I should be living there,” she says, jokingly, “because I went to dancing school there, I had my first professional photos taken in that building, my record company, Midsong International, has its offices there, and it was in the lobby of 1650 that I first met Mark Barkan, the man who wrote Burnin’.”

She was a teenager when she first ran into Barkan in that lobby, he asked her to make some demo records for him, which she did, though nothing positive ever came out of that. Since then, he has written many of the songs that have appeared on Midnight, Full Bloom and the current Burnin’, the three albums Ms. Douglas has recorded for Midsong International so far.

At the age of ten, Carol Douglas — then still known as Carolyn Strickland — appeared on an early version of television’s Name That Tune, winning a scholarship to Hunter College [She was, of course, too young to take advantage of that at the time, and when she reached college age, show business had priority].

That year she, also won the Apollo Theatre’s famous amateur contest, the prize being a week’s engagement at the theatre as a singer and tap dancer. “I was studying with Henry Le Tang at the time,” she says. “He’s very popular today, and I think he’s a fantastic choreographer.”

Among her fellow pupils at Henry Le Tang’s studio were Maurice and Gregory Hines, who are currently enjoying great success as stars of the Broadway musical Eubie!

Seemingly still awed by her own success, Ms. Douglas is quick to point out the many successful people she shared classes with as she prepared to climb the show business ladder, including Patty Duke and Marcia Strassman [Welcome Back, Kotter], who were among her fellow students at Quintano’s School For Young Professionals in the Sixties. 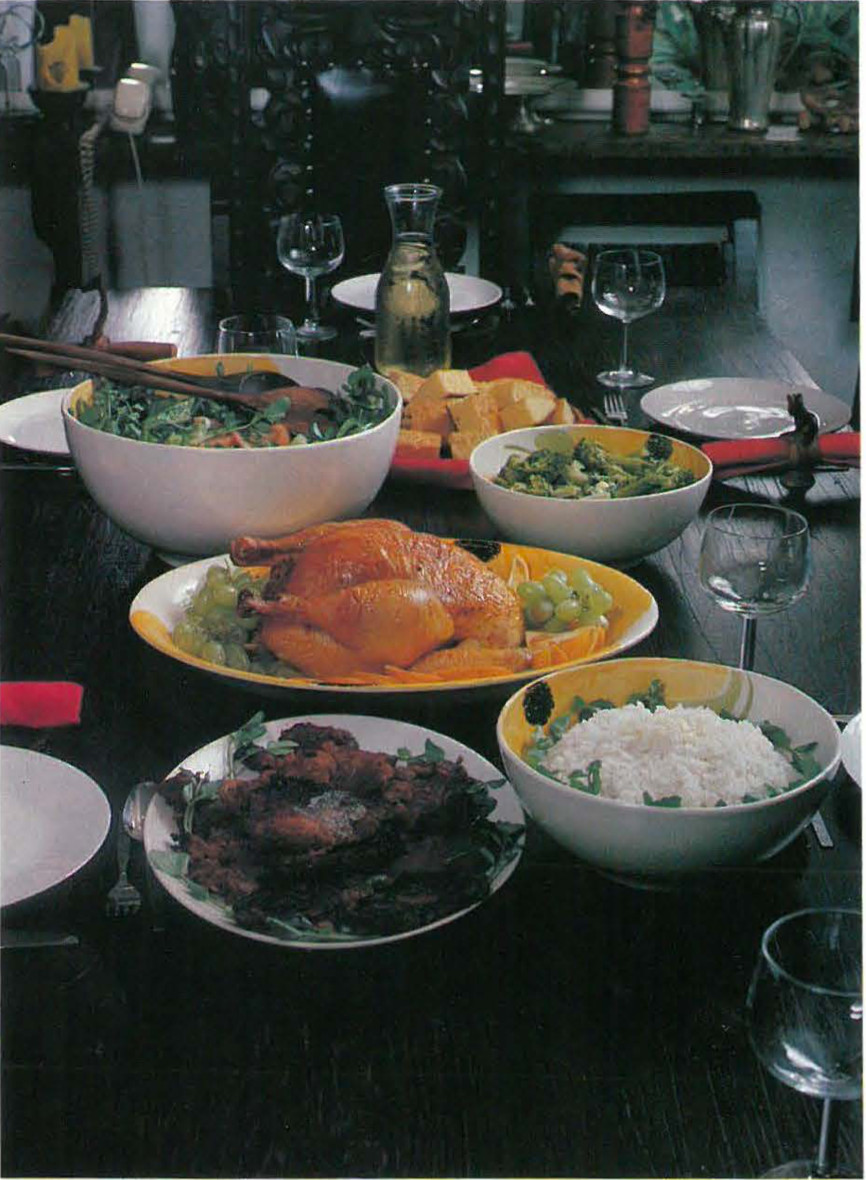 At Quintano’s, Carol Douglas studied acting, learning a skill that as a teenager brought her small roles in the 1959 films That Kind of Woman [starring Sophia Loren and Tab Hunter] and Odds Against Tomorrow [starring Harry Belafonte and Robert Ryan], and in two off-Broadway shows, Moom On a Rainbow Shawl [with James Earl Jones and Cicely Tyson] and One Tuesday Morning [starring Clarice Taylor].

But it was her singing that would eventually bring her the spotlight, in the mid-Seventies. As she puts it, “I had studied in this business all my life, but things didn’t really begin to happen for me until I met Eddie O’Laughlin from Midsong International, he picked me to do Doctor’s Orders, the song that changed my life. Next thing I knew, I was traveling to Europe, doing TV shows, and things like that. It was very exciting, especially in Rome, where I did a one-hour special that was Italy’s first color TV show.”

Since 1975, Carol Douglas’ concert tours have taken her throughout Europe and to Central and South America; she has shared billing with numerous big stars, from Teddy Pendergrass and Eddie Kendricks to Van McCoy and John Travolta, appeared on most major TV shows here at home, and received the coveted ASCAP Award, but she still regards herself as “a regular housewife and mother.”

She is, of course, not exactly a regular housewife and mother, for regular housewives and mothers don’t make concert tours and hit records, but neither does Carol Douglas fit the image most people have of celebrated performers.

She, her husband, Roland Brown, and her three sons [the two oldest of which are from a former marriage] live in the not-exactly-fashionable Flatbush section of Brooklyn, they travel by subway around the city, and the lady who sets people throughout the world in motion with her Burnin’ spends a good deal of her time in the kitchen cooking.

She says, “I cook every day, that’s really my favorite thing, because my mother was a real southern cook, and she handed all those great recipes down to me. I’m looking forward to making a lot of things for Christmas this year, because I was singing in Florida last Christmas, but now I’m back into the pots.”

Before she can do her Christmas cooking, however, there is a December promotion tour of Europe that has to be taken care of, but Carol Douglas is used to switching from stage to stove, and she is refreshingly not affected by her success on the former.

I recently had the opportunity to sample Carol Douglas’ cooking when she prepared an unpretentious, thoroughly delightful dinner at the Midtown Manhattan loft studio of Don Lynn, who began photographing Ms. Douglas prior to her success as a recording artist.

“He wasn’t very complimentary when we first met, those many years ago,” she recalls. ” He said I was overweight, that my skin was bad, and so on, but I guess I’m good enough for his camera now.” They laugh about that first meeting, and, Lynn admits that his photographic skills also left something to be desired in those days.

For a small group of dinner guests that included controversial writer Orde Coombs — who was then researching a story on WKTU, New York ‘s successful disco station from whose turntables Burnin’ sounds with clockwork regularity — the disco diva prepared a sumptuous meal of stuffed, roasted chicken, broccoli, sweet potato pancakes and salad. It was all as delicious as it looks in Lynn’s photos on these pages, and we asked Ms. Douglas to share the main recipes — handed down from her mother — with ROUTES’ readers.

Butter, salt, pepper and paprika Make a pan of cornbread and put aside
Cut up onions and green peppers
place in small pot along with the giblets you removed from the chicken — covered with water [at least two cups] and boil slowly for ten minutes, then put aside to cool.
Break up cornbread into a bowl, add the all-purpose stuffing mix and [having drained off all but 1 cup of the water] then boiled giblets, onions and green peppers.
Knead together and stuff in chicken which has first been seasoned well with salt, pepper and paprika [you can also add Accent if you wish]. Once the roasters are stuffed, drench them in butter, place them in an uncovered roaster pan, shove them in the oven and let them stay there for two hours at 325°.

Mix all the ingredients [except the Crisco] in a large bowl, using a potato masher, until it has the consistency of a batter.
Place Crisco [or equivalent] in a frying pan and heat until hot enough for frying. Spoon in the batter, and cook until golden brown.