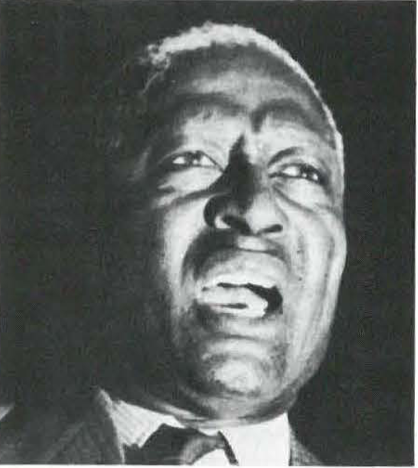 There can be little doubt that Leadbelly — born Huddie Ledbetter in Louisiana, in the 1880s — was one of the greatest folk singers this country will ever have known, and it is therefore all the more tragic that he was never allowed to reap the full harvest of his exceptional talent. Instead, he became the victim of unprincipled exploiters who transported him to New York City, exhibited him, sold his artistry for their own profit, and added insult to injury by blatantly publishing his compositions under their own name.

Unfortunately, much of what has been written on the life of Leadbelly [including Gordon Parks’ horrid, allegedly biographical film] is based on John Lomax’s Negro Folk Songs as Sung by Leadbelly, a defamatory book published in 1936. Leadbelly’s niece, Olli Robinson, who first met her uncle when she was a child in Louisiana, recalls him being so upset with the Lomax book that he made a successful effort to halt its distribution.

The damage, however, was done, and Lomax’s distorted image of Leadbelly as a dangerously violent, arrogant, whiskey-gulping chaser of women persists. “Lomax did not write nothing like I told him,” Leadbelly once wrote in reference to the book, and there is good reason to believe that. In fact, had Leadbelly indeed fit Lomax’s description of him, he would surely have thought nothing of killing Lomax. After all, Leadbelly had served time for manslaughter in both the Louisiana and Texas State penitentiaries, a fact usually played up by writers who inevitably fail to point out that the American judicial system — especially in the South of Leadbelly’s youth — often has little to do with justice.

The image of Leadbelly as a tough killer of men and assaulter of women becomes even more ludicrous when one listens to some of the songs he wrote; it is hard to believe that a man so lacking compassion for others should have written such songs as Goodnight Irene; Bring Me a Little Water, Silvy; and Old Cotton Fields At Home. His niece remembers Leadbelly as a very kindly man who never raised his voice, except to sing, a man who had a profound love for children. “I never knew a man who liked people and wanted to be around them as much as he did,” she says, “he was hurt by what they wrote about him, but never bitter.”

John Lomax began recording Leadbelly for the Library of Congress in 1933, while he was still an inmate at Louisiana State Penitentiary. He brought him to New York in 1935, amid hoopla and hype disgracefully reminiscent of the King Kong scenario. The Associated Press wire service reported Leadbelly’s arrival this way: “Broadway impresarios were angling tonight for the services of a Louisiana swamp Negro called Leadbelly who twice has sung and played his way out of prison.”

Brought to New York by John A. Lomax, collector of folk songs, Leadbelly “wowed em” so effectively at his first performance that he brought booking agents on the run. A news-reel from that period showed Leadbelly, seated on a bale of cotton, being interviewed by Lomax in a blatantly patronizing manner. As he began a heavy concert schedule, Leadbelly drew glowing praise from the press; he recorded on his own and with such stars of the day as Sonny Terry, Willie “The Lion” Smith, Big Bill Broonzy, the Golden Gate Quartet, Cisco Houston, Josh White and Woody Guthrie.

Many performers began to add his songs to their repertoire, which alone should have given Leadbelly financial security, but the money was going into the wrong pockets and so one of America’s greatest artists lived in a small Lower East Side apartment while his wife, Martha, toiled as a maid in a New York hotel.

Huddie Ledbetter was a masterful singer and composer of blues, but his artistry stretched far beyond that— he could write tender songs of love and he could assault the establishment with hard-hitting social commentary. He was also an extraordinary guitarist, and he had a marvelous way of getting his message across with just a few words. He frequently began his songs with a spoken narrative, but misled promoters discouraged this in later years, claiming that his Louisiana dialect was difficult to understand. More difficult to understand, however, is how many of his songs either became public domain, or were accredited to Lomax, and totally inexplicable is the fact that this immensely gifted, popular artist spent his non-performing hours as Lomax’s chauffeur!

A few months after Huddie Leadbetter’s death — at Bellevue Hospital, December 6, 1949 — his song, Goodnight Irene, in a recording by Gordon Jenkins and The Weavers, rose to the top of the pop charts, where it remained for three months.