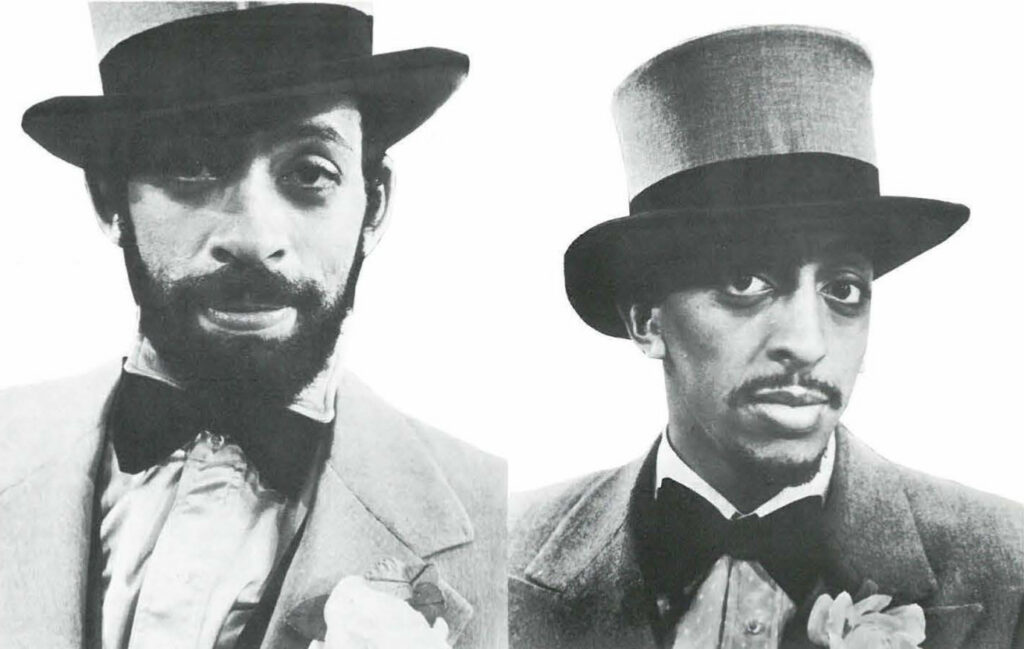 It was right after a matinée performance of Eubie! Broadway’s latest Black musical hit; the Hines Brothers — Gregory, 35, and Maurice, 33 — fresh from dancing their behinds off in the show, dashed out of the stage entrance for a quick between shows lunch. They didn’t get very far before they were stopped by four beaming, matronly black ladies who had just seen them perform.

“You were wonderful,” gushed one of them.

“I just love the way y’all dance,” intoned another.

Maurice and Gregory smiled graciously as their fans commented, their “Thank you” barely audible, but when the two remaining ladies compared them to the Nicholas Brothers, the reaction was loud and clear. “Thank you very much,” they responded, in near-unison, “that is one of the highest compliments anyone can pay us.”

Later, during an interview, I asked them why they felt that way. “Because they were one of the greatest tap teams that ever danced,” replied Maurice, the more outgoing of the two. “I could watch them dance all night, and the tap routine they did in the movie Stormy Weather still blows my mind — I watch it every time it runs on television.”

They are part of the great history of tap dancers who have never received their just due, added Gregory, the divorced father of an eight-year-old daughter. “Partly because we Black folks today have been taught that tap is something degrading, something we should bury in the past. Meanwhile, everywhere we go we see young white dancers studying tap every chance they get. Young Black dancers had better get with it.” Getting back to the subject of the Nicholas Brothers, Maurice mentioned that the Dixie Moon routine performed by the Hines Brothers in Eubie! is meant to be a tribute to their famous predecessors’ dance in Stormy Weather. “Of course,” he laughed, “at our age we can’t do all those incredible splits they did — we’d never get back up!”

In Eubie! the talented brother team virtually carries the show; each get a chance to strut his stuff — something as the saying goes — both individually, jointly, and with the rest of the company Gregory, whose very appearance elicits anticipatory laughter, has two memorable scenes: a wordless courtroom vignette in which he portrays a lecherous judge by way of gestures and facial expressions, and a segment in which he sings a gut-bucket version of Low Down Blues. The former has the audience howling, the latter demonstrates most effectively that singing, too, is among his many talents.

Maurice, a seemingly tireless performer who never slows down, gets his big individual moment later in the show when he burns up the stage with a song and dance number called You Got To Git the Gittin’ While the Gittin’s Good. When he turns his back to the audience and shakes his peach-shaped posterior, it proves to be more than some women can stand; at that particular afternoon’s matinée one lady actually jumped up and attempted to climb onto the stage, another called out her telephone number, but most just sit there and shout.

Though many people are now discovering the talents of Gregory and Maurice Hines for the first time, the two have actually been exciting audiences for many years. Born and raised in Brooklyn, they started dancing together at ages five and three, exhibiting enough talent to prompt their mother [Alma] — to enroll them in dancing classes, and to start taking them to auditions all over New York City. Their first tap teacher was Henry Le Tang, who just happens also to be the tap choreographer for Eubie! Maurice calls Le Tang The last of the tap masters, adding, we owe him a lot for keeping tap alive.

For fifteen years, Maurice and Gregory danced all over the United States and in Europe as The Hines Kids. Later they teamed up with their father — Chink, a drummer — to form a successful act called Hines, Hines and Dad; the lively family trio appeared in nightclubs and concert halls throughout the United States and Europe, made frequent TV appearances [including several on the Tonight show], and even recorded a Columbia album live in Paris, complete with an 18-piece band. Finally, in 1973, a combination of reasons led to the disbanding of Hines, Hines and Dad: their father’s retirement [he and Mrs. Hines now live in Las Vegas, where he works as maitre d’ at the Tropicana Hotel], and the fact that Gregory and Maurice had simply outgrown the group’s middle-of-the-road audience. It was the late Sixties, early Seventies, Gregory explains, and being a part of that generation, we stopped performing in formal dress. We adopted a more casual look and started using more politically-oriented material, changes which our traditionally inclined audiences couldn’t accept. Then, too, after so many years together, the Hines family had simply grown tired of working as a team.

Following the break-up, Gregory moved to California in pursuit of a musical career. Forming his own group, appropriately called Severance, he recorded an album of his own songs, but it and the group failed to catch on, so he soon found himself having to resort to such non-musical jobs as teaching karate and doing busboy chores. Maurice fared better. He studied acting while continuing to sing and dance in various small New York supper clubs, and he was able to combine his talents as Nathan Detroit in the road company of Guys and Dolls, and in Toby Time, an ill-fated revue based on the famous T. O. B. A. (Theatre Owners’ Booking Association), a Black vaudeville circuit of the Twenties the initials of which were popularly interpreted as Tough On Black Asses.

When Maurice heard that a musical revue based on composer Eubie Blake’s music was being produced, he rushed to audition for it, and suggested that Gregory do the same. Living proof of their success is to be seen on the stage of New York’s Ambassador Theatre (215 West 49 St.) nightly (except Mondays), and Wednesday, Saturday and Sunday afternoons (see review in ROUTES November issue).

Do we have a new Hines and Hines team? No, says Gregory, but that doesn’t mean we won’t be working together anymore. For instance, he adds with a grin, if Maurice is working somewhere and not drawing an audience, I’ll help him out, and I’ll also help him out if I’m working, and he needs a job. Maurice reacts with a look that seems to say that won’t be happening anytime too soon, my man. His ambition is to be able to do light comedy with the skill of a Giancarlo Gianinni.

Actually, after seeing their dazzling performance in Eubie! I seriously doubt if either of the Hines Brothers will ever face an employment problem, they are simply loaded with talent, and we’ve only seen them fire round two so far — a bullseye.