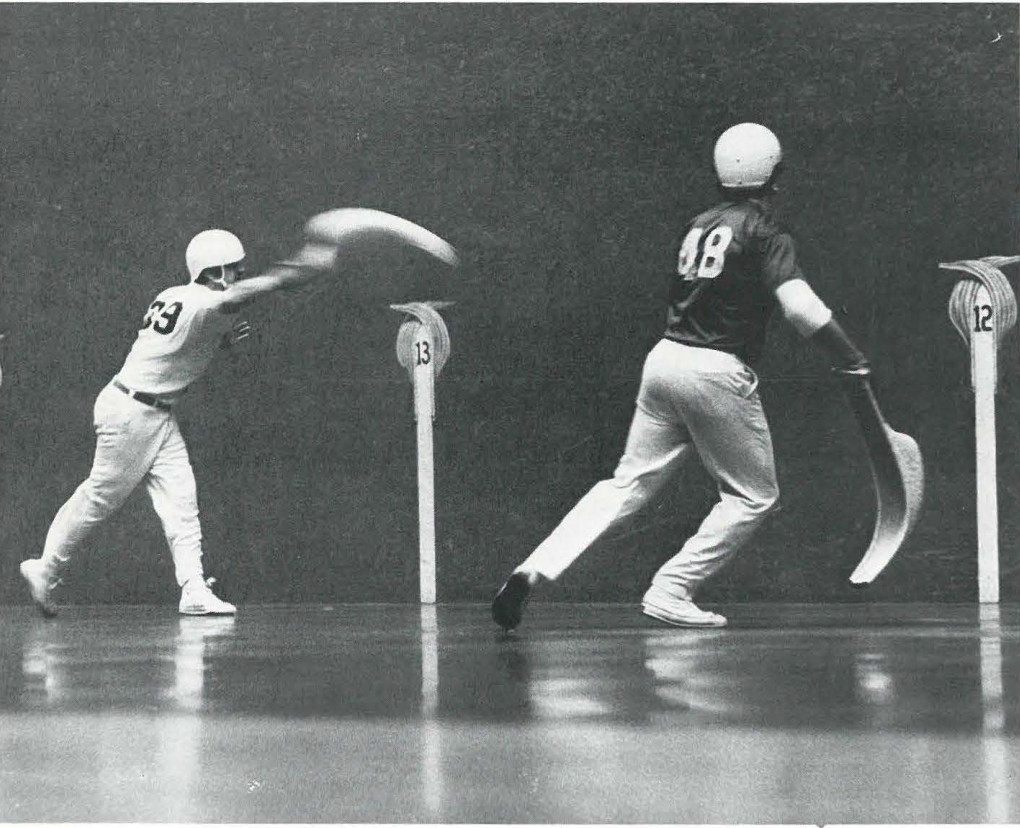 Jai-Alai, like horse and dog racing, is a gambling game. It also is an exciting one too. It is one of several sports that claim the title of “the world’s fastest sport.” This claim rests on the fact that the small hard ball (pelota) used in Jai-Alai (pronounced high lie) travels at speeds of up to 150 mph or 220 ft. per second. Now that’s faster than anything in sports, other than high-powered racing vehicles!

Before the end of April, you have to take a trip on the Connecticut Turnpike off exit 28 to Bridgeport. There you will find the fronton, frontis, pelotas, cestas, canchas, and quinielas, perfectas, trifectas, and pari–mutuels. Once you’ve learn the meanings of these words and understand the shots, the point system, how to bet, how to read the odds board, (Whew!), you then can become a part of this rousing spectacle, which excites a spectator’s blood stream like fever.

Watching and wagering on Jai-Alai for the first time is confusing, but the rules of the game and the betting are rather simple once you get the “hang” of it.

The ball is served and the opposing player in singles, or his partner in doubles games, must catch and return the ball after it hits the frontis. He can make the catch off the rebote if the ball has hit the floor only once. This shot is one of the more spectacular ones since it often causes the player to hurl himself to the concrete floor to give power to his forward throw: The action during a game is virtually non-stop; players must catch and throw continuously. The skill of the game lies in placing the ball out of reach of the opposition, throwing it at a tremendous speed, or imparting an incredible amount of spin (called English) on the ball.

The Cancha — The game is played on a three-walled court about 176 ft. long, 50 ft. wide and 40 ft. high including foul areas. The back wall, called rebote, has the same dimensions. The side wall, called lateral, measures 176 by 40 ft. A clear screen protects the spectators. To withstand the tremendous force of the rock-hard ball, the frontis is made of huge granite blocks and the walls and floor are made of gunite, which is a pressure applied cement. The court is divided into 15 numbered areas and the space between numbers 4 and 7 is called the serving zone.

The Point System — The number of points needed to win is shown on a large scoreboard. Second and third places go to teams with the next highest point totals, and in the case of ties, there is a playoff.

To assist you in wagering, the Bridgeport Fronton has what they call “Telewager Messengers.” They wear yellow uniforms and provide you with the same type of personal service as a waiter or waitress. They take your daily double, quiniela and perfecta wagers, give you a receipt and phone your wager to a special bank of sellers, who issue your tickets on a pari-mutuel machine. (Pari-mutual merely means “mutual wager” in French). After the game, the messenger pays your winning receipt at your seat. Note: Be sure to remember your messenger because only the one who takes your wager can cash your winning receipt.

Some of the most popular shots in a Jai-Alai game are rebote, returning the ball from the back wall with the forehand or backhand; chula – the ball hits the lower angle between the base of the back wall and the floor, coming out without a bounce; chic chac – a ball returned to the floor near the back wall, then to the back wall and back to the floor; cortada – when a ball is thrown from the outside of the court with the forehand, hits low on the front wall, then on the floor; dos paredes – a ball that hits the side wall, the front wall, the court, then goes into the spectator screen; bote pronto – a ball that is picked up underhand by the player after a short bounce; dejada – a short lob that hits the front wall just above the foul line and drops with a small bounce; bote corrido – the ball is thrown overhand with a great snap of the wrist after the first high bounce; and arrimada – a ball that is returned as close to the side wall as possible, hindering the opposition’s return.

The Basques (natives of Northern Spain) called the game pelota, a name which is still used in the rest of Spain. It is a game that was so closely associated with gala festive events that it became known as Jai-Alai, which means merry festival in the Basque language. Actually, Jai-Alai evolved from a good old-fashioned sport called handball, which came into existence in the 17th century. After the introduction of rubber for ball making, which created the first “lively” ball, athletes in the Basque provinces changed to one wall handball so it would be faster and more exciting to watch. Jai-Alai was introduced to the United States during the 1904 World’s Fair in St. Louis. It became popular in Chicago, where betting on it was legal. Then came the days of prohibition and it was goodbye Jai-Alai. The game resurfaced in Miami in 1924 and in 1933 pari-mutuel betting began. An important year for professional Jai-Alai in the United States was 1976 because new frontons were opened in Bridgeport, Hartford and in Newport, Rhode Island. The Bridgeport fronton cost 16 million dollars to build and has a seating capacity of 12,000. The average daily attendance exceeds 9,000 and the mutual receipts often reach $700,000 an evening.

Equipment – Cesta is the wicker basket used by the players it is tailor-made to each player’s specifications, with front court men using smaller cestas than the back court men . The frame of the cesta is made of steam-bent chestnut with form-shaping ribs planed down to one-sixteenth of an inch thick and an inch wide. The reed (imported from the Pyrenees Mountains) is woven over; the frame and ribs. The player’s hand is inserted into a leather glove sewn to the outside of the cesta and a long tape is wound around the glove to prevent the hand from coming out.

Pelota is the ball; it is about three quarters the size of a baseball, much harder than a golf ball and travels at speeds exceeding 150 mph, which could kill a player if struck. It is constructed of hand wound, virgin De Para rubber from Brazil, and has a layer of nylon thread and two coats of specially hardened goatskin. Each ball costs about $90. The player’s helmets are made of reinforced hard plastic with a foam rubber lining. Their uniforms consist of white, rubber-soled shoes, white trousers, a colored sash and T-Shirts of different colors, depending on the player’s post position in the game. The number on the front of the shirt also denotes the post position while the number on the back is the player’s number. Shirt colors are standard and remain the same in accord with post position. For example, red for post position one, blue for post position two, and white for post position three.

The Bridgeport Jai-Alai season started in November and continues until April 30. There are games six nights a week, Monday through Saturday, with matinées on Monday, Wednesday and Saturday. Game time is 7 p.m. Monday through Friday; 7 p.m. on Saturday; noon matinées. There are parking and dining facilities. Pick your day to visit the Bridgeport Fronton, and you’ll never forget the experience. Jai-Alai is the world’s fastest sport!