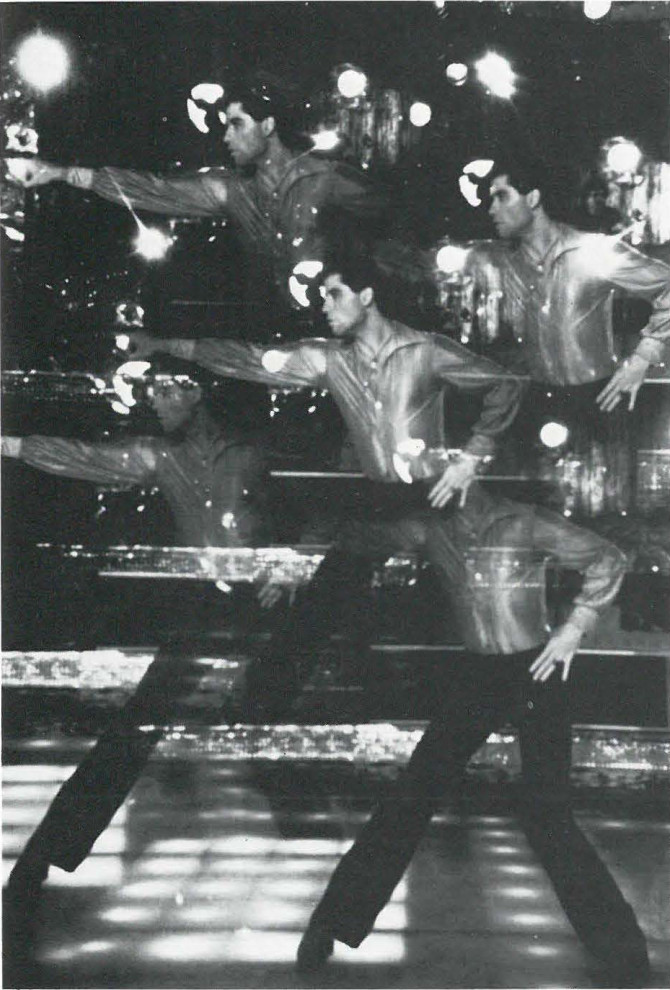 Saturday Night Fever opens with John Travolta soul strutting across the screen to the Bee Gees’ Staying Alive and it quickly becomes evident that he was predestined for stardom. Travolta has the role down pat.

His importance to what very easily could have been just another white exploitation flick is immeasurable. He portrays the slick, hip disco stud as if the role was custom tailored for him. Can you imagine anyone else besides Brando as Godfather or Stallone as Rocky? Well, Travolta is Tony Manero. He should be. He’s been rehearsing the part for the last two years as TV’s Vinnie Barberino.

Tony is an unfettered Barberino, released from the limitations of television and projected on the big screen as the man of the seventies, while Barberino is a vacuous punk child of the fifties. Young, amoral and sleek, Tony is a face in the crowd, Mr. Saturday Night, the King of the Disco teens.

Fever is a dance film not unlike the Astaire cinematic fantasies of the thirties. Instead of Rio, our hero is the pride of Brooklyn. Travolta doesn’t dance in white tie and tails, but his gabardine slacks and body shirts are just as elegant as he Tango-Hustles across the floor. He is fascinating to watch as he proves why he is number one — a dancing dervish so good he even has his own groupies.

“Tony, you don’t know how I love to watch you dance,” one of the local disco queens tells him, wiping his brow at the same time.

Still, with all of these blessings, Tony finds himself wondering if, at 19, there is anything else to life besides slaving on a nine-to-five six days a week job just to let it all blow on Saturday night. And to make matters worse, he can’t get the girl he really wants.

Karen Gorney portrays Stephanie, a nouveau Manhattanite who realizes there is something else besides discomania. But she also is a strobe-light junkie who returns regularly to Brooklyn for the Terpsichorean fixes provided by the Trammps and Kool and the Gang. Gorney is excellent as the pseudo sophisticate trying to alter her provincial facade into a more cosmopolitan one. Her performance provides ballast for Travolta’s bravado as she tries to explain the other world that exists outside the dance floor.

The dancing is anchored by other equally solid performances from the other faces: Bobby C, Gus, Joey and Double J. Portrayed by Joseph Cali, Barry Miller, Bruce Ornstein and Paul Pape, it is for them the crowd parts. “The Moses effect,” Tony’s brother, the Reverend Frank, Jr. calls it on visiting the disco with them. Martin Shakar plays an ex-priest with just the right touch of self-doubt and inquisitive zeal. He also gives Tony an insight to something else other than the Fever, even though he doesn’t know what it is himself.

The entire cast accurately reflects Italo-American youth caught up in an era of lower expectations and heightened paranoia as they compete with other minority groups on the street as well as on the dance floor. Lost in a world that ignores them, their inbred racism clashes with their acculturation as they imitate colloquialisms of those they supposedly hate.

John Badham (Bingo Long Traveling All-Stars) has directed a film that combines social reveling as adapted by Norman Wexler (Joe Serpico, Mandingo) with a trendy story line, which, despite its clichés, manages to be entertaining. The innovative dance sequences, as staged and choreographed by Lester Wilson, who puts Lola Falana’s act together, are so enjoyable to watch you might find yourself dancing in your seat to the Bee Gees score, helped by Kool, Tavares, the Trammps, M. F. S. B., Ralph McDonald, Walter Murphy, K.C. & the Sunshine Band, the Disco Duck-Rick Dees along with additional material by David Shire.

Robert Stigwood (Jesus Christ Superstar & Tommy) not only produces movies but also owns a major recording operation. It was Stigwood who engineered the Bee Gees reincarnated as blue-eyed disco crooners. He is a man whose eye for trends is legendary and with Fever, Stigwood is right on the money. His RSO Records was built on the disco sound, a sound that was kept alive by Blacks, Latins and gays while rock and roll wallowed in post-Beatle pap. Fever’s success will surely guarantee that the soundtrack, which is a dance masterpiece, sells platinum. Big bucks for everyone!

The tension-management effect and release brought about by Saturday night dancing has always been part of the Black experience. Listen to the O’Jays‘ Living for the Weekend.

If imitation is the sincerest form of flattery, then Blacks should be indeed flattered when they see Saturday Night Fever.