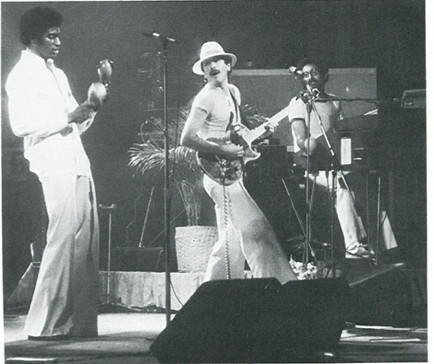 It’s unbelievable. The SRO crowd in New York City’s Palladium Theater is on its feet demanding a third encore. Throughout the theater, matches flare in a moving tribute to this outstanding musician. The crowd can’t get enough of him. He returns.

When it is finally over, Carlos Santana, the guitar virtuoso who introduced electricity to Latin music, Afro-Latin percussion to white rock and, along with the late Jimi Hendrix, lead guitar to rhythm & blues, stands center-stage, absorbing it all. The crowd loves him. Make no mistake, Carlos Santana is back.

At that February 10th concert, Carlos Santana, accompanied by the latest Santana band, performed an excellent blend of his pre-spiritual and post-spiritual tunes. The obvious omission of all the material written and recorded during the period in which he released five spiritually inspired albums (beginning with Caravanserai [1972] and apparently ending with Borboletta [1974] may signify the beginning of a new era for this talented guitarist.

His most recent release, Moonflower, already has been certified gold, approaching platinum.

Having set a new precedent, Santana kept on moving and in 1970 released his classic three-million seller, Abraxas. The personnel were the same as on the first LP but the music was slightly different. The group had acquired a name and a decent following, and Santana ventured further into the world of Latin jazz. With tunes like his own Incident At Neshabur (co-written by Latin pianist Alberto Gianquinto) and Tito Puente’s Oye Como Va, Santana was setting a pace that few groups could match. Unfortunately, Santana had difficulty maintaining the pace himself.

Rumors ran wild and by the time his third album was released in 1971, it was a well established fact that his entire group, including Santana, was on drugs. But the drugs did not stop him from further exploration of latin-jazz, and he began working with more Latin musicians. In addition to the regular group (Neal Schon, presently with Journey, had been added as a second guitarist) Santana used the best of the West Coast Latin session men (Coke Escovedo, Luis Gasca, Rico Reyes and Mario Ochoa) to help embellish his recordings.

As the group’s musical direction expanded, so did their widespread use of drugs. A pitiful album entitled Carlos Santana & Buddy Miles Live! was released in early 1972. Santana’s trademark, Afro-Latin rhythms, were missing and the album lacked cohesiveness. It did nothing for Santana’s reputation and, as it turned out, the album was a pivotal point in his career. Shortly after its release, Carlos Santana became a devoted follower of Sri Chinmoy, the East Indian Spiritual Advisor.

Dissension arose over Santana’s attempts to get the band members to adopt his new lifestyle. And after the band’s inevitable break-up, Carlos Santana went into hibernation and did not emerge until late in 1972.

He then jolted the music world with the latin-jazz rhythms of Caravanserai. Personnel changes on every track made it impossible to tell who was in Santana’s new band, but the album was a hit with the critics and received honors for best Latin-Rock-Jazz Album of 1972.

In 1973, Santanas re-emergence on the concert scene reflected his new-found religious beliefs; he dressed in all-white clothes, his hair was closely cropped and he wore a button with the face of Sri Chinmoy tacked to his sweater. Very often he would sit placidly at center-stage and play blissful melodies on acoustic guitar.

It was during this period that he teamed up with guitar wizard Mahavishnu John McLaughlin (founder of the Mahavishnu Orchestra). Together they recorded Love Devotion Surrender. The album received critical acclaim but it turned the record buyers off. Many Santana fans were aware of his changing life-style but they couldn’t adjust to his new musical directions. A subsequent album, Illuminations, with Alice Coltrane, also did his popularity more harm than good.

By the time Santana’s superb Welcome was released in 1973, sales had dropped considerably. Santana’s use of jazz artists on this album (Leon Thomas, Joe Farrell, Flora Purim) openly revealed the direction in which he wanted his music to go. Unfortunately, Santana’s stateside popularity had decreased so much that even when he compromised his music on highly rhythmic Borboletta he still couldn’t reach his old rock and latin fans. Although Borboletta was hailed as one of the finest latin-jazz albums every recorded, it had become painfully obvious that the public was interested in the old Santana sound.

Santana spent most of 1975 touring Europe, where his popularity was growing as rapidly as it was fading in the States, but he realized that he had to regain his fans back home. So in 1976, he released the bubbling Amigos LP. The album sold well and Santana took advantage of the upturn. Last year he scored twice with Festival and Moonflower, his current shot buster.

Stanley Clarke, bassist with Chick Corea’s group, Return to Forever, explained why Santana’s recent releases have been better received than his spiritual efforts. Clarke played on several of the Borboletta tracks.

“What happened with Carlos,” he began, was that when he came out he was playing a particular way. Then he changed and got into a spiritual thing.

“Carlos’ music is his new records and his old records. That’s Carlos! His other stuff was a conglomeration of the Mahavishnu Orchestra, Return to Forever and John Coltrane. He was trying to play like John Coltrane instead of just playing like Carlos.

“Like that spiritual stuff he was doing. . . I got a little kick out of it every time I’d hear a melody that reminded me of John Coltrane . . . or something Spanish that would remind me of Return to Forever. And when he recorded with Alice Coltrane, I thought that as nice — a nice tribute to Coltraneology.

“But the thing that drew me to Carlos was Abraxas. That’s what I liked. That album I played on with Carlos, Borboletta, some of it I liked, some of it I didn’t.

“When I was listening to Carlos’ spiritual records, he was mainly influenced by McLaughlin and he sounded like he was trying to play like him. But he didn’t have the ability to play it like him because he has a different kind of technique. So it sounded like he was trying to do something. I got a kick out of it. I get a kick out of anyone who tries to do something. But the thing that’s valid is when a person does something, not tries. It’s like saying, ‘I play this way and here it is’.”

That is essentially what Santana said on Moonflower and at his recent Palladium concert: “When Carlos Santana plays like Carlos Santana he is truly an incomparable talent.”