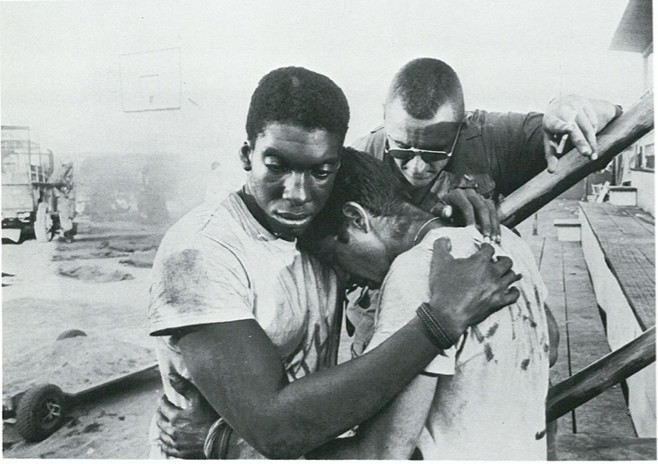 War films as entertainment is a contradictory concept; however, The Boys in Company C, the first in a wave of Vietnamese war films, fits the bill. It is a film that would have been considered just another action flick twenty years ago and ten years ago, enemy propaganda. It is because of this dichotomy that the film is being dissected, analyzed and criticized — not only as a picture but as a social phenomenon. The movie wasn’t made to hold up against such captious scrutiny — it was made to entertain.

The film realistically depicts youths thrust into combat. We follow five Marines, the lowest of the low . . .  the grunt from boot camp to the murderous Tet offensive. Too dumb, too poor or just too damn patriotic to evade the horrors of that surrealistic war, the five all are portrayed in a stereotypical manner that is the trademark of the genre: the fast talking Italian, the country boy, the hippie and the budding writer, all led, for a change, by a Black.

Stan Shaw as the super spade squad leader gives a stand-up-and-cheer performance that is sensitive to the frustration felt by many who fought that war. James Whitmore, Jr., who is reminiscent of a young George C. Scott, plays an officer who backs up his men. Also, outstanding in a film packed with solid performances are the other “Boys”: Andrew Stevens, James Canning, Michael Lembeck and Craig Wesson.

War is hell and the best thing any film concerning this particular conflict can do is convey that feeling to its viewers. And that is where the film falls short. By trying to combine the humorous qualities of M.A.S.H. with the pacifist line of All Quiet on the Western Front, the film cops out. The director, Sidney J. Furie (Lady Sings the Blues), uses points of reference that are unrecognizable to anyone who wasn’t there: M-16s jamming on sandy beaches, “smack” dealing by Vietnamese “allies,” the conflict between “lifers” and draftees, the fragging incidents, the body-count mania and the futility of fighting an invisible enemy. These overwhelm the uninitiated with vignettes of war placed into perspective by one character in the film who says, “Who would believe it?”

After two and half hours, the audience is shell shocked, but it’s all true, just ask anyone who was there; and if they bother to tell you anything, it probably would be that a lot was left out. Where is the 1,000-yard stare? The heat strokes from fighting in 120-degree heat? The utter exhaustion of sleepless nights and terror-filled days?

Go see The Boys in Company C, not only for Shaw’s performance, but also for an understanding of why “The Boys” who are now home, perhaps working right next to you, are still trying to catch up in a world that looks upon them as slightly demented because of their experiences in a place far, far away, an eternity ago. Garland served his last year of six in Military Intelligence as a Vietnamese interrogator and Operations/Intelligence in a Psychological Operations Company.