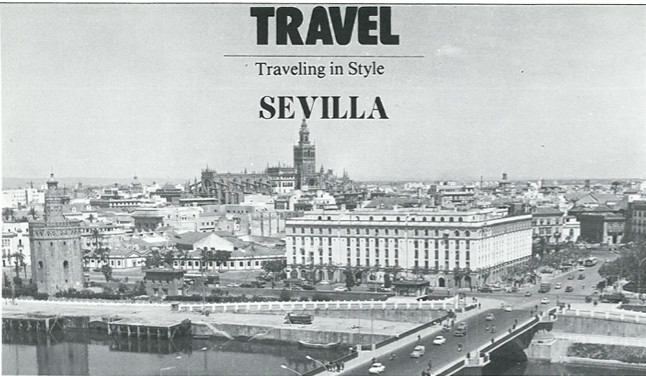 “March comes in like a lion and goes out like a lamb” — or, so they say. But whether roaring or bleating, March is the perfect month for travel. It’s the last chance for a winter getaway before spring returns to remind you how much you love your hometown.

A perfect place for a getaway is Spain, and the ideal city in Spain is Seville [Sevilla to the Spaniards]. Seville is one of the major cities of Andalucia, the southern part of Spain, where the spring comes early.

Seville, the mere name of the city conjures up all kinds of images. Here are Carmen and her cigarreras (the factory still stands, only now it is a part of the University of Seville). Here is the Torre de Oro on the Guadalquivir. Here, too, is the Barrio de Santa Cruz with its winding streets and its whitewashed, flower-hung houses. Here is the Alcazar and the Cathedral with its Patio de los Narranjos and the Giralda — a former Moslem minaret that was converted into the Cathedral’s bell tower. It has become a symbol of Seville.

Seville is the part of Spain that offers to the traveler an infinite panorama of colors, sounds and spectacles. From Palm Sunday to Easter Sunday, Seville celebrates Holy Week, an awesome display of the power of the Roman Catholic religion in Spain. Every afternoon and evening, Seville’s Coredias and Hermandades [religious fraternities] come out from their churches and parade religious images through the streets of Seville. The sight is particularly awesome to Black Americans because the costumes worn by the penitents are similar to those of the Klu Klux Klan. [The Klan got their idea for costumes from the Spanish Inquisition.] However, these penitents are not always dressed in white; they wear brilliant blues and reds, burgundies and greens, and they march through the streets carrying candles. Those who have made special vows march barefooted or carry heavy wooden crosses. For many nights the air in Seville is heavy with the smell of candle wax and incense and rings with the sounds of dirges and saetas [religious flamenco songs].

Then, on the Tuesday following Easter Sunday, Seville changes from the introspective piety of Holy Week to the exuberant gaiety of Feria, which is a celebration of all things Spanish. At this time, Spain comes vividly to life. There are beautiful senoritas with flashing dark eyes, handsome hermanos riding exquisite horses. All wear the traditional Andalusian dress, the costumes acquainted with flamenco shows. But here they are in their natural habitat. You see the flamenco that is not served for tourist consumption.

While one part of Feria is a carnival, another part is the Casitas — small houses set up in the park offering flamenco, sherry and friendship. Some casitas are owned by the rich and in them the friendship is limited to those known by the families, but there also are club-owned and public casitas where professional flamenco dancers perform. Refreshments are inexpensive. In any event, watching the traffic from the private casitas is free and that’s a good show by itself.

Whether you go for Holy Week or Feria, remember one of the first rules of travel: Travel on the airline of the country. The airline of Spain is Iberia. When you board, you’ll already have begun your trip; relax and enjoy a glass of fino, Spain’s bone dry sherry.

Spain is not a difficult country for the traveler; every effort is made to ensure your comfort. The hotels are graded by a star system and a stay at a four-star hotel should cost about $30 a night, frequently less. In many cases, two or three meals can be added to the daily room rate for a moderate supplement. [It’s called full or demi pension.]

But sample the food in Seville’s many restaurants. Some Spanish dishes you should look for are gazpacho andaluz [a cold soup that’s much like a liquid salad] and paella [Spain’s national dish]. And go into one of the typical Spanish bars, where you stand ankle-deep in debris [paper, shrimp shells] and eat some of the most delicious and inexpensive food in the country. The bars are easy to recognize — look for the debris — and the food is called tapas. Each bar will have its specialties. Wash it down with red wine, sherry, or beer [Cruzcampo and Aquila are the local brands and good!] The cost will be so little you will be astounded. You might find that you’ll often make a meal out of just tapas.

Holy week and Feria in Seville are events that have not only captured the attention of Spain but the whole world. Early reservations are a must. You can get more information from the Spanish National Tourist Office, 665 Fifth Ave., New York City, 10022 or call your local travel agent. If you go, you’re sure to come back agreeing with Frederico Garcia Lorca — Viva Sevilla!