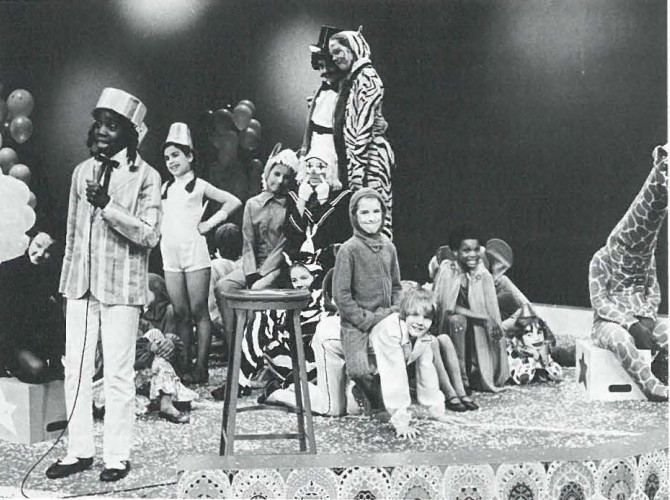 The Bubble Gum Players is the resident company of the Billie Holiday Theatre for Little Folk. This is the newest of the three groups formed, in April of 1977.

Program Coordinator/Director Toni Brabham speaks with pride of the Bubble Gum Players (BGP), and rightfully so. She has witnessed a transformation in many of the players who joined the company with no knowledge of the theatre and poor reading averages. They now read above level and have begun to appreciate a new art form.

The BGP is the first educational/theatrical company to come to Brooklyn. And Toni, a warm and dedicated individual, uses the theatre, whose credits include a six-week course in reading. They read and clip all kinds of dance and theatre reviews; they use the dictionary for unfamiliar words and construct sentences with them. The students are dealing with a subject that interests them so there is no reluctance to do this homework. Through choreography they learn osteopathy, with questions like how many bones are in the feet? Through sports they understand body coordination. They use all sorts of reading materials — Action Magazine, Children’s Express, Amsterdam News, Sports Illustrated. The methodology works. And the audience reaps the benefits; the performers are self-confident and that confidence is projected on the stage. The youngsters give good theatrical performances.

The Bubble Gum Players’ first play was the BedStuy Story, which played for five consecutive weeks to sold out audiences — youngsters from 3 to 15 years old. It takes talent bordering on magic to make a captive audience of that age group. When the 150 talented boys and girls are not performing, they are in study workshops. Toni says there is no problem getting students. In fact, there is a waiting list for girls, but boys ages 12 to 18 are needed. Monthly dues are $4 and workshops are given three days a week and on Saturdays and Sundays, 10 am to 7 pm The next Bubble Gum Players’ performance will be in June.

The Theatre, which began in the fall of 1969, is the brainchild of director Meridee Stein. “The primary purpose of The First All Children’s Theatre is to produce professional quality theatre. I strongly believe that a company or repertory setting is best for the development of that theatre. Only in a company can the full range of artistic talents — acting, singing, dancing, writing, composing, directing, designing — which go into theatrical production be shared and nurtured.

“What has been called Children’s Theatre has too long been the effort of well-meaning amateurs or frustrated, second-rank professionals. The time has come when theatre for children must take its place as a legitimate genre for professional artists.”

These words give a strong insight into Meridee Stein and the reason for the success of the Theatre, whose credits include a six-week engagement by both companies at Joseph Papp’s New York Shakespeare Festival in spring, 1975, a WABC-TV half-hour special of the Meri Mini Players and appearances on the Today Show and AM New York. Both companies performed at Mayor Koch’s inauguration.

Education comes first. If company members fail in school, they are suspended from the company until grades improve. There is no shortage of applicants; children see the show and come in to audition.

The First All Children’s Theatre performs every weekend. Discount tickets are available for some organizations.

The Harlem Children’s Theatre Company has been lauded for very good reason. Since its formation in 1971, it has contributed significantly to legitimizing children’s theatre.

Aduke Aremu spearheads this company as both executive director and playwright. She doesn’t approach the problem of theatrical illiteracy, she attacks it with a passion. Well-versed and well-traveled, [the company’s concept derived from experiences and observations from her west and east African visits] Aduke makes children universal by teaching them techniques of dance and theatre from all over the world. Her staff is diverse, selected for its ability to give the company multi perspectives. By exposing youngsters to views that are not strictly Afro-American, they are better able to see themselves in relationship to the world.

Aduke firmly believes in the importance of a formal education. She feels people in the arts should give themselves the added cushion of alternate means of support while performing and perfecting their skills. “Starving artists don’t create well.”

The training at Harlem Children’s Theatre is viewed as therapy, a way to eliminate self-hatred and aggression. “We lose so many of our children in their youth because we fail to provide them with enough rich cultural experiences. Artistic expression makes you more sensitive, more perceptive, more loving, and eventually more stable and mature.”

What has this philosophy meant to the children of The Harlem Children’s Theatre? It has meant performances at Lincoln Center, the Brooklyn Academy of Music, Town Hall, Billie Holiday Theatre for Little Folk, National Black Theatre and Pratt Institute.

The Liberation of Mother Goose was produced by Joseph Papp at the New York Shakespeare Festival and Douglas Turner Ward at the Negro Ensemble Company in 1975. It was also aired on Channel 13 (WNET), Black Journal, January 1977, the H. C. T. C. was invited to perform at the Second International Black Arts Festival (FESTAC) in Nigeria. There they performed for artists from all parts of the world. In July, the company goes to Europe.

Aduke also gets her students through auditions; after seeing performances youngsters want to audition. Workshops are on Saturdays and rehearsals on Thursdays and Fridays. The fee is $10 a month and covers training in drama, music, dance and technical theatre.