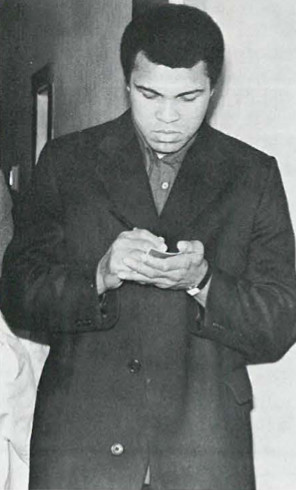 The Greatest. By Muhammad Ali with Richard Durham. Random House, $10.95

The defeat Muhammad Ali suffered when he lost his World Heavyweight title to Leon Spinks does not negate or even tarnish his image as the “Greatest.” His autobiography substantiates the self-analysis he has given the public. What is more, it goes behind the facade and gives you a complete picture of the man. The book is, as the subtitle reads, his “own story.” As you read the events chronicled, you realize that the man, Muhammad Ali, is even bigger than the part he has played. There are countless incidents to testify to this.

This message comes while Ali was hospitalized after a momentary defeat. He decides that it will be his inspiration for future victories.

His comments about some of his opponents: To Floyd Patterson, he said, “You were good. You had guts and heart. You were greater than those egging you on.” About George Foreman he said, “But I take nothing away from George. He can still beat any man in the world. Except me.” All of Ali’s roles outside the ring and the way he has played them add to this stature. Witness his embracing the Islamic religion and the way he handled his life afterwards.

As you read this book, you will understand why Muhammad Ali is the most popular man in the world. Perhaps this man who may have turned you off bragging about his boxing prowess and other attributes, will win you over with his strengths as a human.

If you are not impressed with the book, you still might want a copy for its valuable statistical data. It can serve as a reference tool, giving a listing of some of the most important events in Muhammad Ali’s life, from his birth in December 1942 to the birth of his son in 1972. It gives you a thorough Professional Fight Record from 1960 through 1975. Pick up a copy. You’ll have an honest opinion of Muhammad Ali.

A teenage girl takes God as her confidant and shares her problems with Him. Every area of stress, doubt or confusion, whether pertaining to parents, boys, school, drugs or what have you, she takes to God and raps with Him.

We have ten short stories written by such well-known authors as James Baldwin and Ernest Hemingway. They point out young people’s search for self-esteem, identity and understanding.

Highly emotional and personal poetry written by the teen-age students of Griselda Greanes. It also contains works by outstanding poets.