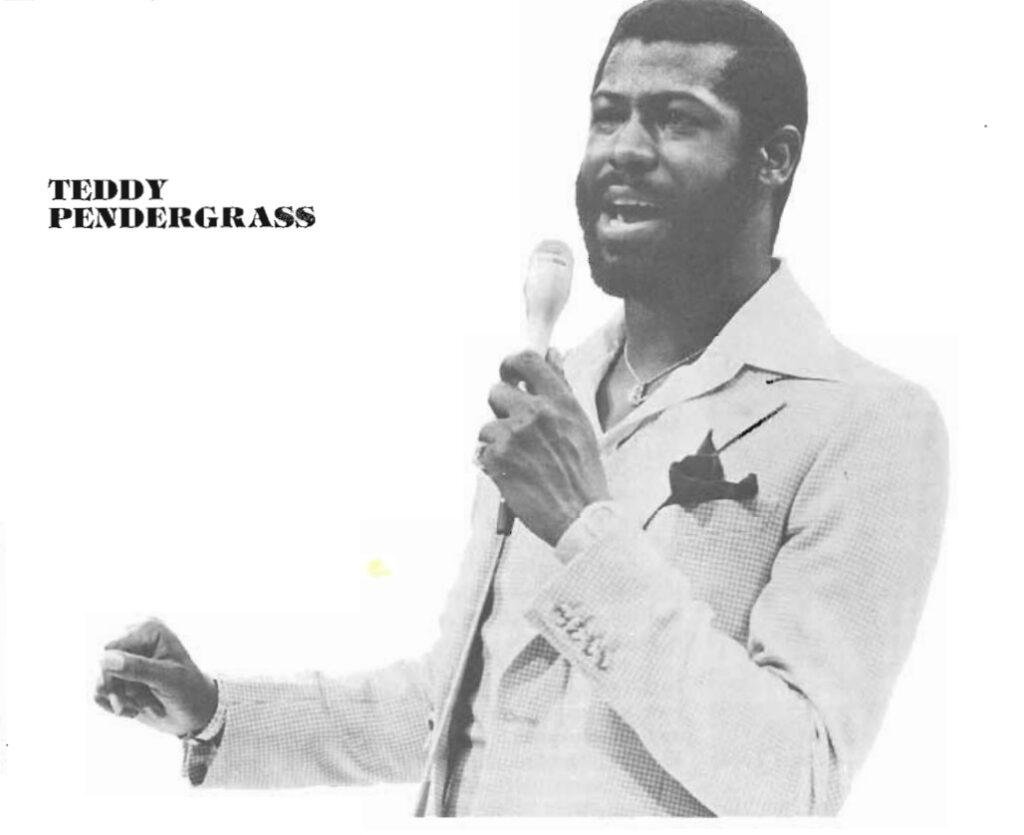 Teddy Pendergrass, the fantastic singer who affectionately calls himself “Tender Pender” and “The Teddy Bear,” has a voice that can make listeners quiver. That voice has also earned him enough money to make him one of Philadelphia’s more comfortable citizens.

The temperature was in the mid 1980s and the solidly built Pendergrass leaned over the terrace of his lavish Philadelphia apartment observing the heavy traffic twenty-five stories below. Smoking a cigarette and stroking his full beard, Pendergrass reflected on his accelerating career.

His second solo album, Life is a Song Worth Singing, is an exciting blend of ballads, pop and disco tunes. According to Pendergrass, “It was the first album ever to ship gold out of P.I.R. [Philadelphia International Records]. It should reach platinum quickly and easily.” Pendergrass has other reasons to be excited. He recently bought the Philadelphia mansion of a former Pennsylvania governor and he’s put together a new stage show that is guaranteed to blow both your mind and your feet.

Despite the mansion, the fabulous apartment and blossoming career, Pendergrass tries to remain unscathed by the unexpected success. “I felt like wearing this outfit today,” he explained to further prove the point, “because I get so tired of the entire humdrum suit and tie atmosphere. After all, I like to hang loose too, you know.”

He wore beige suede sneakers. Laughter came easily as the jovial 28-year-old singer talked about his days as a fledging drummer-vocalist with the Cadillacs and Harold Melvin & The Bluenotes and his current status as a soul-singing superstar sex-symbol.

ROUTES: What kind of name is Pendergrass?

Teddy: I don’t even know. From what I hear, I think it’s English. I don’t know because I’ve never traced my roots (laughter).

Teddy: I like to have fun. But I change frequently from fun to business. Sometimes I mix the two but I let people know that when it’s business, it’s business. Even if it’s done with a laugh or a smile it’s still business.

ROUTES: Do you still practice in the ministry?

Teddy: I would say so through some of the songs I sing. And believe me, my belief in God has had a very positive effect on my career. That’s what has carried me this far, you dig! I couldn’t do it by myself.

ROUTES: Do you find any contradiction between your religious image and your sex-symbol image?

Teddy: No, because I don’t think people confuse the two. You can have a strong belief without opening a church or anything like that. I’m not into that. Besides, I’ve analyzed it and I think that makes a person even more sexy, you know, when they have a firm belief. I don’t want to throw the church into it, but the way Jesus Christ did things was very sexy. He knew what he was doing. Yeah man, he had it.

ROUTES: For our readers who don’t already know, can you tell us how you got where you are today?

Teddy: Nope! I’ve tried to do that but maybe it’s best that I don’t. ‘Cause sometimes if you try to go back and trace .. . I mean, like you always have it in the back of your head, you know, what you’ve gone through. But to try and map it all out man, whew, I’m afraid to even try. I mean, it happened and there must be a reason for it. Who am I to question His logic? Besides man, right now I’m thinking in front of me — not behind. Maybe when I’m 55 years old — if God allows me to be that old — I’ll sit back and do it. That gives me exactly 22 years to enjoy (laughter). ROUTES: Did you need to sing with a group to psyche yourself up for a solo career?

ROUTES: Would you consider singing with a group again?

Teddy: Nope! Not now, anyway. Maybe if in the future something happens to my solo career I might put a group together then. I’d get exactly what everybody wants to see and play around with it as necessary. When I first left Harold Melvin I was gonna put a group together. Harry Ray, lead singer with the Moments, was gonna sing with me. I was gonna put together a group of good-looking guys that can sing. I was ready to do it but then changed my mind to find out what it would be like as a solo act.

ROUTES: There’s a part of you that seems to like singing message songs. Why is that?

Teddy: Anything I sing about is real and it only becomes a message if the people listening don’t already know about it. I don’t sing about anything unforeseeable. I just think it’s nice to keep giving people something to think about at whatever tempo it happens to be at. Besides, what I’m singing about is different. Everybody’s singing about dance. Everybody’s coming up with new lyrics to say dance. When I sing songs I like to look out for the interest of the consumer. For example, you might like a particular record for its beat but you can’t go your whole life dancing. That gets you nothing. No money, no nothing. So I’ll give you something to think about ’cause you can’t dance 24 hours a day! Some records I’ll put in a dance tempo but they’re still telling you something. And you can’t beat it ’cause that’s a winning combination.

ROUTES: How do you react to the new wave disco-gospel?

Teddy: My first mind tells me to say I don’t like it. ‘Cause I think it’s a form of blasphemy … It’s a misrepresentation of the word of God. I come from a Southern church, Holiness Baptist, where we danced to spiritual music but it was a spiritual dance. But I’ll be damned if somebody’s gonna do the “freakydeaky” while I’m trying to tell them about Jesus Christ. My first mind tells me to stay away from it. No, I don’t like it. Al Green’s into it now and he’s a friend of mine. I love him madly but I definitely don’t think he’s found the answer. I know sometimes it’s through desperation of trying to change your sound a little bit, but oh no man, don’t mess with that Man up there. Leave His music out of the discos. You know the kind of things people do off records in discos. I’ve walked into discos and seen people laying on the couch just doing their thing to the music, you dig! To the rhythm! Although the word of God can stimulate you, I feel that’s stepping beyond the line. Evidently other people see it the same way because I don’t see it nowhere on the charts. I mean, believe me, I’m not against Al. I just think he should back up, wait a minute and think about what he’s doing. I’d hate to say it’s a copout ’cause the brother’s been too good to me and we’ve been friends too long for me to bad mouth him. But this is professional criticism and I’m sure he can understand that. I wouldn’t say it can’t catch on. It might catch on, but how long do you think it would be before the Reverend Ikes and Jesse Jacksons start to come down on you. And if the music crosses over you’ll have Oral Roberts to contend with. They might not really care but sooner or later somebody’s gonna ask them about it and they’re gonna make a statement. And when you’ve got all that pressure on top of you … whew, that’s a little too strong for me. I wouldn’t want to mess with that situation.

ROUTES: You have a Bible here on your coffee table …

Teddy: Yeah, and that’s another thing that annoys me. People come in here and they don’t even see it. They’ll take their briefcase and set it down on the Bible. Now I know it’s just a book but, just on my upbringing, you can set your briefcase somewhere else than on the Bible. Do you see what I’m saying? Maybe it’s me, I don’t know. It just doesn’t seem right to me.

ROUTES: How has your superstar status affected your social life?

Teddy: Whew, I ain’t gonna lie to you. In a word, it’s rough sometimes. You know, I love the business and I know getting all this attention goes along with it but the public … They just don’t understand that you need your own time. I can understand people getting excited when they see a celebrity but there are ways of saying hello to somebody without hassling them. I can see going up to someone and telling them you like the way they sing, paint, dance or whatever it is they do that turns you on. But I’ve been stopped when I’ve been scurrying down the street to make an important meeting. People would actually want to stop me for an autograph. I don’t mind signing autographs but it would seem to me that out of courtesy and common sense people would leave me alone if it’s obvious that I’m rushing to get somewhere. And then they get mad if you tell them you can’t stop to sign for them. “I buy all your records,” they tell me. Great! I love you for it but buying my records does not give you the privilege of invading my privacy. It can really be a hassle.

ROUTES: If you had to stop singing what would you want to do?

ROUTES: One day a movie will be made entitled The Teddy Pendergrass Story. What will it be about?

Teddy: Whew! (Laughter.) It would be an insane movie. It would be like an abstract painting. I would probably be the only person who could understand the movie and I wouldn’t be to sure myself. I’ll tell you one thing before you split, my man; we’d have to change the title.