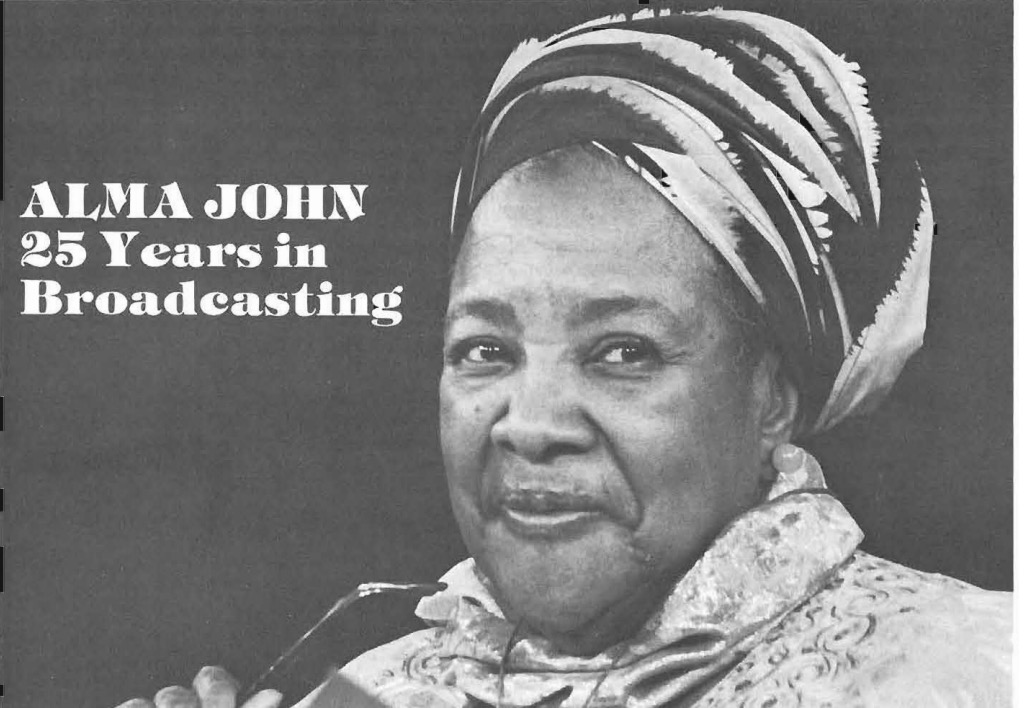 To know her is to love her. Alma John, the grand lady of broadcasting is celebrating her silver anniversary in communications. Her face lights up with the warm, lovely smile familiar to so many as she says softly, “My life goes back so far. I’ve been blessed with good years, many good years.”

Indeed, Alma John has had many “good years.”

A native Philadelphian and eldest of nine children reared by a proud, determined, widowed father, Mrs. John is a long-time friend of Marion Anderson. Both were members of Union Baptist Church, which raised a thousand dollars through cake bakes, fish fries and other activities to finance singing lessons for Ms. Anderson; and Mrs. John reminisces about the day she stood on street corners selling tickets for fifteen cents to Ms. Anderson’s church-sponsored concert.

This marked the beginning of her career of service to others. After many hard years of walking miles to school and working after school in a variety of domestic and menial jobs to help support her large family, Mrs. John came to New York to live with an aunt and to study nursing. She graduated from New York University and the Harlem Hospital School of Nursing and worked at Harlem Hospital for ten years, until she was dismissed from her job for attempting to organize the workers around a demand for better working conditions and higher wages.

She went on to organize the second accredited school for nurses in New York State at the Harlem YWCA, becoming the first Black woman director of a practical nursing school in the state. For six years she worked there, teaching a total of 298 female and male nurses.

“And the irony of it,” she says with a chuckle, “is I went around and got opportunities for their clinical experiences at the same Department of Hospitals that had fired me.”

Later, in serving as executive director for the National Association of Colored Graduate Nurses, she traveled throughout the country in search of educational and employment opportunities for Blacks. She recalls that while traveling, she would jot down ideas that she wanted to hear discussed on radio and television and would often visit newspaper offices and television and radio stations in various cities, studying their operations. She’d also inquire about the possibility of presenting a program on the Black nurse and her problems and progress. In the late forties NBC granted her a half-hour time slot to do a program on the Black nurse entitle ‘‘Brown Women In White.” The program was well-received and quite successful, and was aired over 69 stations. It marked the beginning of Mrs. John’s immense popularity with all sectors of the American public.

She progressed, adding to her accomplishments 25 years of broadcasting work on radio station WWRL’s, “Black Pride,” a biweekly television program she hosts and produced for two years, and the Alma John Workshop, Inc., with a program geared toward improved public health, education and community involvement. She was married for nearly three decades to the late C. Lisley John.

Mrs. John has always been quite vociferous about her great love, pride and desire to serve Black people. ‘‘I always like to say,” she asserts the majority of Black people are God-fearing, hard working and upstanding citizens. And there isn’t anything wrong with the other five percent that more love, more understanding and more opportunity wouldn’t help. My credo is: If you know, teach. If you don’t know, learn. Each one, reach one. Each one, teach one.

“Communication, cooperation and coordination are important. We invented communications with the drum in Africa, so therefore, long before Westinghouse or Marconi or any of those people were thought of, we were communicating over hundreds of miles, just being in touch. But stresses and strains have sort of affected the kind of life that was ours in the mother country,’’ she says, mentioning that she is quite excited about a forthcoming trip to Africa this summer.

“Cooperation is something else we have to get on top of, zero in on, because in unity there is strength,’’ she emphasizes. “And we must come together. There is no time for rugged individualism. We must also coordinate our activities. Time and energy can be better used when it is done collectively… I’m so concerned about the many functions we support—the dances, the debutante balls, the cotillions, all the expenditures of money for hotels downtown, out of our communities. This has got to stop somewhere because the more we take out of our communities, the poorer they become. So don’t ask me, ‘Where can we go, Sister John?’ Members of the World Community of Islam brought together 10,000 Black families at the Armory at 142nd Street and 5th Avenue, which is supported through our taxes. And then on Randall’s Island they’ve had two highly successful Black Family Days and attracted forty to sixty-thousand people. We have Vincent’s Place here in the community, and if that’s not large enough, maybe you should declare a moratorium on your event for the year and give some incentive awards to our children who can’t go to school because they don’t have shoes or clothing to wear.

“When I look back over my career, I think of the time I started, when most people would decide “What’s the use?” I kept on adding to my learning. I advocate that my people study and that they do things together and that the extended family idea be revived.

As Professor Haley (Alex Haley, author of Roots ) tells us, we must talk to the elders, and we must be concerned about their treasures.

“We must understand that we can do anything that we want to do, if we want to do it badly enough,” Mrs. John continues. “I tell the children, particularly when I go into the schools, that any people who could build the pyramids and sphinx in the middle of the Sahara Desert in Africa can do anything.

“I just want us to be more concerned with our family life and with the children. We must tell our children that they are God’s chosen people and that they must love their bodies so much that they will not do anything to despoil them.And they must love each other, and love themselves. I declared a revolution of Love a long time ago.”

Mrs. John’s revolution of love apparently has been a victorious one, for her apartment is filled with numerous trophies and plaques presented to her by various organizations during her many years of public service. Among the honors bestowed upon her are the McCall’s Magazine Golden Microphone Award, as well as the Mary McLeod Bethune Award presented to her by the African-American Historical Society.

She delights in telling the amusing story of when she was three years old and was sent on aSunday school stage to recite a poem an aunt had taught her. Stricken with bewilderment and fright, she burst into tears and ran from the stage. Her aunt gave her a firm look and said in an even firmer voice, “You go right backup there and say that poem.” “I went back up there and said the poem,” laughs Mrs. John, “and I’ve told my friends that they haven’t been able to knock me off the stage since then!”

How fortunate that she could not be ‘‘knocked off the stage,” fortunate for the millions of young people she has loved and guided; fortunate for the many, many people of all ages whom she has inspired and served during her long career in the public eye. Alma Vessells John, a living, breathing, modern-day pioneer, servant to God, and as can be attested to by millions, a most willing and gracious servant to mankind.