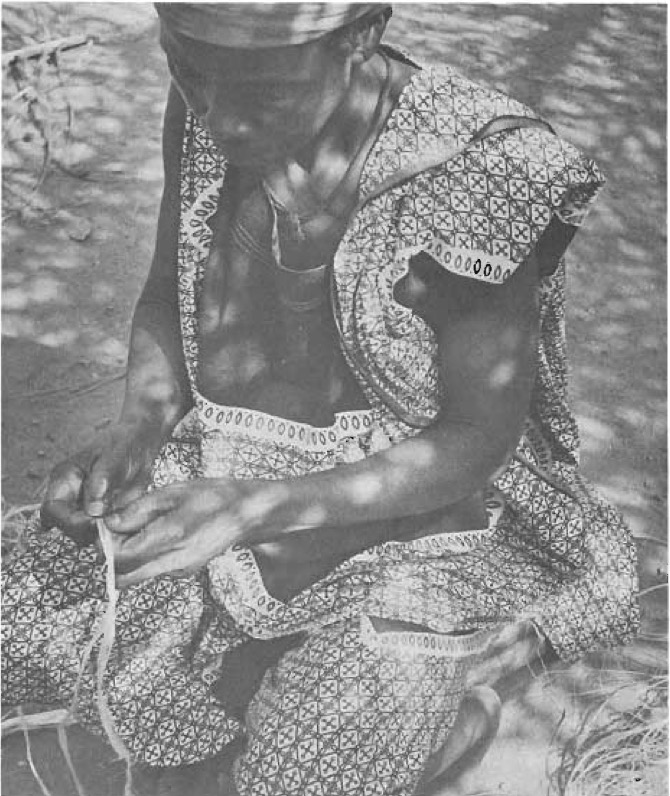 What do an elegant basket table, a fowl coop, a fetish basket, a bustle, a dung-covered beehive, a tooth brush, a fishnet, and a green palm-pith truck have in common?

Each is made in Africa from plant fibers and each is among the 138 objects shown in the African Grass and Fiber Arts exhibition currently at the African-American Institute, 833 UN Plaza, New York City.

“Africa,” says writer-weaver Sandra Newman in her introduction for the show’s catalog, ‘‘is city and country, nation and people, but the land still dominates. The natural materials flourish—they are the wild topmost layer of the earth.’” The diversity of what Africans do and have done with the fibers these plants provide is highlighted by this exhibition. By extension, it also demonstrates the diversity that is Africa: land that is desert, grassy savanna, bush, forest, swamp, river, mountain; people who are hunter-gatherers, nomadic pastoralists, agriculturalists, city dwellers, Each particular combination of geography and way of life determines what people need, what they have around them to make it from, and how they make it. This show, then, ‘‘is a microcosm of the world itself.”

The objects come from thirteen African countries, notably Botswana, Burundi, Ethiopia, Rwanda, Sierra Leone and Zaire. Some of the objects are old. A Baluba mask made of fiber, raffia, rattan and other materials; an Azande shield made of reed and wood, and several grass and raffia hats collected in Zaire during the first part of this century are on loan from the American Museum of Natural History. Other objects have been crafted more recently Particularly fine are several coiled and wrapped baskets, sold by the National Museum of Rwanda on the condition that they be exhibited in the United States, and a number of superb baskets, trays and containers from Ethiopia and Somalia. Several pieces won prizes at agricultural shows in the areas of Sierra Leone where they were made. Some items, particularly a basket chair from Sierra Leone, mark the adaptation of old techniques to new designs and products. Continuity and change, too, are a part of the show and of Africa.

The range of objects is very large: clothing—hats, belts, and a woman’s buttocks cover; objects for personal use—combs, fans, a penholder, a tooth brush; implements for fishing, hunting and farming—shields, a sling shot, a quiver and arrows, fishnets and fish traps, a palm-tree climber; household utensils—brooms, tables, chairs, sleeping mats, a beehive, baskets, trays and containers of every type, even some musical ritual instruments and a toy; objects—masks and baskets.

Equally diverse are the fibers that have been used to make these objects: bark, bamboo, corncob, grass, leaves, palm, raffia, rattan, reed, straw and vines. Many objects are composed of several materials, including such additions as beads, brass, clay, dung, feathers, fur, gourd, leather, mud, pith, seeds, skin and wood.

The various techniques for working fiber are represented: braiding, coiling, twining, weaving and wrapping. A few objects also are decorated with appliqué and embroidery. The natural color of fibers is enriched by dyes in some cases.

The coiled baskets of Burundi and Rwanda are a contrast of black and white which ‘‘creates a sense of delicacy and airiness.”’ The same technique applied in Kenya to a beer container, produces a S’solid, useful quality.’’ The designs of baskets from Botswana vary but ‘‘each is a recognizable form and is known by a particular name, e.g. ‘‘Knee of the Tortoise’? or ‘‘Flight of the Swallow.”

The objects on exhibition are used in many areas of daily life and are all an important part of domestic life. The fishnet, mbembei in Mende, figures in many aspects of life. It is a part of social reciprocity: a portion of the catch is shared by the fisherwoman with the woman who made the net and with the family which owns the swamp. ‘‘Before it is used for the first time a mbembei (net) is soaked in water with special herbs for ‘medicine,’ sawei, to bless it so that it may always be full of fish, and more importantly, to ward off evil spirits who would harm women fishing. A dark spot in the stream or swamp, a queer stone by its edge or the deep spot at the stream’s bend, any of these places might harbor a demon. A net can catch a snake as well as a fish.’’ It is fitting then, that in the exhibition, the fishnet and broom hang between ‘‘common’’ and ritually used items.

While a show can display only objects, these objects represent the people who make and use them. In various parts of Africa, the skills needed to work fibers belong to different people. Some of the items are made by men, others by women. A woman’s skill in one place may be a man’s in another. Some are made by specialists who do little else. Most, however, are made by people whose primary occupation is ‘‘farmer’’. Gbunu of Jaiahun, Sierra Leone, is preparing the kowei fiber which she twists into string against her thigh and then ‘‘weaves’’ into a fishnet. Lahai Shanko, age 12, from Kabala, Sierra Leone, shows off the green palm-pith ‘‘Poda Poda’’ (truck) which he has just completed. It is stuck together with cane ‘‘pins’’ and has tires which he cut from a discarded rubber flip-flop he picked up by the side of the road.

“Sculpture” the catalog essay concludes ‘‘has a place in the European mind as fine art. Basketry has not. Yet to many Africans, a carving is no greater than a woven fetish, a fishnet or a bride-price basket. Life is a continual circle of needs. And the cycle of weaving a good basket is an assurance that man has worked to make something good. All the objects in this exhibition have lived in association with someone. They mean much more than ‘basket’.’’

The curator for African Grass and Fiber Arts, Jacqueline Springwater, designed the exhibition. She is an author and lecturer on African and contemporary American crafts and a consultant on exhibition design who has also lived in Africa for 10 years.

The African Grass and Fiber Arts Exhibition will open to the public without charge through Saturday, October 7. The hours are 9 to 5 weekdays and 11 to 5 Saturdays. It is closed Sundays and Monday, September 4 (Labor Day). Arrangements can be made for guided tours. The African-American Institute is located at 833 United Nations Plaza. Its art exhibition program is supported in part by a grant of public funds from the New York State Council on the Arts.