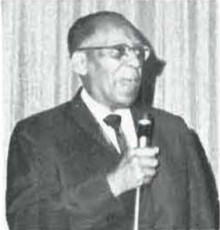 The proliferating celebration of Eubie Blake in recent years is an ironic twist to the theatrical fate of Nobel Sissle. From the moment, in 1915, when Sissle and Blake formed their gentlemen’s agreement partnership, Sissle assumed professional and social superiority. Because of Blake’s respect for his partner’s two years at Depauw and Butler Universities, he freely accorded him these assumptions. However, the emergence of Blake as a ragtime phenomenon, before Sissle’s death in 1975, left Sissle feeling neglected, increasingly bitter and less able to accept what he viewed as abandonment. That he was becoming increasingly senile after several small strokes vitiated the last attempts to include him in public appearances, particularly on television.

The last five years of Sissle’s life were traumatic ones which began in 1970 with the issuance of 86 Years with Eubie Blake on the Columbia label. Although it included a vocal medley by the then 81 year-old Sissle composer, the absence of his name on the album cover jolted him emotionally and psychologically.

Fortunately, when one examines Sissle’s multiple careers — the military, vaudeville, musical comedy, orchestral — and his contributions to public service, one is able to blend respect with compassionate comprehension.

Sissle was born in Indianapolis, Indiana, on July 10, 1899. His paternal line had begun with his Kentucky grandfather and the slave owning Cecil family. After freedom, the grandfather changed his name to Sissle, unknowingly creating a singular stage name for which his grandson was ever grateful. Once, when Sissle and his orchestra were playing for whites in Kentucky, a man, who had stared at him from the foot of the stage until intermission, came to his side and whispered, Why don’t you spell your name right?

Sissle’s military career was marked by his association with James Reese Europe of Clef Club fame. In New York, Europe had led the 1st New York National Guard Company, which went to Paris as part of the 369th Infantry Regiment. In both places Sissle was the drum major. Discharged as a lieutenant in 1919, Sissle remained with Europe as friend and music librarian when the 369th Hell Fighters Band returned to the states and immediately began to tour. However, Sissle’s military affiliation ended shortly thereafter when Europe was accidentally killed by a specialty drummer in his dressing room in a Boston theatre.

The managerial expertise which Sissle acquired during his association with Jim Europe was reflected in his teamwork with Eubie Blake in vaudeville. He was the unquestioned leader and must, therefore, be given substantial credit for the team’s appearance as a class act in tuxedos. This was not always easy. A New York agent, for instance, wanted them to appear as roustabouts in blackface who discover a piano in a packing crate — they refused. Sissle and Blake were smash hits wherever they appeared and the team made a valuable contribution to the development of film when filmmaker Lee Deforest used part of their vaudeville act in his early experiment with the synthesis of film and sound. The film is now a collector’s item, and has been shown on television.

When Sissle and Blake moved to Broadway with Shuffle Along in 1921, their act was incorporated in the Miller and Lyles script as A Few Moments with Sissle and Blake. Although a great deal is now known about this show, much less is known about its many ramifications. Many of the performers hired for it went on to become international stars. A roster of them includes Adelaide Hall, Ulysses S. Thompson and his wife, Florence Mills, Caterina Jarboro and Josephine Baker. It was with a well developed sense of pride that Sissle boasted about his contributions to these and other careers. The infectious entertainment quality in Shuffle Along led audiences to demand more of it, as reflected in the darkening of Broadway, the spread of nightclubs and increased employment opportunities. Employment opportunities not only increased for performers but for non-performers such as wardrobe mistresses, costumers, choreographers, set designers, and stage hands — even the waiters in nightclubs were peripheral beneficiaries of Shuffle Along.

After the close of Chocolate Dandies, Sissle and Blake’s second Broadway comedy [1924], they went to London and onto further success. For a variety of reasons, Blake wanted to return home, while Sissle wanted to stay. Each had his way.

It was during Sissle’s extended stay that he met Cole Porter. Porter had written a show for which Fred Waring and His Pennsylvanians were to provide the music. Waring, however, wished to make a Hollywood film. Porter’s solution was to urge Sissle to form an orchestra, his first. Although Sissle sang and played a mandolin — some say he held it — he was not a trained musician and felt rather reluctant about playing but, not for long. He not only worked with Porter, but he toured extensively with his own group. When his orchestra appeared at Monte Carlo’s Cafe de Paris in 1929, it was the first American one to do so.

Later, in New York, the orchestra achieved popularity through CBS broadcasts from selected night spots. The high point of Sissle’s broadcasting orchestral career was reached, undoubtedly, when his orchestra became the house-band for the second time at Billy Rose’s Diamond Horseshoe from 1946 until it closed five years later. In a 1949 letter to F. E. Miller, Sissle wrote, “My security is not the Billy Rose Horseshoe”…so it’s Shuffle Along in 1950 or Bust. Bust, it did.

In latter years, Sissle began to form mental images of the ways in which he wanted posterity to perceive him. He wanted negative details deleted, saying, white folks don’t need to know those things about us. He began to emphasize such things as his work with USO Camp Shows, the Warwick School for Boys, the YMCA, the church and various service oriented organizations. Sissle was also a founder of the still existing Negro Actors Guild, an over fifty year member of Alpha Phi Alpha, and a member of ASCAP. At his father’s funeral, Noble, Jr. attributed to his father the humility that a great man should have for other people. With or without such humility, Noble Sissle’s final wish was to be remembered not so much for his contributions to the theatre but for his contributions to his people.