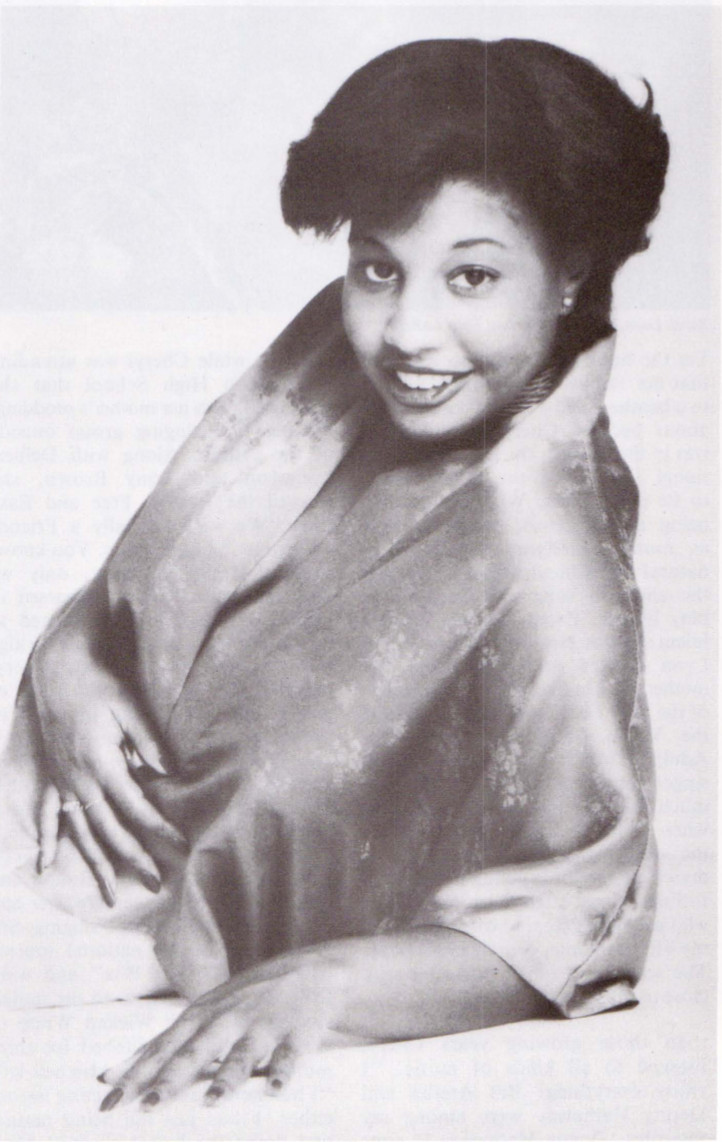 Cheryl Lynn‘s eyes shine brightly she caresses a conversation. They shut tightly when she reaches deep down in her soul and sings it out with the glorious fire-chills that God and true emotion have kindled. “I believe that you should put God first in your life and all good things will be added to you. I was blessed. God could have given this opportunity to anyone, but He chose me as His instrument. I know that He has something that He wants me to do and through my singing I can express love because it is the ultimate high of my music,” And, if Cheryl Lynn sounds too real it is because she is, the Piscean powerhouse with the four and one-half octave vocal range is an independent woman who is full of life and serious in her determination to succeed,

Cheryl’s warmth eases you instantly, Her smile is natural but a hint of shyness appears just beyond it. That hint is evident, “I am so happy that I don’t know what to do! I feel like it’s happening to someone else not to me. My record went gold in the second week of the new year.” The gold she is referring to is, of course, Got To Be Real the single release from her debut album Cheryl Lynn.

“But I am determined to keep abreast of things and not give in because everything is going $0 well, I am serious about my music and my singing career, Certainly, I have ideas to explore like writing, producing, even arranging, but it will be up to me to learn more about myself as well.”

Cheryl Lynn was born, raised and schooled in Los Angeles. She was already a singer when she was “discovered” on the Gong Show mid 1976, and her heart-chilling rendition of  You Are So Beautiful not only won her first place, but led to her subsequent recording contract with Columbia Records.

But a little more than two years ago, singing professionally was the last thing in Cheryl’s mind. “I wanted to be an independent woman, which is why I decided to major in speech pathology at the University of Southern California. Actually, I had won trophies in speech tournaments and for expository debates and I felt comfortable in that atmosphere. I felt I wanted to be a woman with a career, one who wouldn’t have to depend on anyone. You know, to be able to do my own thing. And when the right man comes along I would be a help mate and go from there. So, singing was just a hobby for me.”

Yet, the hobby she referred to was one that her family — her mother, father, two brothers and a sister — knew more about because Cheryl’s foundation was in the church, the non-denominational church of the living God, to be more exact. With her mother being a minister of music as well as musical director, it was quite natural that Cheryl would be leading the choir in song and learning to play by ear. Except for the natural talent she possesses in singing, Cheryl Learned everything from her mother. At age 5, she was a member of the Tiny Tots, from there she joined the Youth Choir and the Young Adults Choir. The bright, young singer sought no more. “I was very much into my family and home life when I was growing up. I wasn’t the outgoing type. In fact, I saw myself as a gullible young lady whose feelings were often hurt by people who just didn’t seem to care. Basically, my life was home, church and school. The security at home made me stay close to my family.”

In those growing years, Cheryl listened to all kinds of music. “I enjoyed everything! But Aretha and Donny Hathaway were among my favorites. Donny Hathaway is gone now, and I am sorry about this, but he and Aretha have/had the spirit. They reached into their inner selves and sang — grabbed at your insides. When they reached inside you, you really felt them.”

It was while Cheryl was attending Washington High School that she auditioned, with her mother’s prodding, for her first singing group outside of the church, Along with Delbert Langston and Tony Brown, she formed the Happy, Free and Easy Trio. “We were basically a Friends of Distinction type group. You know, straight, pretty harmony, only we sang a cappella.”’

They rehearsed in Delbert’s garage and performed at talent shows. And then the bridge was formed and crossed, Cheryl realized that speaking in front of people and performing in front of people was what she enjoyed most. Speech pathology was one-half of |i; singing and performing was the other half. “I decided that I wanted a total communication thing with people.” So in the early part of 1976, Cheryl gave up her educational studies and dedicated herself one hundred per cent to her God-given talent—singing.

She auditioned for the national touring company of “The Wiz” and went from being a pit singer to the under: study role of the Wicked Witch of the West and then subbed for three months when star Ella Mitchell left. “Thad never taken any acting lessons either, I was just me being natural and doing the best I could!” More important, Cheryl felt she was finally branching out when she joined “The Wiz,”

Prodded again! Only this time it was Delbert Langston—he had arranged her Gong Show audition. To Cheryl it came as a surprise and at first she refused, But after some coaxing by Delbert she did the show, and it aired after that year. Suddenly, Cheryl! Lynn, the woman from the calms of California, the singer whose father had said before his death in 1975, “You’ll make it, if you would only sing alone,”” was being referred to as “the all-time great” of over 4,000 acts that producer Chuck Barris had ever seen on the show.

All hell broke out immediately following Cheryl’s appearance: record companies, producers, management—they were all interested in the “unknown” singer. In between nightly performances, Cheryl, who was still witching in “The Wiz,” flew from San Francisco to Los Angeles to speak to everyone. Delbert Langston acted as a manager, and because Cheryl is a very spiritual person, it was through good vibes and an appreciation for his manner and personality that she chose producer Bob Johnston. He brought Cheryl to New York to meet Eric Kronfeld who is now her manager. Kronfeld played a ninety-second video cassette of her Gong Show appearance for CBS Records’ President Bruce Lundvall who signed her to the label immediately, Delbert Langston, her long-time singing associate, and the man who always reminded her that she had to “take singing more seriously to go far,’ became her co-manager.

Now, with the “gold” success of Got To Be Real, Cheryl is equally excited about performing. “Yes, I am looking forward to getting out in front of an audience because I believe in being a total performer. I am also looking forward to feeling the warmth because I know that I will be able to give it too.”

Cheryl Lynn has already taped her appearances for Soul Train and Midnight Special and returns to her new home, New York, to begin laying tracks for her second album. But even with the gold and the success and her career, Lynn prays that she won’t change and you hope/know that she’s right. “I’m going to be myself, show something good and positive. It’s all about love and caring and this is what I’ll implement!”