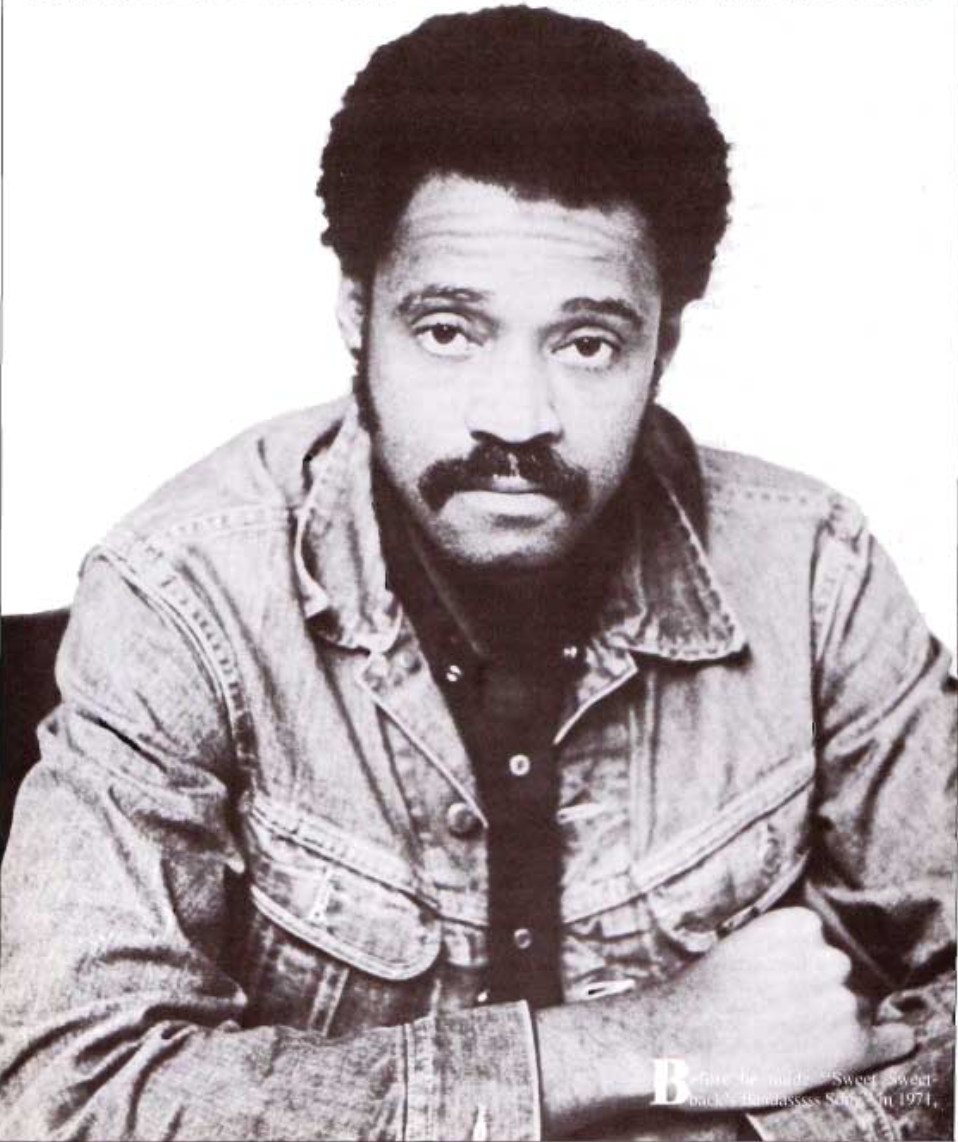 Melvin Van Peebles’ career as a film-maker had been notable for its continuing development. In the early 1960s he made two short films in America, Sunlight and Three Pickup Men for Herrick, but he failed to find steady work in Hollywood.

He moved to Paris where, through a quirk in French law, he was able to obtain a director’s card and $200,000 to make his first feature, The Story of the Three Day Pass (1968). That film, the tale of a black soldier’s brief affair with a French girl, was purchased for the San Francisco International Film Festival and first brought him attention in America. He later signed with Columbia Pictures to direct Watermelon Man (1970), the humorous story of a white businessman who wakes up one morning and finds he has turned black.

And then came Sweetback and the black man’s image in American films has never quite seemed the same. It ushered in a new film genre white critics labeled blaxploitation, and presented a more dominating and sexually assertive black male identity that both shocked and fascinated American audiences.

But since then his forays into film have been rare. Some wonder if  Van Peebles’ voice has been intentionally silenced. Van Peebles, however, doesn’t let any such conspiracy theory bother him. Sitting in the office of his production company, Yeah, Inc., his only comment is that up to now I have never been offered the kind of money a director with my proven track record would expect.

However, on his other film projects since Sweetback he speaks somewhat more freely. For example, he revealed that his highly praised Broadway play, Don’t Play Us Cheap, was adapted from a screen-play. He had even started production on the film version in 1973.

In 1977,  Third World Cinema, the production company behind Claudine approached Van Peebles with a project called Grease Lightning. It was the story of Wendell Scott, the first black to race in the South’s stock car circuit. He rewrote the original script for Third World enabling them to make a distribution deal with Warner Brothers.

With a cast that included Richard Pryor and Pam Grier, Van Peebles led the crew to Georgia for location shooting. However, creative differences arose between Van Peebles and Third World’s representative Hannah Weinstein. Apparently not a man to throw stones Van Peebles comments I have to do it my way or just pay me. If the brothers and sisters had stood firm they could not have done it. (A reference to Pryor and Grier?) I had a firm contract. But it happened.

So, several weeks into filming, Van Peebles left the film. Subsequently, Michael Schultz — Car Wash, Which Way Is Up? — came in to direct, another screenwriter came in, and Hannah Weinstein supervised the final edit. The result is a slow moving and confusing feature — a real disappointment. Schultz, because of Weinstein’s edit doesn’t consider Greased Lightning one of his films and tried, unsuccessfully, to have his name removed from the credits.

The only film-related topic that really stimulated Van Peebles to talk was Sweetback. About that film he had much to say, most of it quite interesting. He feels the major film companies “took the Sweetback formula, distorted it, and were able to use it on what later became known as ‘blaxploitation’ movies. When you can do that, there is no need for me. It is just good old American business. You can then subvert my formula for your own Machiavellian, counter-revolutionary design and make money off it without the originator. An originator whose ideas which are repugnant to you in the first place.’’ The differences between the Sweetback character and the protagonists that followed him are, to Van Peebles, quite basic. Sweetback is an outsider in the true sense. They took that hero and made those heroes work to some degree, within the framework of the establishment by means of a badge or the revenge motive. They were driven by some majority mainstream motivation.”

Looking back on the making of Sweetback Van Peebles recalls, I was able to complete it because nobody expected me to succeed. The whites that helped me did it for two reasons: one, to feel liberal; two, to have their racist theories vindicated by my failure. But I didn’t fail. I cheated them.

Which is undoubtedly the big reason he hasn’t been able to mount a production of what surely would be a moneymaker, Sweetback II. The script exists, says Van Peebles, but it’s been on ice since 1971. What is it about? Van Peebles would only say, the same old shit, only better.