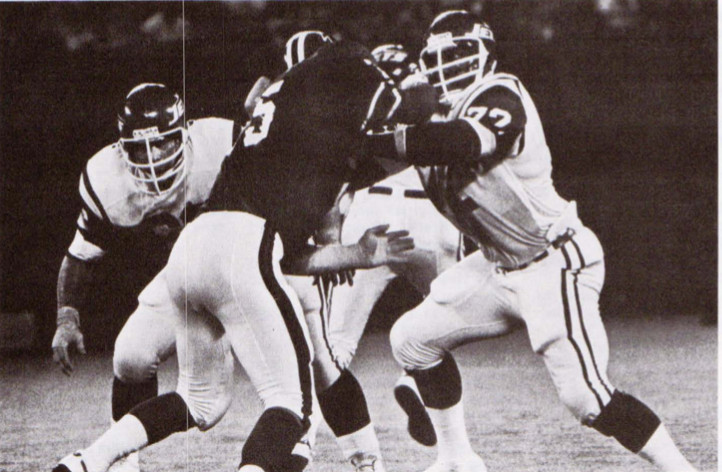 The National Football League teams, all headed by smooth talking rich businessmen, again this year, have turned their heads away from the black college football player. The draft was held in New York City, and for the first time in 8 years not one black college player was drafted in the first round, nor even in the second—but then one and only one player was drafted in the third round. Of the 16 players finally drafted, the fewest in 8 years, all but three were drafted after the fifth round.

How the N.F.L. teams could overlook a quarterback like Albert Chester of Florida A&M who led his team to a national N.C.A.A. Championship with a victory over the University of Massachusetts in 1978; boasted an undefeated 11-0 season in 1977; and a 8-2 season in 1976 — beating the likes of Jackson State, Tennessee State and Grambling State. You are not just an average quarterback when you lead your team over such powerhouses all back to back. The New York Giants said they wanted to draft the best college quarterback in the country with their first pick. They didn’t draft Albert Chester, the winningest quarterback in college football over the past three years! Instead, they drafted a white quarterback (Sims) of Morehead College in Kentucky who won only two games this season (78) and lost six, plus in his four years at Morehead, he never had a winning season. Yet the Giants picked him in the first round claiming that they didn’t even know a quarterback named Albert Chester.

In the Black College All Star Game, played in the Superdome Jan 7, 1979, there were 84 black college football seniors. The black scouts and the two white scouts told me at the game that about 80 percent of those players would be in the N.F.L. next season. Up ‘til the draft, one thought they meant that 80 percent of the seniors would be drafted — but only 16 were, why?

The N.F.L. owners know the black college seniors are going to come on as free agents and make the team. Some of them will start the new season but the owners will not pay them salaries commensurate with their worth, in fact, they will be paid the bare minimum. Some will sign for two or three years and make very little money. Then others will contract, some white agent who will negotiate a contract and take his money off the top. What will be left for the black college player? Nothing but frustration.

After his two or three years are up, probably he will be in so much debt that he’ll have to sign whatever contract the team offers him. Many a black college player is told by his coach to sign with some white lawyer or white agent, coach who already has been given a little money for his counsel — and the player is off on the wrong foot.

The black college athlete, like his white counterpart, should start seeking a good lawyer in his sophomore year. Not an agent — but a lawyer. Then when he reaches his senior year he stands a better chance of being drafted. The black athlete, especially the black college athlete should seek the services of a black lawyer who knows the pro ranks, and more importantly, the pro ranks should know and respect the lawyer if the athlete is to be drafted. (One of the most outstanding black lawyers who represent athletes is Judge Ed Bell of Detroit.) There are far too many black college coaches trying to do a lawyers job. It would be so simple, and so much better for the black college athlete, if coaches would stick to coaching and let lawyers negotiate players’ contracts.

It’s still a shame for the N.F.L. teams to pass over and not draft a single player from Florida A&M, the national champion with five seniors, and South Carolina State with six seniors, who won their conference title four of the past five years. None of them were drafted. Just to prove ROUTES’ point of view this month, take a look at the N.F.L. teams next year and see if you can’t find these players who were not drafted this year on some team: Ivan Seahorn, Central; Don Rose, Hampton State; Leroy Paul, T.S.U.: Don Doaty Mississippi Valley; South Carolina State’s group—Rufus Bess, Walter Sullivan, Bobby Moore and Arthur Prescott; Judge Thomas, Virginia Union; Micheal Madison, Alabama State. This year’s draft choices will only help the black college coaches to do a better job for many years to come. ii