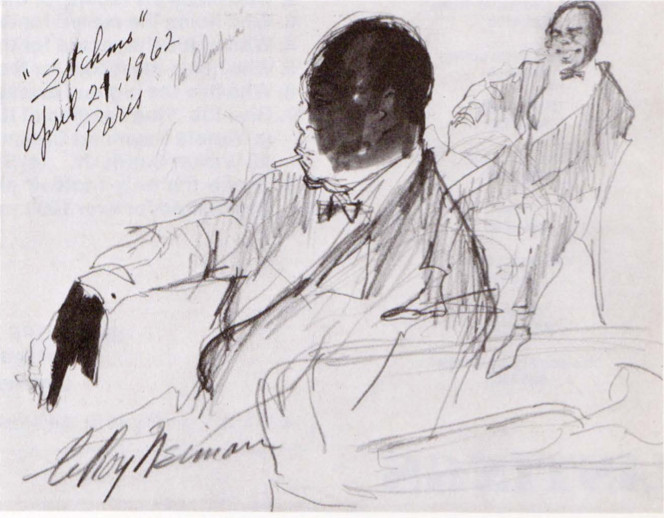 Each year the Newport Jazz Festival pays tribute to an artist whose career has greatly enhanced and advanced our appreciation of jazz. This year’s festival will salute Billie Holiday, on June 28th at Carnegie Hall, in a program entitled “We Remember Billie.” And for the past five years, the subject of the tribute has also been the subject of a commemorative portrait. This portrait, then, becomes the official poster of the Newport Jazz Festival.

On our cover is a composite of the commemorative posters of Duke Ellington, Charlie Parker, Louis Armstrong and this year’s poster Billie Holiday, as the bold and striking style suggests all were painted by Leroy Neiman. Neiman, best known for his paintings and drawings of famous athletes, has been the official on-camera artist at the Olympic Games, the Super Bowl and the World Series.

His drawings of sporting events on television, as they are happening, has made him a household name to millions of TV viewers. Leroy Neiman’s style is to create movement in action. Thus, when he draws or paints Reggie Jackson one can almost hear the swoosh of the bat, in a Muhammed Ali painting one can hear the snap of the jab. Of Muhammed Ali he says, We used to draw together before his big fights. Then Ali decided he was going to be an artist. He told me, I’ll top whatever you are doing. You’ll find out the kind of prices I can get.

Aside from being a sports enthusiast, Leroy Neiman is also a jazz fan. As a matter of fact, he started drawing jazz musicians before he became known as a sports artist. Most of the musicians he sketched did not pose, moreover Neiman’s presence was often unnoticed, says Neiman. I draw compulsively. Jazz players are in a world by themselves, at times, they seem oblivious to their surroundings. I drew Louis Armstrong at the Olympia in Paris in 1962, he seemed lonely, no, not lonely but reserved, a private person.

One day he is interviewed — paraded — lauded — applauded — he beams. Next time you see him he is alone, unnoticed, sad. Last night he was relegated to the locker room of the country club where he sat alone between a line of lockers in the far end of the room which was evidently reserved for the star. The other members of the group were gathered together in the front room—conversing but Louis had privacy, and he sat back in his exclusive corner alone with his horn.

Back in the 1950s early 1960s deep in the heart of the black community on the Southside of Chicago was a place called the Bee Hive. To be exact, it was a jazz joint. The house band for the night could always use another player. After much blowing and drinking, after the customers had left, the musicians would sit around and listen to each other play. It was more a teaching session than anything else, where everybody was a teacher and a student.