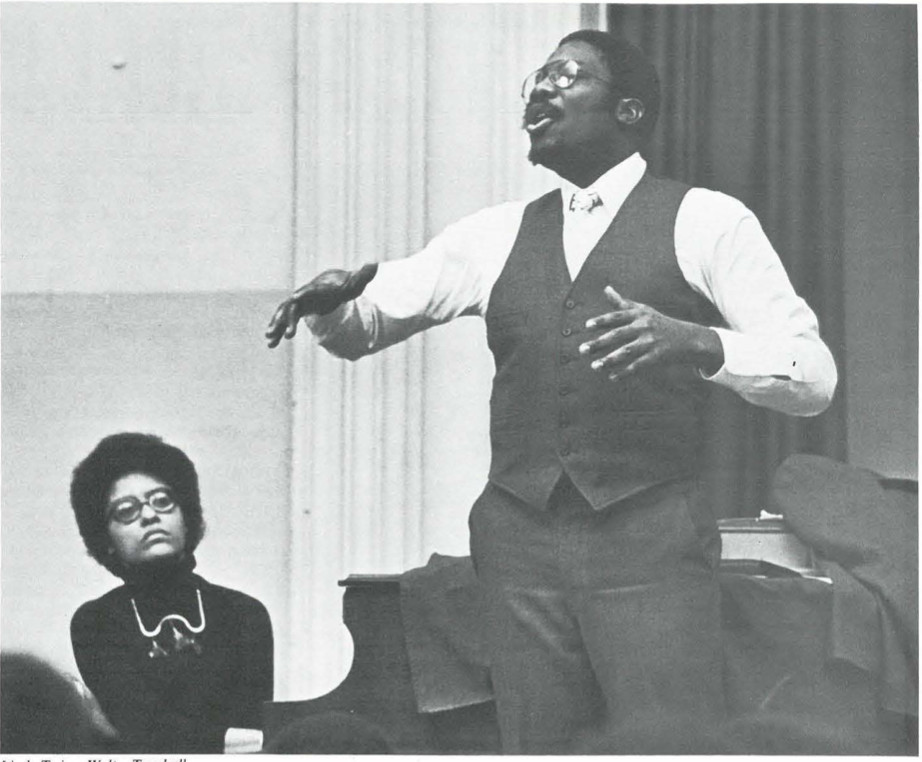 It was indeed a pleasure to witness the graceful and professional manner in which the Boys Choir of Harlem (BCH) took its place on an undersized stage at the Biltmore Hotel. The event, aptly entitled A Dramatic Change, betokened the organization’s first benefit. Although the talented youngsters instantly captivated their audience, it wasn’t until their emotion-packed rendition of We Are Heroes, with the chorus line’s reeling refrain of All black boys are born a hero, (sic) that the crowd’s appreciation exploded into thunderous applause.

Formerly known as the Ephesus Boys Choir, the Boys Choir of Harlem was originally sponsored [initiating in 1968] by the Ephesus Church. In the four short years since their incorporation, the boys have performed at numerous major cultural institutions, including New York City’s renowned Avery Fisher Hall. The youngsters, under the direction of Walter Turnbull, represent a most versatile and worthwhile musical group. “Our organization is designed to provide a creative outlet for these youngsters and to educate and broaden their aesthetic perceptions as well,” proudly stated Mr. Turnbull. In addition, it offers tutorial after-school classes to its members in-need, to help maintain or further their scholastic goals.

While members of the BCH come from all over New York City, for the most part they hail from central Harlem. The boys are introduced to a wide variety of music, ranging from a strictly classical repertoire to gospel and spirituals to contemporary melodies. Special emphasis is given to the works of Black composers. The performance of indigenous music is encouraged in the form of commissions to young black songwriters. BCH’s leaders believe that the heritage of the Negro (sic) spiritual and early American folk music plays a vital and necessary part in the educative growth of their members. However, popular music is given equal billing in the repertoire. The Boys Choir of Harlem seems to move effortlessly yet superbly from Bach to Mr. Bojangles.

Aside from duties common to all boys their age, such as attending school, maintaining a respectable average and helping their parents at home, these young men at BCH must attend choir practices three times weekly. More and more they are being booked for concerts, which, I imagine, must usurp additional rehearsal hours from their leisure time. Indeed, it takes a special kind of child to persevere as a member of the BCH, one who is both willing to work hard and determined to succeed.

Recognizing the recreational needs of the children, the organizers facilitate their participation in such sports as winter basketball, Ping-Pong and Summer Olympics. Incidentally, BCH’s team won the mini-Olympics in track last summer. Judging from some of the letters they have written home, the members of BCH’s live away at Trinity Parish Camp [West Cornwall, Connecticut] appear to be elated about their work and thrilled over their camp experience. Situated in Manhattan, The Boys Choir of Harlem Day Camp also offers choir members an enriching and fun-filled summer.

Born in Greenville, Mississippi, Walter Turnbull, BCH’s founder and director, is presently working toward his doctorate at the Manhattan School of Music. An opera singer by profession, he holds B.A. and M.A. degrees in Music, from Tougaloo College and Manhattan School of Music, respectively. Mr. Turnbull sang with the Philadelphia Orchestra and obtained operatic roles with both Lake George Opera and Opera/South.

Contributing, also, to the success of the BCH is their composer, accompanist and arranger, Linda Twine, We are Heroes being only one of her many compositions for the group. Born in Muskogee, Oklahoma, she received a Bachelor of Arts degree in Music from Oklahoma State University and a Master of Arts degree in Musical Education from the Manhattan School of Music. In addition to her work with the BCH, Ms. Twine is the accompanist for singers Novella Nelson and Lee Cooper.

Auditions for the BCH take place at various schools around the city. However, Mr. Turnbull stated that any interested boy between the ages of 9 and 15 should contact Ms. Farid at the BCH office (690-3333) and set up an appointment. Mr. Turnbull is also actively seeking adult volunteers, particularly males, who would help in organizing additional recreational activities for the present 80 members of the BCH. Volunteer tutors, as well as any other types of volunteers, would be most welcome. The organization’s less-than-optimal financial position would be improved if 20,000 readers sent a half-dollar each to the Boys Choir of Harlem and made this very positive force in Harlem $10,000 richer!