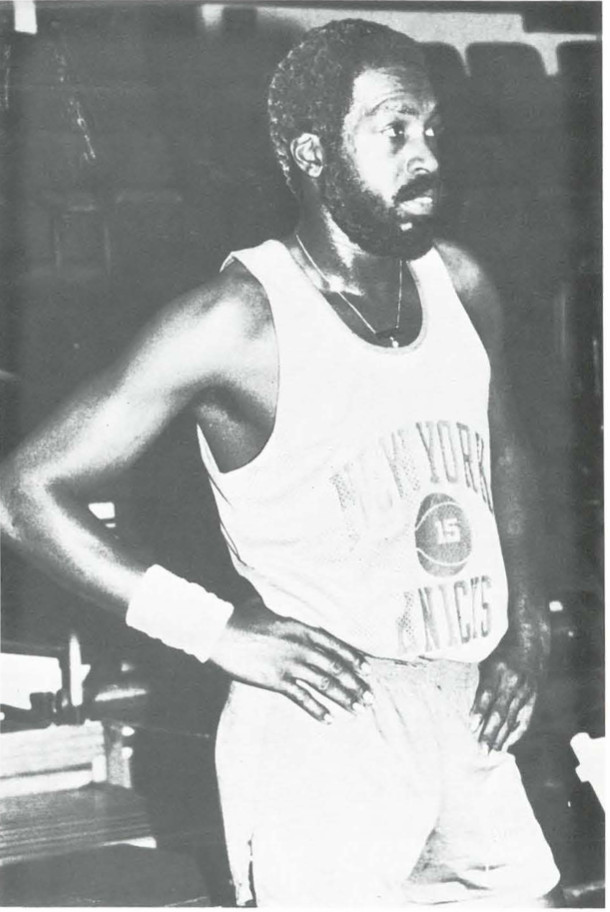 When the New York Knicks begin the upcoming 1979-80 basketball season, there is a possibility that Earl Monroe, the captain of the team and the man known for his lightning fast spin, will not be with the team.

“I want to play one more season”, said the 34-year-old guard, who as a member of the Baltimore Bullets, before being traded to the Knicks, engaged in some memorable shootouts against Knicks guard Walt Frazier.

During last year’s season, the new Knicks — Toby Knight, Glen Gondrezick, Mike Richardson and Ray Williams — had to struggle to keep leads and win ball games, something uncharacteristic of the old Knicks — Willis Reed, Bill Bradley, Dick Barnett and Dave DeBuscherre — who, with precision and strength, won NBA championships in 1970 and 1973.

Monroe, a holdout during training camp, sat quietly on the bench during almost the entire first half of the season, while first-year coach Willis Reed went with a total youth movement, starting in the back court with guards Richardson and Williams.

While Monroe sat, and as the capacity crowds, so much a part of the chemistry that made the old Knicks work, began to dwindle [when the season began, crowds were averaging about 15,000 per game, only 4,000 less than capacity], many Knick loyalists began to turn their attention away from the Knicks to the New Jersey Nets and their stars, Bernard King and John Williamson.

But not all of the Knick’s fans abandoned the team. “For younger fans,” remarked one seasoned Knick supporter, during halftime at a game between the Knicks and the Portland Trailblazers, “it might be a different story because for them the Nets have always been here, but we old-timers view the Nets as an upstart team.”

However, these upstart Nets were continually winning games and drawing in new fans. And while this was happening, and after having watched the team place its only other veteran guard, Butch Beard, on waivers, Monroe — his pride intact, his body motionless — sat on the bench. Coach Reed’s youth movement was under way, and Monroe, obviously, was not included.

It soon became apparent, however, that Reed’s strategy was not working; the team, with an offense revolving around center Marvin Webster [obtained from the Seattle Supersonics in exchange for Lonnie Shelton and cash] persistently hovered around the cellar of the division.

Coach Reed gave most of the back court playing time to the younger guards, who did not even vaguely resemble the one-time Rolls Royce back court combination of Monroe and Walt Frazier. Though the younger guards were able to run and score, they were unable to sustain tight leads or control the court. After an extended losing streak, Knick owner Sonny Werblin decided to make some changes. He replaced Reed with Red Holzman, who had orchestrated the 1970 and 1973 championships, but still there was no magic, no Earl Monroe in the back court to provide, if only for a few minutes, the balance that the younger guards so desperately needed.

While the Nets were becoming more and more of a threat to the Knicks with their play and attendance on the rise, Monroe, in his characteristically quiet manner, declined to comment to the press.

After taking over in mid-season, Coach Holzman began to use Monroe more and more. Overlooked for almost the entire first half of the season, Monroe finally entered the picture during the second half of a game with the Cleveland Cavaliers. Subsequently, in back-to-back games against the Nets, Monroe scored 22 and 28 points — quite a performance for a man considered too old to play ball. Monroe’s point production and back court control, which was to continue until the end of the season, was re-established. The magic had returned. With the flashy movements and nimble ball-handling that made him a perennial All-Star for more than 10 seasons, Monroe again began to bring Knick crowds to their feet.

Earl “The Pearl” Monroe — gray-haired, bearded and running with that awkward style of his — returned, with the pizzazz that characterized the old Knicks returning with him, After one game, Quinn Buckner, a young guard of the Milwaukee Bucks, remarked to a reporter “Earl just kept taking me down in the hole and teaching me some lessons.” Still, it was apparent to most basketball buffs that the spirit of the old Knicks would never return.

At the end of the season, “Earl Monroe Day” was held at the Garden, so that the fans and the team could show him publicly how much they appreciated him.

The fact remains, however, that the man, who can perform as dexterously with a basketball as Harry Houdini did inside a locked and chained box, just may not be back with the Knicks next season. That is something that Monroe will have to decide. And who knows, he just may return to perform his magic one more time.