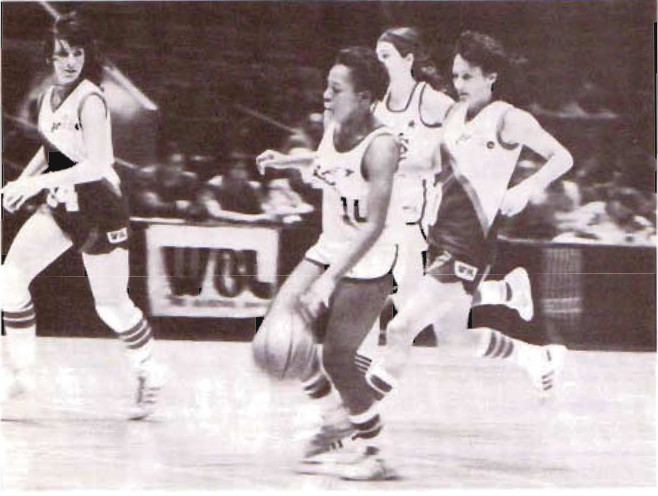 The outlet pass is on its way down the court even before the rebounder gracefully alights on the floor. A dribble around the back, between the legs and a twirl, and the player is airborne, releasing the ball at the height of the jump. The ball whizzes through the air into the hoop, fluttering the net ever so slightly. Who has executed that masterful move? Is it Earl Monroe? Is it Tiny Archibald? No, it’s Janice Thomas doing her thing for the New York Stars of the Women’s Professional Basketball League.

Now in its second year, the Women’s Basketball League has already expanded from eight teams to a league with franchises in fourteen cities. With bigger arenas to play in this year, with better players and experienced coaches, the league has assured itself of ever-growing fan interest and support.

Our local franchise, the NY Stars, exemplifies this growth better than any other team in the WBL. Last year, their home was Iona College’s field house [capacity 3,000], in New Rochelle, NY. This year, the NY Stars will play eleven games in the main arena in Madison Square Garden: six games as part of a doubleheader with the NY Knicks and five solo appearances. The balance of the season’s games will be played in the Garden’s Felt Forum.

To make the team more competitive [last season the NY Stars finished second in the Eastern Division], the front office has signed on experienced free agents and promising draft choices. Ex Olympian Gail Marquis, Denise Craig, the second leading rebounder in the league last season [the Stars Althea Gwyn led the WBL], and Gail Tatterson, who was the league leader in field goal percentage [64.6%], are some of the top free agents in the team’s rejuvenated lineup. Draft choices Sharon Farrah and super-shooter Pearl Moore, the all-time highest collegiate scorer 4,061 points), men included, will add even more firepower. These additions, along with the return of Althea Gwyn, the league’s top rebounder [17.3 per game] and third highest scorer [23.2 ppg.], Kaye and Faye Young, those twin hotshots, and all-point guard Janice Thomas, may very well make this a championship season for the NY Stars.

But a bigger arena and a gallery of superstars do not alone produce a championship team. A third ingredient is needed: the coach. It is he who must mold all the team’s different components into a smooth working unit. This task will be the harness of the man known to NY basketball fans as Dean The Dream Meminger. Dean brings to his coaching duties some very impressive credentials. One of the only two high school players to make the all-city team 3 years in a row [Kareem Abdul Jabbar was the other], Meminger was the star of Marquette University’s team. 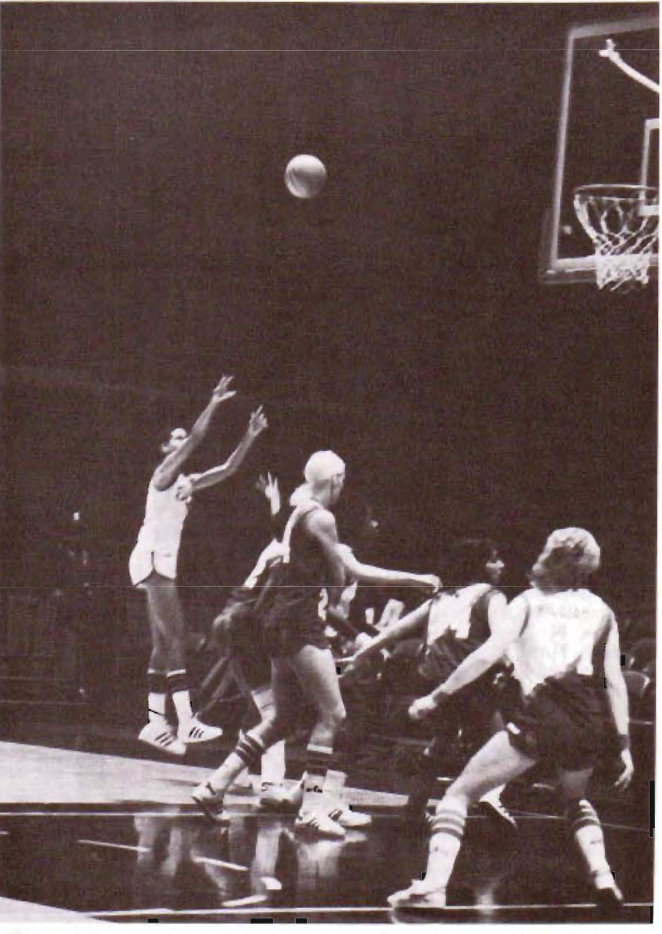 Under coach Al McGuire, he led the Warriors to a National Invitational Tournament championship at Madison Square Garden in 1970, Subsequently named the most valuable player in the N.I.T., Meminger returned to New York as the number one draft pick of the New York Knickerbockers and was very instrumental in helping the Knicks capture a championship in the 1972-73 season. While still a Knick, he shared back court duties with Walt Frazier and Earl Monroe. Later he was traded to Atlanta, with whom he creditably wound up his playing career.

Playing under coaches like McGuire and Red Holzman helped Dean to form some winning theories about coaching. Meminger views learning the fundamentals, conditioning and a hard-line defense as the formula for producing victories this season. Naturally, coaching women will be challenging for me, he says. Women players aren’t quite as developed as males in terms of understanding the concept and nuances of the game of basketball. If we’re going ta have women playing professional basketball, the fans are bound to expect a certain level of play. If we don’t give spectators a quality game, we won’t have any fans in the stands. I expect to mold a disciplined team-oriented club that will bring another championship to New York. One of the things I’m trying to develop in our players is toughness, a mental and a physical toughness. There are times when a player can compensate for lack of expertise by being mentally tough. But if you don’t have the mental toughness, you’re not going to develop it ever night, the rookie coach emphasizes.

How do the women players react to working under a male coach? [Ironically, all of the WBL coaches are male, the better women coaches having opted for college basketball which has also grown significantly in stature in recent years.] The players express the greatest respect for Dean’s ability as a coach. Several of the Stars note how he tries to improve their game rather than to change it. Denise Craig points out that “Dean is teaching us the things we don’t know. Whatever you don’t know, he’ll teach. He’s a hellified coach.”

The players all are very optimistic about the WBL’s second season. All-pro Althea Gwyn confides, “I’m really excited about our progress. The league is growing and women’s sports are on the rise. We’re playing in the Garden this year, too, which is very significant. By allowing us to play there, the men have shown that they finally take us women players seriously. Last year, she continues, a lot of people had the attitude that we were a freak show, but by the end of the season, they learned to appreciate our game and became really dedicated fans.

Although there are no Dr. Js or Abdul-Jabbars in the WBL, the future looks promising. One potential star candidate is Janice Thomas, whose shake and bake moves are an exciting and integral part of the Stars’s winning ways. Dean comments, “J.T. is just a natural leader out on the floor. She makes things happen for the N.Y. Stars. The former Long Island University player was an all-star for the WBL’s East Team last season and also led the circuit in free throw percentage [.778]. But the Stars really have no individual stars because every game, win or lose, is a team effort.

Coach Meminger, confident of the team’s chances this season, states with a smile, “If we’re going to struggle, let us struggle early in the season.” His primary concern is that the team should not peak too soon and thus burn itself out before the playoffs. In the past, Meminger has won championships playing in high school, college and NBA teams. If the N.Y. Stars win the coveted trophy this season, Meminger’s career will have come full circle. New York’s basketball fans are hungry for a winner again, and the Stars could very well fill the void. Anyway, I’m going to wish upon a Star and see what happens.