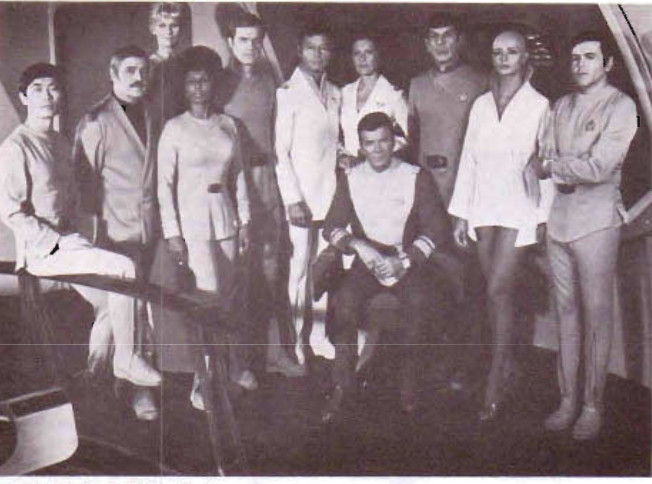 The Starship Enterprise is on yet another leg of its five-year mission to boldly go where no man has gone before. The regular crew is on the bridge. In the middle sits Captain Kirk, the Anglo-Saxon hero. At his side are the faithful Dr. Spock, the pointy-eared Vulcan and the irritable Dr. McCoy. Looking like a pair of bookends, a Russian and an Oriental technician stand by the forward controls.

Over on the upper left-hand corner of the television screen, however, appears a statuesque figure that was the real reason my friends and I dutifully spent our adolescent Friday nights glued to the tube — Super competent Lieutenant Uhura. In a TV landscape barren of sensuality, Uhura was a cool, efficient turn-on.

Her sex appeal was never overt. She was a model woman — career-oriented, professional and maturely attractive. To me, Uhura was the stuff teenage dreams are made of.

Nichelle Nichols, the actress who embodied this strong vision of womanhood, was born in Robbins, Illinois, where she developed an early love of the theatrical world. As a child, “I was always writing plays and getting the neighborhood children to perform them in the street,” she reminisced in an interview with ROUTES.

Her first break came at the age of 16, when the legendary Duke Ellington arrived in Chicago for a series of nightclub dates, Nichelle had choreographed a ballet to one of his musical suites and was able to present it to him. Ellington was so impressed that he incorporated the number in his stage show and subsequently hired her as a dancer/singer. Suddenly, she found herself singing with Billy Strayhorn and the other great musicians that were always gathered around Ellington.

Her next step up the ladder was a featured spot in the New York production of Oscar Brown Jr.’s Kicks and Company, in which she had to sing, dance and act. Nichelle feels that the versatility she acquired from her stage and nightclub experience has been her greatest asset, “The problem of ‘What will I do if there are no black parts?’ has never bothered me,” a confident Ms. Nichols declared. “If there were no parts, I’d just take to the nightclub circuit and sing or dance.”

The next major breakthrough for Nichelle came when she was cast in Otto Preminger’s Porgy and Bess (1959). “I had been signed on as a singer, but the set broke down. So I went to Canada for some nightclub engagements, and when I got back to Los Angeles, the parts had been recast. The casting department, however, auditioned her as a dancer, and she was back in the film, in which she shared a graceful dancing sequence with Sammy Davis, Jr., who portrayed Sportin Life.”

During the filming, Nichelle developed an amusing and understanding relationship with producer Preminger, who is notoriously known for his manner of intimidating actors. “I saw through his manner and knew that it was just an act of his own, At heart, I told him, you’re really a very nice man. He wagged his finger at me and demanded that I not go spreading such rumors around the set. Later it became a running joke between us that he would try to catch me not smiling. But he never did.”

Other film roles followed, but nothing significant presented itself until Nichelle landed a supporting role in the television action series The Lieutenant. The series was produced and written by Gene Roddenberry, who later created Star Trek. The Lieutenant contained the kind of message script that helped spark the Star Trek cult. “Roddenberry always stayed with the idea of having a message in the story. I think that is how it should be,” Nichelle concurred, “However, the message shouldn’t overpower the story but complement it.”

In 1966, Nichols was cast to play Lieutenant Uhura in Star Trek. The series inception was a rocky one, especially when the network announced its early demise. Petitions and write-in campaigns immediately got under way. Students from the University of California in Los Angeles went so far as to go on a midnight march to Paramount’s studios to protest the cancellation.

For Nichelle too, the series was something special. “The fans believed and still believe in those characters. The fan mail was incredible,” she said, looking back. “We were affecting people’s lives positively. This seemed especially true among young college-aged viewers. For most of the actors in the series, those roles were the highpoint of their careers, The series had sort of locked many of us into parts forever, even if we went on to do other things.”

Her Star Trek experience spurred Nichelle’s interest in the nation’s space program. During our interview, she recalled that NASA made a presentation at a 1975  Star Trek convention in Chicago. “It was then that I began to educate myself. I met some people at NASA headquarters and asked if I could get a guided tour of a NASA operation. I saw that the space program affected all our lives very positively.

“If the public knew more about the Space program,” a reflective Nichelle continued, “they would understand that monies given to it serve all the people.” Because of her keen interest, she is now a member of the Board of Directors of the National Space Institute and has become part of NASA’s recruitment campaign to attract more women and minority members into its astronaut training program. She also heads her own production company, Women in Motion, and has made a film for the Smithsonian Institute’s National Air and Space Museum entitled What’s In It For Me? Nichelle has even been an observer aboard a Kuiper C-141 (a modified airplane that serves as an airborne lab) on a mission designed to monitor the atmosphere of Saturn and Mars.

Nichelle is convinced that her acquired knowledge of outer space will add new dimensions to her performance in the just-released movie version of Star Trek, directed by Robert Wise. According to Nichelle, the movie, which depicts the Enterprise crew ten years later en route to a special mission, will present many new dimensions to the Star Trek saga.

Nichelle Nichols may not be my idol Lieutenant Uhura in real life, but I did find her to be a very articulate, talented and accomplished lady.