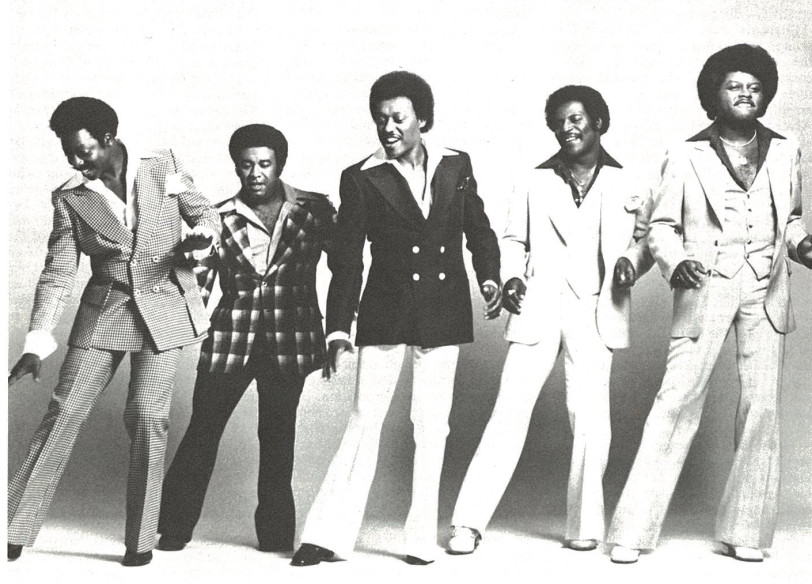 Imagine for a moment, a friend told you that one of the few surviving stand-up singing groups from the 1950s would score in 1980 with an old tune from the 1960s. Would you have believed it? Probably not.

Yet, it has come to pass. The Spinners are scorching the popular music charts with Working My Way Back To You, originally recorded by Frankie Vallie and the Four Seasons during the peak of the surfing and girl-watching era that spawned the Beach Boys, et al.

After a three-year lull — which in the music business is an eternity — the Spinners, whom many proclaimed dead, are back just as big and popular as during the days of I’ll Be Around and, without Philippe Wynne.

“We were cold for two or three years,” Edwards said. “Basically, it was because we were caught by surprise with the popularity of disco. We shifted gears and here we are!”,  he explained.

Edwards said the idea for their hit record came from their producer Michael Zager, who, in the past, has put together some of the most rudimentary disco product (take Let’s All Chant as but one example to prove the point). “Of the Zager-Spinners album concept,” Edwards noted, “we were trying to give the public an album that was danceable, but the trick was to do it without being totally disco.”

The new Spinner admitted that at first, he didn’t like disco, period. “It was mundane — totally boring. Everything sounded the same. You could dance to it, but you couldn’t listen to it.”

He has come to the conclusion that disco is on the decline. “No one should hasten to call out the pallbearers, however. I’m just saying that everything has its place and disco has a place. Not ahead of all other music, not as the thing, but as part of a thing.”

“Disco,” he felt, “began to change when the musicians themselves began to yawn at the boredom they had helped to create. When it got to that advanced state of musical affairs,” Edwards noted, “you began to hear more and more creativity — different sounds.”

Edwards felt that stand-up groups — put down not too long ago by the advocates of punk/funk self-contained groups who traveled with three trailers filled with speakers and amplifiers — are the wave of the future. According to Edwards, his own group, as well as the O’ Jays, the Manhattans, Harold Melvin and the Bluenotes, and to an extent the Four Tops and Temptations, will be the ones to beat in the 1980s. They will be the groups who will hog the Top Ten.

“You’ll notice,” he amplified, “that there are more and more ballads making the charts now than four or five years ago. Look at Do It To Me by The Captain and Tenille. The Commodores score every time they put out a ballad — Still or Three Times The Lady.” Edwards surmised, “I’m saying that music is moving back to the basics. Back to fundamental rhythm and blues. Maybe I shouldn’t say, going back, because the music is steadily evolving. But it’s going back to basics.”

The Spinners’s latest chart caper seems to bear witness to his prognosis. So much for the idea that rhythm and blues groups from the last two decades can’t compete with today’s glitter, electronics and deafening 4/4 beat.

“On the Spinners new album, Dancin’ and Lovin’,” Edwards said, “the group sought to bring out music into the mainstream of what is happening. And of course, since Working My Way Back To You has gotten radio play, the album is selling better than when it was first released.”

Edwards was born in St. Louis and raised in Chicago. He lived in the Miami/Fort Lauderdale area for a while and still calls it home even though he currently resides in Detroit, along with the rest of the Spinners.

He had no formal music training, but picked up his knowledge from others. Before he entered the armed services, he sang gospel and played bass. He saw action in Vietnam in 1968, but decided to get out of the military because “it’s one thing to talk about it, and another thing to be shot at and possibly killed. And it was something about that that didn’t sit well with me.”

After active duty, he spent a year flopping around, trying to get his head screwed on properly, as he called it. He dabbed in broadcasting and headed for Atlanta, Georgia where he hooked up with the General Recording Corporation (GRC). In 1973, he met the Spinners casually and in 1974, when he had become a lower-echelon solo performer, opened a concert for the group in Toledo, Ohio.

A year later, Philippe Wynne took ill and the Spinners, remembering Edwards’s performance in Toledo, asked him to substitute for the ailing singer.

But in the meantime, Edwards was actively pursuing his own solo career. He recorded one album for Cotillion called Life, Love and Living, which was the second album effort after a more meager album had been released by GRC earlier.

But while Edwards was breaking his back dreaming of solo stardom, the Spinners were one of the hottest groups in the land. Theirs  had been a genuine Cinderella success story. The group originally formed in Detroit and took their name from the nickname the people in the Motor City gave to auto hubcaps. The group toured with army shows for years and sooner or later — as was the case with most Detroit talent — wound up in the recording studios of Berry Gordy’s Motown Record Corporation.

Much has been said and written about the Spinners’ tenure at Motown. Fact is that they were not a priority act and thus were not given the best material to work with. In fact, according to some sources, the Spinners at times worked as chauffeurs and gofers at the company in order to get paid. The Spinners finally left and took with them nothing but their name. They had a friend in Aretha Franklin, who hooked them up with Atlantic Record Company execs, whose roster of artists was Berry Gordy’s stiffest competition. Before there was time for the public to say The Spinners are deader than dead, they struck gold. And they stuck gold again and again with chart buster after chart buster.

Their success was even applauded by the top brass at their former record company, Motown. Trade publications made a bundle sponsoring special Spinners issues. They were the hottest items around. But like the fate that befell Dionne Warwick — with whom they recorded a joint hit tune — success soon eluded the group, especially when it was announced that Philippe Wynne would leave. But Billy Henderson, one of the original members, refused to give up. All the trophies and awards in his modest Detroit home were telling him: You can’t stop now. No matter what.

“Philippe and the Spinners were synonymous,” Edwards looked back. “All of their big hits were fostered during this time. The first 18 months I was with the group, people were making comparisons. And I didn’t sound like Philippe. It was a pressure cooker for the whole group, but especially for me.”

“Eventually,” he concluded,” people began to realize that the new kid wasn’t going to be a carbon copy of Philippe.”

Will the Spinners survive or is their current popularity a mere coincidence? The answer isn’t simple and record company execs and group managers don’t have crystal balls at their disposal. But Edwards has a few thoughts on the subject. “A lot of it has to do with money — how much a company is going to invest in you,” according to Edwards, who has seen the ups and downs, a lot of acts get big because of the funds pumped into their careers. “If an act used lots of gimmicks, they got lots of money,” he said, while many stand-up groups and rhythm and blues singers were having mere crumbs invested in their music. But it appears that the investment strategy has backfired. The industry is in trouble because it ignored the handwriting on the wall. They went after disco and after the dollar, not realizing, in fact, that disco was a transient thing.

Edwards went so far as to predict that unless the industry sought to achieve a certain level of equity, instead of putting the issue on the back burner, it could cause a crack in the business.

It seems that the words cross-over and universal appeal will have a lot to do with the shaping of the business in the near future. Edwards says that he can’t remember the Spinners playing either to an all-black or all-white audience. They sing to and for all. “We’ll sing on the street corner if we have to.”

Very well put. The current chart signals point in the Spinners’s philosophical direction. Stand-up groups just might become the pace setters again, because, as Edwards so convincingly pointed out, they are more in touch with the roots of the music. And after all the special effects, laser beams, spaceships and million dollar decibels are relics of the past, it will once again come down to who can harmonize the best and touch people’s souls.

The Spinners seem to fit very well into the scheme of things to come.