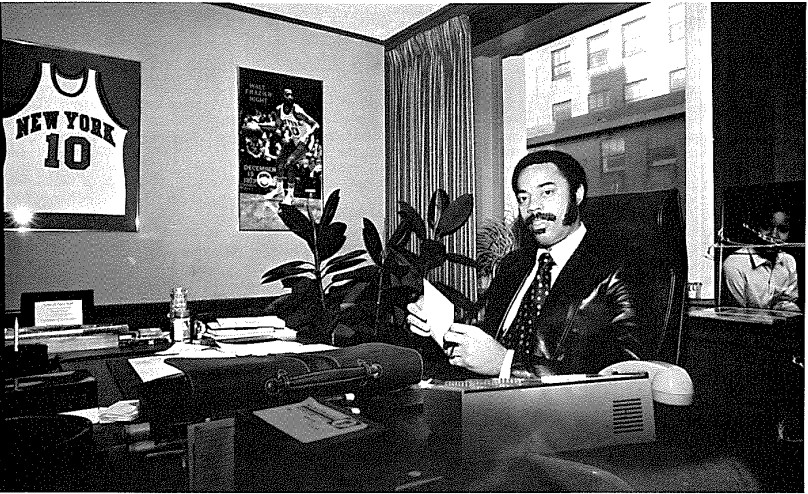 On the night of December 15, 1979, while earth sped towards the end of the decade, 19,591 screaming fans filled the main arena at Madison Square Garden to pay tribute to the decade’s floor leader of the New York Knicks — the inimitable Walter Clyde Frazier.

“Walt Frazier has been something special,” said Simone Gourdine, the Assistant Commissioner to the National Basketball Association, sitting at court side, “not only to the New York Knickerbockers, but to the entire NBA. He is truly one of the great, gifted athletes, and I would not miss being here to honor him for anything in the world.”

Walt Frazier has indeed, been something special. His well-catalogued exploits within the parameters of the basketball court, aptly document his just deserve of a team’s highest honor to one of its players — the retirement of his number 10. The league’s highest honor — induction to the Hall of Fame — surely cannot be far behind.

It was Frazier’s fusion into the beat and pulse of New York City, and his legendary exploits on and off the court that made him special to the Big Apple. Frazier set as yet unparalleled standards of superior excellence within his basketball milieu that rang in the 1970s with New York’s first NBA championship. And off the court, in leaps and bounds, he went from penny loafers, pegged-legged pants, and trench coats, to big hats and coats made from elephant and mink skins. He quickly moved from a single room at the old Paramount Hotel on West 46th Street to a penthouse on the posh East Side.

Influenced by a rather naive country heritage, he set circular black sofas and gauche objects des arts in high pile red carpets. And yielding to the latent instincts of Narcissus, he made his bed round, clothed it in mink spreads and set it beneath a mirrored ceiling. Clyde possessed Walt Frazier and a legend was born.

Frazier was super and fly long before Ron O’Neal. He was a media bonanza, whether spotted at a pop concert or at a sparsely attended recital at Alice Tully Hall. He was a familiar and welcome face along Second Avenue as well as at the Upper West Side’s Cellar or Rust Brown’s night spot, Harlem’s Baby Grand, and Small‘s Paradise. With feature stories in every national magazine, he was the toast of the town, a national personality and a consummate superstar.

The annual dollars swelled from mere thousands to hundreds of thousands. The Eldorado’s became Silver Clouds and Nixon’s devastating economic policies had not yet taken effect. The juices of the Big Apple flowed ever so sweetly. The rude awakening was yet off in the distance.

Then Frazier’s iron-man body became vulnerable to injury, fractions fell off his timing, and the Knicks fell from champions to chumpions. Frazier’s glass tower became his glass cage.

“I did not go out much during the bad times,” Frazier reminisced as he laid back in the chair of the Chairman of the Board of Walt Frazier Enterprises, 17 floors high above the hustle and bustle of Lexington Avenue. After a momentary pause, he said,  “I withdrew into myself, did a lot of reading and the adversity made me a better man.”

Few, it seemed, bothered to notice that Frazier had already dismounted his high horse voluntaril — long before his detractors (seeking to satisfy certain appetites for vindictiveness) decided to knock him off. He might have been spared, had he committed some of those forgivable sins like Joe Namath’s Bachelors III; or gotten himself involved in a nasty contract dispute born out of an inflated sense of self-worth; led the league in technical fouls(he never got one in 12 years); threatened to beat up his coach on the bench; or gotten himself arrested for any minor breach of the law.

But no, his sins were perhaps the unforgivable sins like Joe Namath’s Bachelors III; or gotten himself involved worst of all, not trusting a sports press corps that could never get his quotes right.

So, like shipping the Queensboro Bridge to Lake Erie without the East River, Frazier was exiled to Cleveland without the blue, orange and white of the Knicks.

“In Cleveland, it was always gray and overcast, raining or snowing. It was depressing just to get up and think about going out. If it was cold here in New York, it was always colder there. If it snowed here it was twice as deep there. But in retrospect,” Frazier went on, “I’m glad it happened. Had I not been traded, I would not be the person that I am today — I’m just plain old Walt now — Clyde is no more.”

“I am, of course, curious to know what Walt is like today. My ego diminished about 60 percent,” he admitted. “And I am grateful for so very much. I am really the same person that I was before Clyde — quiet, shy, a man of  very few words. I was frightened, insecure and frustrated, in the early days of my career. Now I am secure and for the most part, happy. I have no malice in my heart for anyone. The sport has been good to me. I enjoy giving to other people, especially kids, and I want to give something back to New York now.”

Frazier shuffled some papers on his desk and quoted rapid-fire from statistics issued by the New York State Division of Substance Abuse Services, which bared erosion of the framework of today’s youth. “In the light of what happened to my own family, (Frazier lost two sisters in fatal accidents under the influence of controlled substances) I think these things are important.”

His giving something back takes the form of public speaking, public service announcements on television and radio, or “whatever I can do to combat a very real problem,” he says.

The cool and charismatic charm that was a big part of the 1970s Clyde still shows through the quiet and proud humility of  Walt Frazier, vintage 1980. Walt Frazier, Mr. Average New Yorker, who might be seen jogging in Central Park as he preps for the Marathon in 1981, cooling out in a bar or club, or shopping in the supermarket for a favorite menu, which excludes red meats, but may include fish, scrod, or sole, with celery, carrots, broccoli, bean curd, onions, or Brussel sprouts. “I can have a good time doing nothing,” Frazier interjected. “Just looking at people is enough for me.” Frazier, it seems is content to know that he has returned to the city that exiled him, that he has embraced it as home, that she, in turn has embraced him as her son.

The retired Number 10 says for all of New York: Thanks, Walt, and Welcome Home!