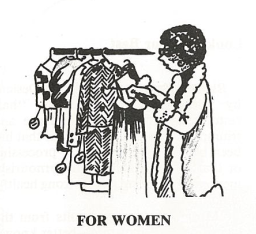 There can be no mistake about it — we are in the midst of some depressing economic times. Everybody feels it, rich or poor — it’s just a matter of degrees as to how much it’s going to hurt. But the need for the basics, especially for clothes to work or to socialize in, has not decreased, even though our salaries seem to buy less and less of the things we want. Thankfully, they’re many ways to get around paying New York’s infamous high prices for quality clothing.

True, it is much more convenient to patronize the centrally located major department stores, but consider this: you pay dearly for this convenience as well as for the chic displays, the hundreds of salespeople, security guards, and elevator operators. Advertising costs, high rents, and trendy shopping bags are also reflected in the price you’re asked to pay for your purchases.

So, if you’ve avoided going shopping because you know that all you’re going to get is a case of the blues — there’s good news and there are many places to shop that will help lift your spirits. For example, amidst the clutter of Orchard Street from Houston to Grand Streets, you can find everything from sneakers, scarves, and children’s wear, to luggage, leather goods, and designer, as well as top quality name brand clothing, at low, low prices. The garment district, from 36th to 41st Streets between 7th and 8th Avenues, have hundreds of dress houses and manufacturers of coats, suits, better sportswear, and blouses. Some of them allow their customers to come in and shop wholesale, but do not advertise it. Discount stores abound throughout the City, in fact, the more I searched for stores that offer fashion bargains — the more I found. It is impossible to list them all, but here are some suggestions for places to visit so that you can be well dressed without going broke.

Blue La Femme Ltd., 108 Orchard Street, 677-3316, is a wonderful little store that specializes in designer imports from Italy and France for 60 percent less than what they would cost at Saks. They’ve got imported bags, sweaters, dresses, and 100 percent silk blouses that are a good buy.

Mr. Hendel, owner and manager of Hendel, Inc., 325 Grand Street, 226-0440, claims he’s selling designer jeans for the cheapest price in the country. He’s got a large selection of jeans by Gloria Vanderbilt, Kasper, Anne Klein, Charlotte Ford, Jordache, Bill Blass, and others at 40 percent off the regular price. Another good buy here: raincoats by London Fog, Misty Harbor, and Harve Bernard at 25 percent off.

Renell Boutique, Inc. 2931 Broadway (near 115 Street) 749-4749. Some of the best buys in women’s sportswear were found at Renell’s, where manager Lisa Jordan told me that everything in the store is sold near, or below original wholesale prices. Generally, she offers 40 percent off nationally advertised brands, but you can find bargains of up to 76 percent off sportswear by Fox Run, Ralph Lauren, Carol Horn, Diane Von Furstenberg, Halston, Jonathan Logan, and others. For example, blouses that usually sell for $44 each were Being sold 2 for $25, linen Blazers were $69.99 reduced from $115, baggy pants for spring were $25.55 from $50.

At S&W 7th Avenue, (corner W. 26th Street), 924-6656, where you’ll abhor the decor, but the bargains they’re just divine you’ll find four shops on the same corner featuring sportswear and dresses, coats, evening wear and accessories, and a budget shop. The top designer’s collections are in these stores — Pauline Trigere, Pierre Cardin, Hanae Mori, Oscar de la Renta and more, for up to 70 percent off. Blazers were marked down to $49.75 from $250, John Anthony coats were $79.75 from $280. The petite woman will find happiness here; they have lots of sizes 2 and 4.

P.J. Goodstuff, 104 Orchard Street, 673-1764, carries a complete line of top-of-the-line clothing, including underwear, accessories, and tennis wear. Most of their stock is imported, including tasteful suits and designs by Rafael, Bill Kaiserman, Cacharel, Lee Wright, Oscar de la Renta, and more. Everything is 20 percent and more off regular prices.

Burtons, 475 5th Avenue, Suite 203 (41st Street), 685-3760, specializes in traditional and conservative quality menswear, in natural fibers of the Brooks Brothers and Paul Stewart variety. But their clothes have Burton’s labels and they sell for 20 percent less. They’ve got three rooms filled with suits, sweaters, shoes, coats, and accessories.

For Men And Women

There’s an upstairs store called the Designers Connection, 102 Orchard Street, 677-4080, that carries sportswear exclusively by Geoffrey Beene and Givenchy. You can find Beene jeans reduced from $40 to $23.99, Givenchy silk shirts for $29.99, as well as a complete line of men’s and women’s sportswear only by these two popular designers.

Syms 45 Park Place, 791-1199, is a like big warehouse-type department store where they have three floors of complete lines of men’s and women’s wear, as well as accessories, luggage, and even placemats, blankets, and towels. They carry all the top designers and name brands, but don’t like to be called a discount store. Instead, they say they put merchandise at less than wholesale, and sell at off-prices. The tags let you know when the merchandise first came on the floor, the nationally advertised price, the Syms price, and about every ten days, the price goes down even further. They also have large sizes.

Flair’s Edge, 110 Orchard Street (corner of Delancey), 673-3001. A stylish shoe store (one of few fashionably decorated in the Delancey Street Area) offers designer shoes for men and women in including styles by Charles Jordan, Andrew Geller, Joan and David, Cuoio, Mignani, Calvin Klein, Yves St. Laurent, and others. All shoes are 20-30 percent cheaper than the prices in major department and shoe stores. During sale days, you can get up to one-half off. For example, when I was there, all the boots were on sale — no pair was higher than $59.99. This is one of few stores in the area open on Saturday.

Jerri’s, 2611 Broadway, 866-2820, and 538 Second Avenue, 889-6491, offers designer shoes for women. All shoes are at least 23 percent off. Upon entering the uptown store, you’re faced with floor to ceiling racks of shoes separated by shoe size. Check these racks carefully, you might find something you’ve been looking for, at an even cheaper price.

C. Schachner Fashion, Inc., 95 Delancey Street, 677-0700, offers 30 percent or more off robes, hosiery, underwear, andthe for men, children. In stock: most of the better brands, including Danskin, Vanity Fair, Kaiser, and Hanes. Danskin disco dresses were reduced from $38 to $23.

At A. Rosenthal, Inc., 92 Orchard Street, 473-5428 the store is crowded, lots of merchandise hanging everywhere, but the prices are worth it. You can purchase sports bras, bathrobes, and all kinds of lingerie by John Kloss, Formfit, Christian Dior, Lily of France, Pucci, and others. All items are first quality—no irregulars. They ship all over the country, but don’t accept checks.

And for those who have the time and the talent, S. Beckenstein, Inc., has two stores on Orchard Street. 118 Orchard specializes in fabrics for men’s suits and clothing including gabardines in 20 colors, cashmeres, flannels, wools at up to 50 percent off, and a whole floor of specially low-priced remnants. Across the street at 123-125 Orchard are what’s known as the world’s largest selection of woolens, silks, and draperies. For spring, they’re already stocked in 100 percent cotton in bright, beautiful colors, and unusual patterns. Also, linens for casual and cruise wear, and a large selection of fabrics for making casual and evening wear that are washable and easy to maintain. Also available are large quantities of patterns, trimmings, and notions at a low price.