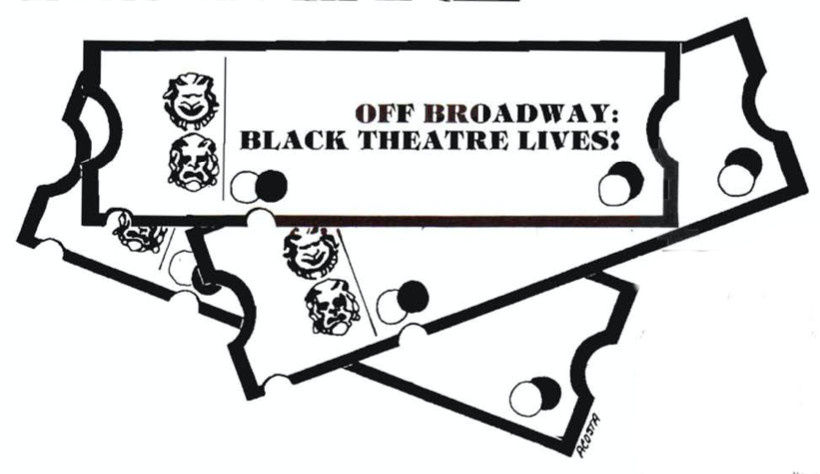 “Broadway doen’t want our blackness, wasn’t designed or intended for it, definitely doesn’t want any new strange forms inspired by that very blackness. She is a contented, fat, white cow. If you can slip in and milk her for a minute – well, then more power to you, bother. But we are telling you, bother it’s a weird price she’s asking. She wants you to be a singing hyena, dancing on the graves of yourself and everyone you know.”

These words were written ten years ago by Woodie King and Ron Milner in their Introduction to Black Drama Anthology, May 1970. We might express them differently now, maybe use a more sophisticated tone for the 1980s. But the message is the same. Fact is — in the past 25 years, there have been only three commercially successful black dramas on Broadway: Raisin in the Sun, The River Niger, and For Colored Girls Who Have Considered Suicide When the Rainbow is Enuf.

This excludes musicals and revivals of plays with all-black casts. But overall, for some depth in history and experiences of Black America, one must look elsewhere.

However, we don’t have to go far. There are several off and off-off Broadway theaters around the city, sometimes, in places where you’d least expect them. They live up to the ideal of producing high quality and meaningful shows reflecting the many realities of black life, black theatre and black art.

“These theaters open the doors to teach aspiring young people of all ethnic backgrounds and give them an area to experiment under workshop conditions,” says Rosetta LeNoire, director of the AMAS Repertory Theatre, Inc. at 1 East 104th Street. It was at her theatre, now housed in an old school building, that the hit musical Bubbling Brown Sugar was first conceived. Such small companies are the stepping stones, the training and grooming grounds for skill, experience and exposure to someday make it in the big time. But that does not compromise the quality or professionalism of the plays because many of the shows that go on to Broadway were born in off-Broadway theaters. In theatre like these you could see the works before the Broadway theaters — Don’t Bother Me, I Can’t Cope, For Colored Girls…, Mighty Gents, and The River Niger.

Douglas Turner Ward, artistic director of the Negro Ensemble Company (NEC) at the St. Marks Playhouse, 133 Second Avenue, says, “We wouldn’t be here today if it hadn’t been for what happened in the streets in the 60s. Black theatre sprung up with the rise and explosion of black peoples struggles and insistence on equality in all areas of life, for their rights and liberation from their past of slavery and servitude.”

Among the many off-Broadway outlets is the Richard Allen Center for Culture and Art (RACCA) at 36 West 62nd Street. Their recent season included a stunning production of Antigone, the classic drama by the Greek writer and philosopher, Sophocles. Why a Greek play for a black theatre company? Manager Ty Collins explains, “We are moving into the realm of multi-cultural experiences for wide audiences. We do one of the classics every season.”

Antigone brought together Trazana Beverly, the Tony Award winning Lady in Red from For Colored Girls…, as Antigone, and Arthur Burghardt from television’s One Life to Live as Creon, the King of Thebes.

The Richard Allen Center also produced last year’s first Black Theatre Festival, USA, which brought together dance and theatre companies, choirs, musicians and singers from across the country for a month-long celebration at Lincoln Center. The second festival is set for this spring and will include the Nigerian National Theatre, the Jamaican National Dance Theatre and others.

The Frank Silvera Writers Workshop (FSWW) is nurturing plays, mostly by black playwrights. Twice a week, the manuscripts of established, as well as the works of promising newcomers are read by professional actors at the workshop loft at 317 West 125th Street. Richard Wesley’s The Mighty Gents and A. Marcus Hemphill’s innovative Innocent Black and the Five Brothers were read at the FSWW before moving on to other theaters across the country.

The Black Spectrum Theatre at 205-21 Linden Boulevard, St. Albans, reminds us once again that Queens is not the cultural desert it is often thought to be. One of their latest productions has been Precious Lee, set in pre-Civil War America, which deals with the life of a black family and also examines the indignity and trauma of rape that was so often imposed on slave women.

The AUDELCO award winner, Deadwood Dick or That Went That Away was born here.

This year, the National Black Theatre will celebrate its 11th anniversary with a production of the new musical, Whirlwind, written and developed by Executive Producer Barbara Ann Teer. The musical focuses on the career of a black woman and her special relationship with a highly volatile political activist.

Most of these theaters make it their business to steer clear of the theatre of despair, —those plays that tell stories we know all too well — of the wino, the dope dealer, the prostitute, and the pimp.

But the dark cloud hanging over the future of a bright and ambitious black theatre is one that threatens to rain on most of us: lack of money and support. That accounts for the small casts, sparse sets and meager salaries if any at all. It’s no picnic, we are told, to compete for audiences when Broadway and independent producers can afford to shell out $60,000 for one television commercial, while the smaller theatre have little more to go on but private support and mercifully meager federal grants.

But all of off-Broadway’s actors, producers, directors and stagehands agree that there is a cultural gold mine to be found. And you’ll walk away from many a performance a much richer person (with a pocketbook not as strained as on the Great White Way). You might well see the next Broadway smash hit for $3 — with the same cast!

Woodie King and Ron Milner had a point to make, But talented and ambitious theatre people are taking past problems into account only to look optimistically into the future.