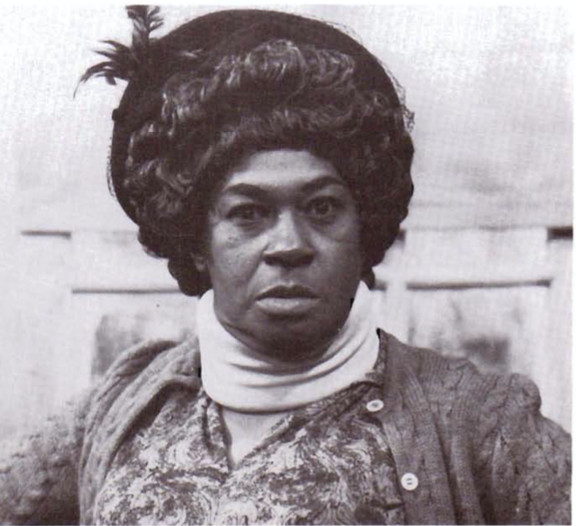 Someone once told me that a man at a hamburger stand somewhere near St. Louis, knew that LaWanda Page used to be a snake dancer before she took on the role of Aunt Esther, Redd Foxx’s punching bag in the television hit series Sanford and Son.

For anyone who has watched her perform, it has become quite obvious that she is not just another sit-com personality, but, in fact, a character actress. But snake dancer, that was a new one.

Actresses like LaWanda Page move in and out of television and film with a quiet ease, bringing a ready-made persona with them to every project. And throughout their career they perform variations on that particular characterization.

For the most part, they are supporting players orbiting around a star, giving help or hell.

LaWanda Page, of course, has brought a lot of hell to the screen through her strong presence and a truckload of talent so well honed that she bursts out of the constraints of the character to become a star in her own right.

After Aunt Esther arrived in the cramped and over-crowded living room of Fred Sanford, she took advantage of so many moments, giving us such fire and brimstone, it made one wonder—whose show is this anyway?

Which brings us to the question: Who is LaWanda Page anyway?

Her story begins in Cleveland, Ohio, where she was born October 19, 1920. As far back as she can remember, LaWanda was entertaining people, although it was not as a comedienne.

I was always dancing then, she told ROUTES — “Just dancing away. Me and four other children used to dance on street corners during the Depression for a nickel or dime. I would dream about being in show business. Like I was Cinderella in a story book, I thought I’d reach it through dancing.”

When the family moved to St. Louis in the late 1940s, LaWanda’s career as a professional entertainer began to take shape. “I only danced at first, but as time went on I had to add more to my act. Customers would come back, and they didn’t wanna see the same old thing.”

So to be different, LaWanda, actually would pull out a long, clinging boa constrictor and let the awesome creature crawl around her body as she danced. So the man at the hamburger stand was right after all. But he apparently only knew half the story.

Always searching for something new to attract paying customers, she decided to stuff flaming, oil-dipped sticks down her throat — the age-old circus fire eating trick.

One night while on tour in Australia, LaWanda, somewhat bored with the regular routine of fire one night and snake the next, decided, for a little variety, to eat fire with the Boa wrapped around her neck. Oh! Bad move.

“The boa didn’t like the fire and bit me,” she exclaimed. “So I decided that was the end of that and I killed that sucker right there in Melbourne, Australia, You better believe that, honey!”

A trip to Los Angeles, around 1952, brought her to the Brass Rail, a famous West Coast stop on the Chitlin Circuit, where black entertainers such as Redd Foxx would make regular visits. LaWanda met Redd there and also the comedy team of Skillet and Leroy. Both relationships would turn into fruitful associations.

At first, her stint at the Brass Rail was limited to dancing, until the day the club owner noticed how LaWanda was cracking up the professional comics backstage with her earthy, dry, sense of humor. So, as was to be expected, the owner made her add a stand-up comedy routine to her role as a member of the chorus line, and also demanded a dance solo spot—all for $125 a week.

“That money was for working seven nights a week, 9 pm until 2am and a matinée on Sunday. I worked there for 15 years and I earned every penny of that money. The Brass Rail is gone now, “she noted with a tone whose ambiguity left you guessing was it “ah” or “good riddance”. “Got burned down in the 1967 Watts riot.”

In retrospect, having been shoved into the comedy spot was the best thing that could have happened to LaWanda. “I was nervous when I first started, but soon I felt very comfortable doing it. I teamed up with Skillet and Leroy, playing a character very similar to Aunt Esther.”

It was during those years with the popular comedy duo that she developed the timing and physical actions that made Aunt Esther an irresistible riot.

LaWanda admitted that Aunt Esther is really her, but she made a clear distinction. Aunt Esther is a religious fanatic. LaWanda Page is deeply religious.” I’m a Baptist and believe deeply in God. My late brother Sam Johnson (a bit player on the old Dean Martin show) was a Baptist minister. But Esther is just an exaggeration of that feeling. She reminds you of a lot of people, just taken a bit further.”

There are a number of stories that have sought to explain how LaWanda, the snake dancer, became Aunt Esther, the religious protagonist, on Sanford and Son. NBC’s version, contained in a press release circa 1974, claimed that producer Aaron Russo was uncertain about casting LaWanda even though Foxx had recommended her for the part. However, says NBC, when Russo saw LaWanda’s act at a Los Angeles club, he found her to be perfect for the role.

LaWanda, however, tells a slightly different story. “Redd definitely recommended me, but he did more than that. When some of the producers weren’t sure about using me, Redd said he would quit the show if I didn’t get the part. A tactic he used often to get his way with the NBC brass. He put that show on the line for me and I’ll never forget him for it.”

Regardless of which story you want to believe, fact is that with LaWanda as part of the Sanford household, the show was number one or close to it for almost all of its five-and-a-half-year run on NBC. The happy marriage ended, due in part, perhaps to swollen heads that the Nielsen ratings had helped to create among the folks at the junk store. Foxx decided to try his hand at a variety show for ABC, which he quickly found to have been a big mistake. Demond Wilson did not help matters much when he asked for more money, per episode, than NBC was ready to pay. Wilson later met his Waterloo on CBS in the short-lived sit-com, Baby, I’m Back.

LaWanda, apparently the only one loyal to the make-believe family living among the rusted antiques of Sanford’s Watts establishment, tried to keep the chemistry going on the spin-off series, Sanford Arms, But even her inspired irascibility couldn’t hold things together.

No one, however, should feel sorry for LaWanda Page. With a unique bundle of talent like hers, she’ll always find work. Most recently, she was part of a team of comic lawyers and amateur detectives in the series Detective School. She has also guested on many television shows, including the Bob Newhart Special and on a charity celebrity roast of Steve Allen. “I never lived better in my life than I do now,” LaWanda explained. “I used to make $125 a week. Now I spend that much in one day.”

She’s just released an album on the Laff label, entitled, Sane Advice. LaWanda described it as a religious comedy album. It’s clean, but fun, with facts about welfare mothers and other things like that. “My writer, Mel Chase, wrote it so that the material can be edited for use in churches, school rooms and nightclubs. “What LaWanda doesn’t mention, although it is hinted in the reference to clean, is that there are a few people who have a copy of an album of not so clean religious material which is said to have been recorded by LaWanda Page. But then again, we all know, and some of us even have, those dirty little albums of Redd Foxx’s that our parents carried home in plain brown wrappers. But who talks about that anymore?

The big thing in LaWanda’s life now is a possible CBS comedy series, entitled *Rejoice.* Not surprisingly it’s to be a religious comedy with Linda Hopkins as co-star. “I can’t say when it will be scheduled. That’s all still being negotiated, “a coy Miss Page said. Meanwhile, she’ll just sit it out in her Los Angeles home, which she says is located in Beverly Watts.

New show or not, LaWanda, who has been widowed three times and has two daughters, one of them adopted, can’t escape the image of herself that has been embedded in the minds of millions of television viewers. Even as the clumsy sleuth in the Detective School, one would sit and wonder when she would pull out her bible and preach.

“I tell you baby,” she explained, “I don’t have a private life anymore. People are always coming up and calling me Aunt Esther. Just the other day I was in the bank taking care of some business and this woman just had to have my autograph. Now I don’t mind signing, but not when I’m in the bank. I was nice about it though, but I sure had to bite my tongue at the time.”

Oh, LaWanda, I know better than that. Now just who was it that once said, “I don’t mind being asked for autographs. It’s when they don’t ask anymore that I get worried.” LaWanda can still count herself among the fortunate. And most importantly, we haven’t heard the last of this lady.