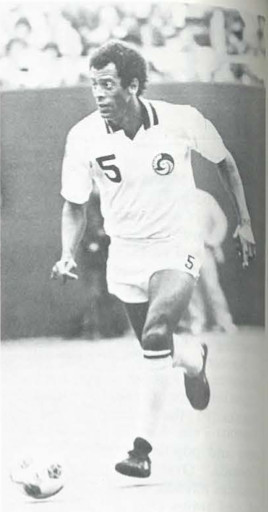 Once hidden in the shadows of football, basketball and baseball, the game of soccer is steadily inching its way toward becoming a major US spectator and participation sport.

The most profound indicators of the Americanization of the game can be seen in the growth of amateur soccer — especially youth soccer, which is attracting thousands of youngsters.

Soccer, once considered as un-American as Russian vodka, has become digestible for domestic consumption thanks to the efforts of the world famous Pele, and the phenomenal success and popularity of the New York Cosmos. Over the past few years stadium attendance has steadily increased and teams have stabilized. In fact, youngsters admire soccer stars like Franz Beckenbauer or Johan Cruyff with the same fervor they have admired baseball heroes, even though most soccer stars in the North American Soccer League (N. A. S. L. ) come from far away countries where soccer is to them what football is to us.

Youth soccer, spawned by the popularity of professional soccer, has introduced the game to children at a very young age, and it is believed that this movement will be the key to developing top rate American players.

“The kids look at it as something special,” explained Peter Nagrod, head coach of the Albertson, L. I.  Soccer Club. “At this level, soccer is one game where they all have a good time. Youth Soccer is pure, it’s soccer for fun. In other sports, winning is more important.” According to many coaches, the philosophy that puts playing before winning is significant. Often the young athlete in popular American Sports is under immense pressure to perform — to win.

In Little League baseball, for instance, the emphasis is on winning. The same applies to Pop Warner football, where injuries are frequent. The pressure, according to some coaches, usually stems from vociferous, anxious, though well-meaning parents, who take the sport more seriously than the kids themselves.

Soccer, on the other hand, is simple, far less dangerous, and requires no elaborate equipment. Just a soccer ball and some open space to play. “The game is not expensive,” Nagrod explained. A soccer ball only costs about $10.

“Parents are finding soccer more attractive for their offspring because kids can play when they’re younger, since physical build is not as important as in other sports,” he added. The big child has no real advantage over the small fry, and athletic skills are balanced out on the soccer field.

Nagrod’s club reflects the growth of the youth soccer movement. During the last two years, the club has grown from 30 to 300 participants who range in age from 5 to 16. The club is divided into 17 teams in varying age groups. Each team has an individual coach, and boys and girls play on the same teams until they are 12 years old.

Youth soccer teams seem to do particularly well in areas where an NASL team is at home. NASL clubs realize that pushing the sport on a neighborhood and school level will eventually lead to higher attendance at home games.

Jim Benedek, soccer coach at Southern Methodist University in Texas, noted, “The Dallas Tornado (a NASL team), started promoting youth soccer in 1970, and now there are 300,000 kids playing the game here. Many of the other professional soccer teams are following suit, actively promoting soccer to the new generation.”

To the north, in Tulsa, Oklahoma, kids in soccer uniforms fill the stadium to watch the hometown Roughnecks, as soccer goals, with their bright yellow nets, are gradually phasing out baseball diamonds in the city’s parks. And to think that up until now the biggest sports thrill in the state was to attend the home games of the University of Oklahoma Sooners college football team!

Professional soccer players are working with the youngsters through soccer clinics and post season camps. The NASL, of course, is also taking an active part in promoting youth soccer. A spokesman for the NASL told ROUTES that the league has a youth soccer program underway with the cooperation of YMCA’s around the country, involving boys and girls ages 6-18. The NASL says the future looks bright.

In some areas, such as St. Louis, Seattle, and Memphis, youth soccer has caught on very quickly. In New York, however, there’s been a problem—there’s no space to play. In New York City, for instance, a grass field can be as hard to find as a taxi in midtown during rush hour. Soccer players in Central Park or Brooklyn’s Prospect Park, often have to compete with softball players, kite flyers, and volleyball players. High school players usually share a field with the football team. On a Sunday morning, Van Courtland Park in the Bronx provides playing space for many amateur leagues and club groups that play on weekends. One regular weekend player said, “Sometimes it’s a hassle.” But it just shows that there is a definite need for more soccer fields, especially since the game has grown and more people are interested in playing.

The biggest obstacle to the blossoming youth soccer movement is the lack of quality coaching. Can Counce, a NASL player, stated, “Kids are getting started when they’re six or seven, but they need the right kind of coaching, which emphasizes individual skills.”

“When I grew up, I was taught that dribbling was bad. If you dribbled, you came out of the game. This really discouraged the player who had a flair. He was always under pressure to pass the ball, instead of trying to dribble the ball closer to the goal. That’s why Americans haven’t developed the individual skills that European and Latin players have.”

Nagrod believes that US soccer will be as good as European soccer because we have greater resources. We also have the technology to improve coaching and training.

In countries where soccer is the national pastime; wars have been fought over soccer games. The development of highly skilled teams and players is almost as important as national security. The players are teethed on soccer balls, and they come up through a farm team system equivalent to our minor league baseball. No such system exists in the US, but the pro teams are scrutinizing college talent with an eye out for the exceptional player. Many experts think that colleges will provide ample talent for the professional soccer teams.

Phil Woosnam the NASL Commissioner, attributes the problem of finding adequate American players to athletes’ inexperience. Am 22-year-olds are comparable to 17 olds in other countries. Faced with the league is interested in developing reserve teams, like baseball’s AA AAA leagues.

Many professional teams developed reserve or B teams. College players have to give up their eligibility or scholarships in order play. Even so, the competition in the minor league soccer won’t be tough enough to acquire the needed skill agility that the NASL demands. Some pro teams have signed very tale youngsters right out of high school in order to develop them on reserve teams. But many frown on the idea. One collegiate player said, “A sounder approach is to try to upgrade the college game so that a player coming out of college will be ready for the pro’s.

Will the rising popularity of continue? Only time will tell. If youth soccer boom is any indication things are looking up. It’s quits becoming a true participation sport,  people of all ages take to the s0 fields with vibrant enthusiasm.

“The soccer explosion has come to the US,” comments Nagrod, “and there’s no stopping it now.”