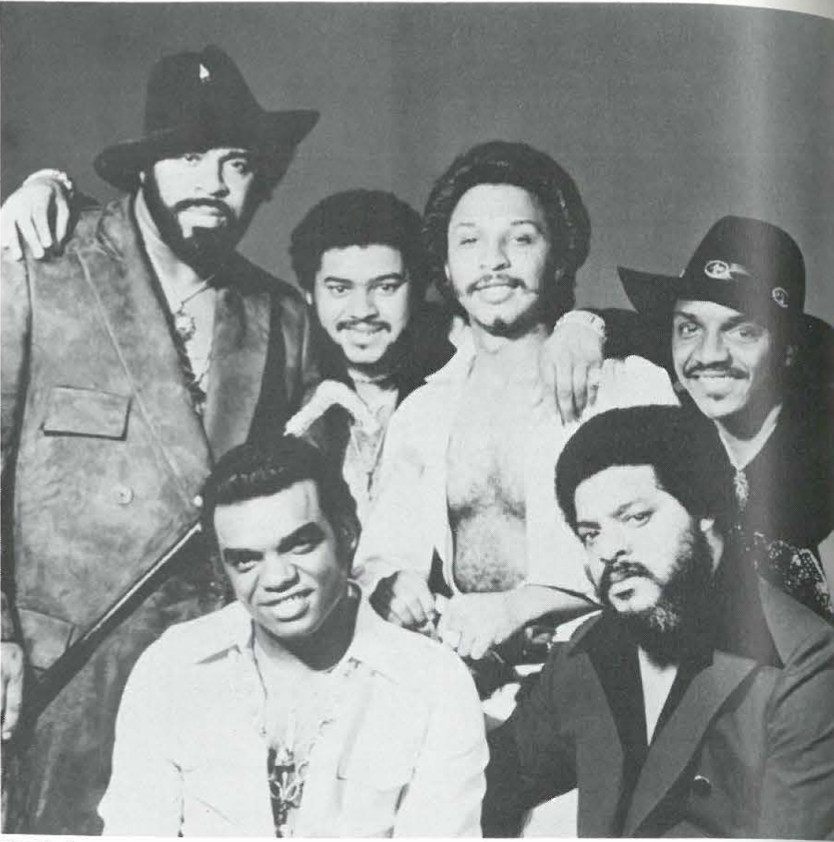 In 1959, three brothers made a name for themselves with an in-house production entitled, Shout! Little did Ronald, O’Kelly and Rudolph Isley, know that they were setting the stage for a musical act that would survive the 1960s, the new-wave and psychedelic 1970s, and start off this decade with yet another smash hit. Over the years, the Isley Brothers shifted a few gears, made a few adjustments here and there, and remain among the most creative groups today.

The group’s major change involved personnel, and with it came new ideas and a large pool of creative minds that would give the record buying public something new to look forward to. The personnel change also meant a name change: The Isley Brothers became simply the Isleys, as they were joined by younger brothers Marvin and Ernie, and brother-in-law, Chris Jasper. The result was a total act, as Marvin Isley described it.

When I spoke with Marvin, the family was preparing for their date with the 20,000 that are expected to fill Madison Square Garden for an Isley concert in June. Marvin was in the mood to talk about music and I was a more than willing audience.

After all, the Isleys are all about music. It is difficult to complain after one hears an Isley album and next to impossible to gripe after experiencing the group live. Few can resist the gut-level funk of their foot stompers; and fewer still can claim not being moved by their sensual tunes. It is, in fact, fascinating to witness them make those smooth transitions from the I-gotta-dance music to the turn-off-the-lights stuff. In fact, Marvin says—with a smile—the group recorded Fight The Power and For The Love Of You, from their album, The Heat Is On, during the same studio session.

“When we do something, we do it,” Marvin explained. “Whether it is in the studio or on the stage, we say to ourselves, okay, let’s make them feel this one, and when we get into it, the audience response or the record sales tell us that people are into the music as much as we are.”

“When we feel a fire,” he continued, “we recreate it for mass consumption. “The Isley Brothers mass consumption is the term that would be apropos for Don’t Say Goodnight, the pleading ballad from their album Go All The Way. Marvin attributed the success of the single to the group’s philosophy of getting under your skin. “We are talking to the audience. They know it, and they respond,” he said.

“We view our art as a total thing, not just a foot-stomping thing, and that is why we mix it up. No one wants to dance all the time. There are different moods and different feelings. And we put all of that into our music.”

Marvin hit on a point that seems to be increasingly obvious to trendsetters. Audiences are becoming more sophisticated and it is getting to be tough to manipulate tastes. “There are a lot of guys,” he said, “sitting behind desks, pushing papers, who don’t know what is happening. The people are deciding what a hit song is. No executive in the world can make a bad song good, no matter how it is packaged, triple-mixed or otherwise gimmicked up,” Marvin reflected.

If a good song comes along, people are going to buy it no matter what anyone says.

The Isley’s have, in fact, been resistant to fads or so-called in trends. They have remained almost stubbornly independent. Their non-conformity made their stay with Motown Records a rather short one, especially since the bulk of their material was limited to remakes of the hits of other Motown stable artists. The Isley’s were the first Motown group to leave and make it successfully on their own, as a series of hits catapulted them to heights never dreamed of by the original Isley Brothers, whose greatest claim to fame at that time had been This Old heart of Mine (Is Weak For You), Shout, and Twist and Shout, which the Beatles copied.

“The Isley’s wanted to be independent,” Marvin asserted. “That is why we started T-Neck Records. So that we could do our own thing when and how we wanted to do it. If we don’t feel like playing, we don’t play.”

Brother Ronald Isley said at the time: “We’re businessmen now, we really are. We feel we have a sound and a thing that is new. While we were at Motown we learned an awful lot about production, arranging and, even more, about writing. We always wrote songs. Now we are going to do our own stuff.”

Own stuff, they did. And the title of their first major independent record splash, was aptly declared It’s Your Thing, which became an anthem for the do your own thing mood that prevailed in the aftermath of the turbulent Sixties.

One music historian remembered that when the song first hit Great Britain, popular DJ Tony Blackburn, not knowing the Isley Brothers had completed their first solo production, Smart Alecked, “I wish artists former companies would not insist on dipping back into their vaults and reviving old, inferior material.”

Such remarks were never heard of again as the Isley’s charted their musical course through the 1970s. The Isley’s didn’t mind having dry spells, while, according to Marvin, many other artists were forced by release dates to throw a bunch of songs together on an album, and the result is a mediocre album. “Nobody is going to say that the Isleys put a bunch of junk out there. Music is important to us. We want to have class and style, so we do it all ourselves.”

The Isley’s seem to have successfully resisted that pressure, choosing instead to release good material when the group thought they were ready.

In addition to being creators and relying heavily on their own inspirations and musical innovations, the Isleys have never had a problem interpreting the music of others. “We put Summer Breeze on the 3 plus 3 album, because we thought that Seals and Croft had a good tune. And we were right because people still like our interpretation of it.”

The newer Isleys, Marvin, Ernie and Chris Jasper, all went to C. W. Post College, Long Island University, where they received bachelor’s degrees in fine arts. It was there that Marvin first came in contact with jazz pianist Billy Taylor. “It widened my scope,” Marvin reminisced. “I heard different kinds of music and was exposed to different artists.”

I asked Marvin what he thought about today’s musicians, especially his fellow singers/composers and here are some of his observations:

Bernard Edwards and Nile Rogers: They have a good feel for music. They’re really talented and have a lot to say that is worth listening to.

Nick Ashford and Valerie Simpson: Two great songwriters. It is beautiful that they’ve started to perform together. Watch out for A & S, because they’re going to figure prominently in the music of the 1980s.

George Clinton: His music speaks for itself. Very funky. Definitely an innovator.

Rod Templeton: We toured with Heatwave in 1977, and I got into his music then. (Groove Line, Boogie Nights). Very talented writer, as the success of Michael Jackson’s album shows. He’s another one to look at in the 1980s.

Bill Withers: The group worked with him in 1971. He wrote the tune Cold Baloney that is on the Giving It Back album my brothers did. He’s a great individual, a warm person and a songwriter who really communicates with people.

Patrice Rushen: She is a terror on the keyboards. I like her new hit very much,

Buddy Miles: I’m glad you asked about Buddy, because he is overlooked. He’s versatile. He was a leader in the rock stuff, but he gets overshadowed by Hendrix and other musicians.

Chuck Berry: Hey, he was the original rocker. A heavy influence on everything that came later. Chuck Berry, Bo Diddley, Little Richard: those guys were doing it first.

James Cleveland: Speaks for himself. When you talk about the Rev. Cleveland, you’re talking about the basic roots of the music, the foundation.

Bette Davis (the rock musician/composer): I haven’t heard much from her lately. But her music is really funky. And she isn’t often considered to be one of the leaders in rock. But she definitely is.