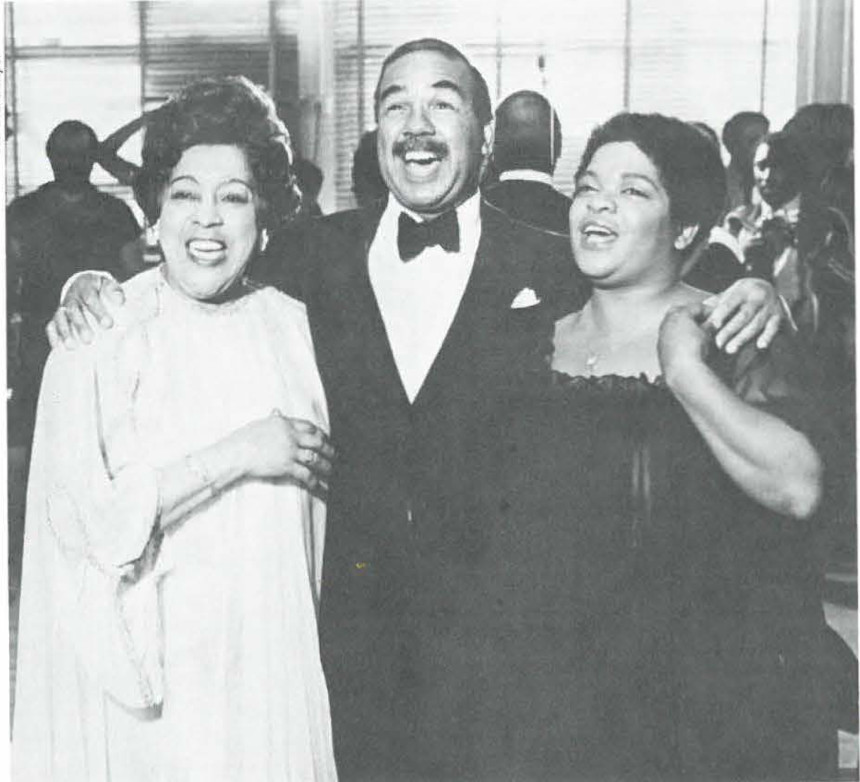 A rousing celebration of the treasures of the Black musical artists who made it on Broadway was indeed a highlight of theatre life in May. Produced by George Wein, Black Broadway took a stroll down memory lane, bringing together the children of Broadway from yesterday and today. Produced in association with Honi Coles, Bobby Short and music historian Robert Kimball, the show paid tribute to Irving Berlin, Eubie Blake, Duke Ellington, George Gershwin, James Weldon Johnson, Cole Porter, Noble Sissle, Fats Waller, Bert Williams, and the many other composers and lyricists whose works were popular in the earlier half of this century.

The Town Hall stage became a living souvenir of the days of cabarets, coon songs, the Charleston and the Cotton Club. Elisabeth Welch (who appeared with Josephine Baker in Sissle and Blake’s The Chocolate Dandies’), recalled Cole Porter’s Love For Sale, while Edith Wilson, the original Aunt Jemima, and one of the first black artists to record for a major record company, kept the memories of Florence Mills alive. And the still glamorous Adelaide Hall contemplated the past as she sang I Can’t Give You Anything But Love and Digga Digga Do.

John W. Bubbles, known as the man who revolutionized tap dancing and the father of syncopated tap, has had to hang up his dancing shoes, due to a stroke which has left him partially paralyzed. But nonetheless, his eyes still dance, and he was filled with a good dose of vitality and humor people half his age couldn’t muster up. on stage, he reminisced about Sportin Life, the role he created in George Gershwin’s Porgy and Bess. Backstage, in his dressing room, Bubbles told ROUTES about his start in theatre.

“I was born in 1902. When I was Seven years old, I sat in a theatre watching a show. I went backstage, told the Manager I could do that and was told to come back the next day. I sang I’m So Glad My Mama Don’t Know Where I’m At and got the job. Been on the stage ever since,” he said.

Bubbles also told me about the history of tap dancing, informing me that it came from the South. “The slave masters wouldn’t allow us to play the drums, so we clapped our hands and stomped our feet. The plantation shows displayed it.”

Black Broadway was narrated by the effervescent Bobby Short, who took you through the production in words, songs and that ever smooth piano playing. He would leave the theatre in the middle of the performance because of an important engagement uptown. Short, is of course, the performer-in-residence at the Café Carlyle. And he’s not the only one that’s busy. For this reason, Black Broadway only ran for three weeks. All of the performers are still getting offers and have other commitments.

Short told ROUTES just before the curtain went up, that the show had originally been performed as a concert during the 1979 Newport Jazz Festival. It was received so well that producers huddled to conceive an expanded version of the concert and bring it to the theatrical stage complete with lighting, set designs and choreography. And so Black Broadway was born.

The magic and beauty of Black Broadway lies not only in the quality of the performers, but in the fact that it has brought together several generations of Broadway entertainers who make light of the so-called generation gap and share with each other the mysteries from the past, and the limitless optimism of the future.

Broadway’s favorite new face, Gregory Hines, once part of Hines, Hines and Dad, who recently starred in Eubie, and Comin’ Uptown, appeared side-by-side with Charles Cookie Cook, star tap dancer for over 50 years, and Leslie Bubba Gaines, who brought fame to the rope dance when he started to tap dance while jumping rope, and doing so at a speed that turned the rope into a whizzing blur. All three looked so great together, showing off their talent and challenging one to outdo the other.

Nell Carter, one of the stars of Fats Waller’s Ain’t Misbehavin’, made a hilarious presence when she saluted Ethel Waters and other Broadway greats, while Duke Ellington’s granddaughter, Mercedes, appeared as one of the chorus girls, giving lots of leg and adding flair to the authenticity of the show.

Black Broadway provided an opportunity to experience the artistry of those who first created a musical style, those who picked it up and added the finesse of their period, and those who are still developing it today. The styles shall never be forgotten, even as new styles continue to evolve.

Perhaps the producers of Black Broadway will see the value of bringing the show back next year or at a time when it could have a longer run, allowing more people to share these precious memories.