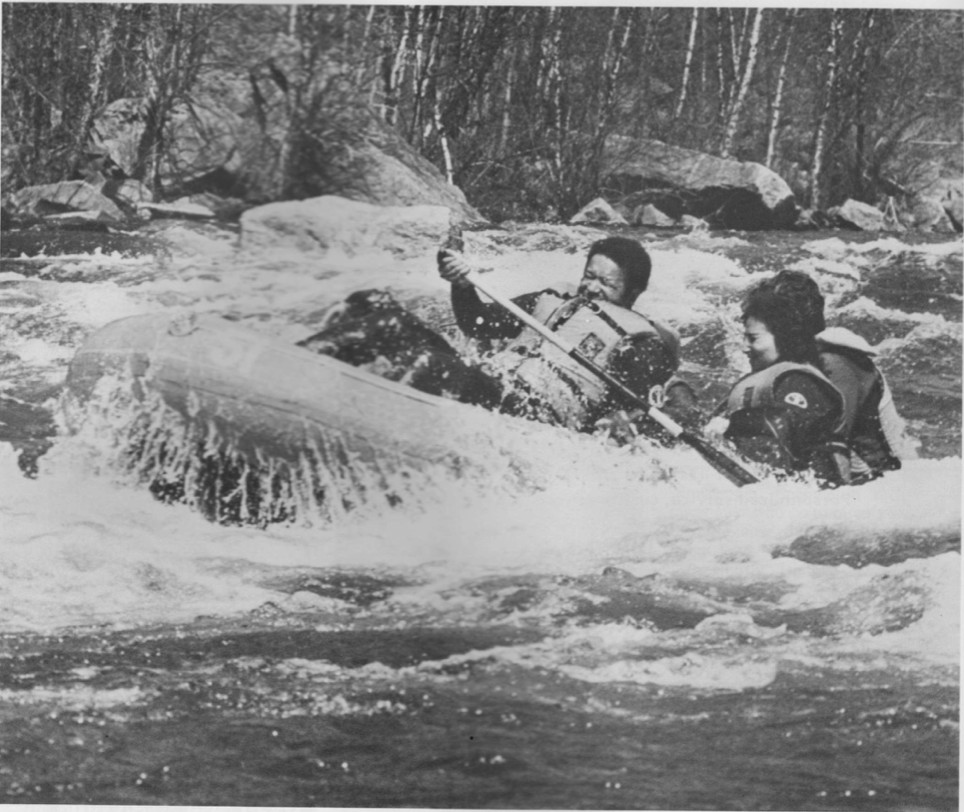 Helyn gasped, Oh God! and a few expletives as our raft pitched, tossed, swirled and dipped its way past massive boulders in the Lehigh River. We were on an eight hour rafting trip that made a ride on the Cyclone in Coney Island seem like a buggy ride through Central Park.

Helyn was scared to death, but I enjoyed the exhilarating sensation, even though my stomach was tied in knots as the thrashing water raised the nose of the raft into the air only to let it come crashing down on a bed of slippery rocks. White, frothy water splashed in our faces while we paddled furiously through the rapids. As our raft headed for a boulder, Barbara, our guide, shouted, “Three sixty degrees! Three sixty degrees!” which meant we had to back paddle the raft into a complete circle to avoid hitting the rock.

The weekend experience is whitewater rafting, a thrilling river expedition down an 18-mile stretch of rushing water in a rubber raft with little paddles as your only sense of security. Finding yourself wrapped around a boulder, soaked to the skin is part of the fun.

No experience necessary. Anyone over ten can do it. It just takes an adventurous spirit, some good instructions and the right gear. For the past four years, in the spring and fall, when seasonal rains and melted mountain snow swell the river, the Pocono Whitewater Rafting Center has been sending a host of rafts down the river at least three times a day. The excitement can reach such a pitch, causing you to yell, scream, laugh or cry.

When I invited Helyn to join me on this rafting trip, she envisioned it as Huckleberry Finn on a wooden raft, lazily cruising down the Mississippi River. The truth of the matter left her somewhat petrified.

We were met by Gary and Catherine Smith, the owners of Split Rock, a cozy lodge resting on a small hill in Lake Harmony, Pennsylvania. It is a pleasant, charming place with a warm country atmosphere and good food.

The following morning we met in the assembly area. The enthusiasm was in no way dampened by the rain. The rafters came in shorts, dungarees, wet suits and life jackets and scurried about calling and waving to their friends and jumping over mud puddles. Nearby, a man was handing out vivid red and orange life jackets to reaching hands. The sight of 75 bodies in those colorful jackets brightened the otherwise dismal day.

Barbara gave us our wet suits. We took one look at ourselves and doubled over with laughter. Wet suit, life jacket, sneakers, scarf and sunglasses! What a sight! Helyn spotted a picture on the wall of a raft in the throes of the rapids and had another bout with fear, but regained her composure and decided that since so many people had been on the river before her and had not died, why should she be the lone sacrifice?

We boarded a bus for a fifteen minute ride to Rhododendron Trail, the path to the river. As we walked along the rocky, narrow path, the fragrance of fresh young leaves filled the air. The early morning mist added a dream-like quality to the scene. Through the spaces between the trees, I could see a stream keeping pace with our strides. Its rushing sound was a portent of things to come.

As we reached a fleet of rafts near the river, early arrivals were already seated four to five in a raft, waiting for instructions. Helyn breathed a sigh of relief when she learned Barbara and Bucky, another guide, would share our raft.

Ours was the Sweep—the rear guard equipped with first aid kits, ready to assist rafters in trouble. The Point led the flotilla, while the Roamers searched for fall out victims and two kayaks policed the entire operation. Topping the list of instructions was a stern warning: No drugs. No alcohol. Other instructions were rattled off. Always remain in front of the kayaks and the sweep. Never kneel in a raft—always remain in a sitting position. If you fall out of the raft, don’t try to stand up. Assume a sitting position facing upstream and let the current carry you downstream until someone pulls you in.

We were told that it was not uncommon to see a fallen rafter whizz past your raft with a wave and a smile. We were assured that if we followed these instructions and wore a life jacket, the trip would be safe. We tried to listen attentively, but our anticipation made us impatient. At the word go, we jumped up and lugged our rafts down a small hill and into the water. After a few minutes, we were wet and on our own.

It didn’t take long for our raft to hit the first rock. Helyn uttered one of her famous expletives. Following Barbara’s instructions, she shifted her ample weight to my side of the raft. That not only forced the raft off the rock, but almost forced me into the water. For a while, we kept going around in circles. Then, bam! Smack into a boulder! Bam! Another one! We continued down the river.

We had to stop several times to aid rafters in trouble — the price you pay for being in the sweep. Before long, our raft was flooded, and Helyn, fearing we would sink, threw down her paddle and began to bail furiously. We moved into a pocket of rapids. The fast current tossed us about.

As our raft floated through calmer water, we had time to appreciate the natural wonders around us—the broad sky, the Appalachian Mountains, the trees along the river bank hovering over rocks that were covered with thick green, velvety moss. The vastness of the Open spaces was awesome and made our rafts appear like toy tops floating down a stream. My imagination suddenly switched to the Lenni-Lenape Indians who inhabited the area in the 17th century and paddled their canoes down the Lehigh.

In later years, a railroad was constructed, which still runs parallel to the river. And in 1846, the Delaware canal was built. Many of the rocks in the water landed in the Lehigh when the canal was destroyed. Without these rocks there would be no whitewater.

Softly, slowly, and careful not to disturb the pervasive silence, we paddled around bends and under bridges until we came to the Sea of Rocks, a long section of whipping water. The water was a wild creature again. But by now, Helyn had gotten the hang of it and began to paddle like a pro. “We can do it!”, she shouted. We made it.

If all this has left you itching to get into a raft, there are three rafting seasons in the Poconos: March 1-June 30; July 9-August 16, September 13-October 16. The best time is April when the water is extremely high. Towards the end of June, the water can get very low.

For summer long rafting, there’s the Yougenhany River in Western Pennsylvania, and the Peaobscott and Kennebec Rivers in Maine, whose waters are controlled by dams. Then there is the most exciting of them all—the Colorado River.

Pocono Whitewater’s rates per person are $24 (weekdays), $26 (Sunday) and $28 (Saturday, the busiest day). There are special group rates and youth group discounts. Rates include the rafts, life jackets, and water-tight pails for your lunch. Wet suits rent from $5 and $10. Special rafting excursions, such as the two-day rafting trips, Superman Special and the Lehigh-Jim Thorpe Raft Race, are also available. For more information, contact the Pocono Whitewater Rafting Center, Route 903, Box 44, Jim Thorpe, Pennsylvania, 18229, or call (717) 325-4097 or (201) 774-6965.

Split Rock Lodge offers a special weekend rafting package for $39.50 per person (plus tax and service charges), which includes breakfast, dinner and a box lunch for your rafting trip. For more information, call (717) 722-9111. During the rafting seasons, Pennsylvania becomes a summer fest, featuring such events as the Wine and Cheese Festival, Bean Soup Festival, the Friendship Festival, and many others. For brochures and additional information, contact the Pocono Vacation Bureau, Box PR, 1004 Main Street, Stroudsburg, Pennsylvania 18360, or call (717) 421-5791