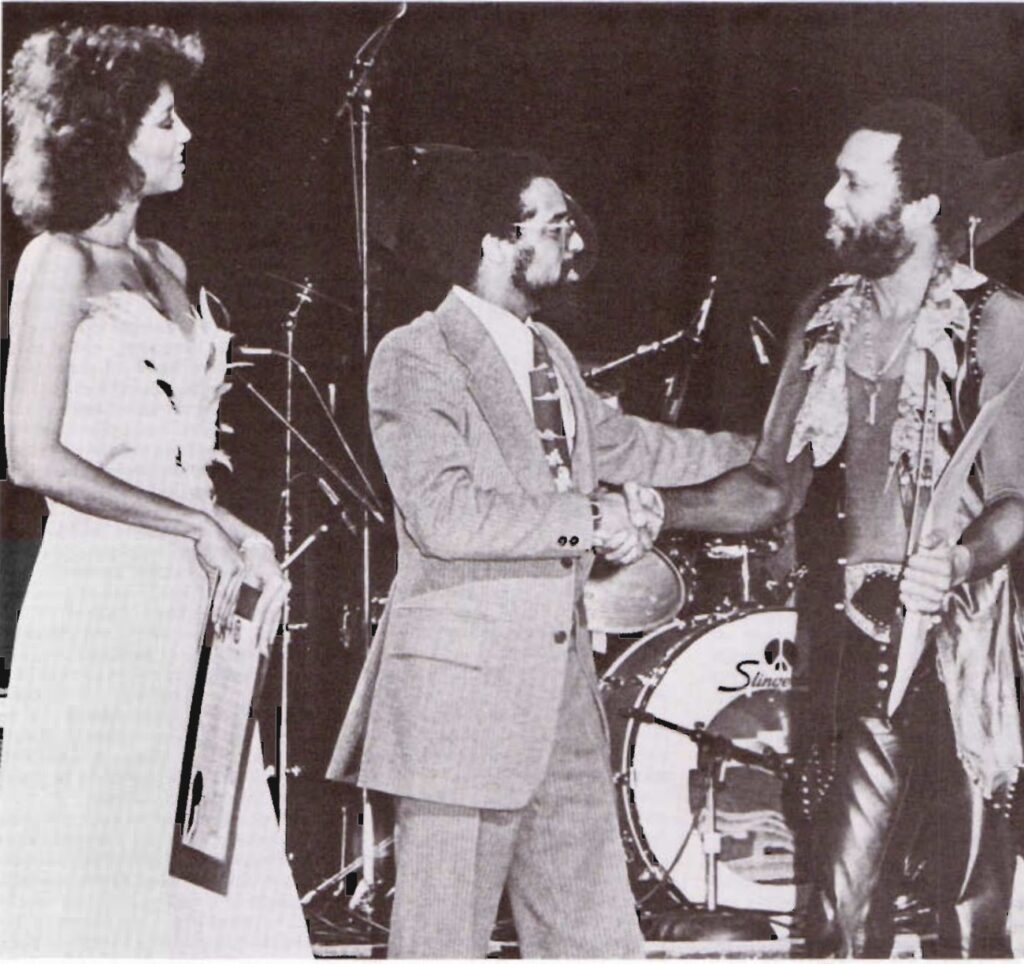 “The basic philosophy of most jazz purest is to just play and be creative. However, in the early 1960s, I looked at the profit made by the multi million-dollar corporations involved in music, RCA, CBS, etc., and then I looked at jazz musicians who were starving. It was then that I said to myself ‘there is something wrong'”.

The interview with Roy Ayers was taking place in the living room of his Riverside Drive apartment amid the flurry of people coming and going — Roy Ayres is conferring with business associates concerning the launching of his new record label Uno Melodic Records.

“I have been on some of the highest plateaus in my life with some of the greatest musicians in the world Curtis Amy, Gerald Wilson, Jack Wilson, Phineas Newborn, Teddy Edwards, Hampton and Hawes, Chico Hamilton and Herbie Mann. And my idol is the ‘granddaddy of the Vibes’ Lionel Hampton who inspired me to play the instrument after a childhood encounter. But I have come down to another musical level now which I feel is great creatively, but not on the high plateau of Jazz. I have done this because I am aware of survival.”

In 1970, Roy Ayres, Vibist, singer and pianist, left the comfort of the family of Herbie Mann, earning a salary of $20,000 a year, to go on his own. He has since recorded 23 albums encompassing several musical forms. [It is not uncommon to find selections of jazz, pop, rock, Latin, R & B or Country and Western on the same album.]

He attempts to shed light on his eclectic taste: “We are starting our own record company to provide jobs for Black people because Black people don’t have jobs.”

When the question of creative quality versus dollars came up, his answer was prompt: “Dollars!”

“Money is the vehicle I need to grow and to help others to grow.” His sharp tone and intense stare underline his concern regarding the economic condition of Black people.”I believe all black musicians should incorporate it in a message in their music. A message that will stimulate and motivate Black people to become more unified on their problems and solutions.” He points out that songs from the 1970s such as Red, Black and Green, 2000 Black, and I Am Your Mind were written and sung for that reason. But how about the nonsensical tune Freaky Deaky? He responds “Commercialism has kept me from saying more than I have said. The system pacifies you. I don’t get too revolutionary because of the possibility of alienating radio stations.”

Instead, Roy has alienated some of his jazz following and jazz critics like Leonard Feather. Roy recalls vividly the price he has paid “Leonard feather always gave me glowing reviews when he reviewed concerts that I played, however,” he continues “after my first solo album in 1963, Leonard criticized me for sacrificing my jazz integrity. But, I consistently sell around 350,000 copies of every album I make.”

Despite the criticisms, Roy is constantly on the move. The first release on Uno Melodic Records is due to debut within weeks. The label will introduce “Eighties” ladies, a disco group. Roy however, still plans to record on the Polydor label. He says, “My upcoming albums will reflect a new black consciousness which has been inspired by my recent trip to Nigeria.”

Roy and Nigerian musician Fila Anikulapo-Kuti toured together for two months. “I became very enlightened about my blackness during the tour. I realize that it is time for me to promote black international exchange through Music. Now I am really going to be black. Sounding like a crusader, he continues: “Some of those la-dee-dah songs I do, f …’em. I’m going to do black songs. They will contain serious political messages.

“I’m a musical revolutionary who believes that music is the strongest vehicle to communicate with people to make a change.” In stressing his point, Roy quotes the last three lines of a poem written by Lynn Joy Rogers. “We [Black people] must learn to say [to each other], I love you without hesitation, limitation or exploitation.

“During a time when Black people are searching for solutions to mounting problems, the answer begins simply with love and unity, pride and knowledge,” he stresses.

Roy recently celebrated a mile stone at the Village Gate” his 10th anniversary with Polydor records. He delighted the audience with a rousing set, featuring flutist Bobbi Humphrey. As he ended set with his recent hit single Don’t Stop the Feeling. “Nearly a dozen of his musical colleagues joined him on stage for the fun-filled finale. Flutist Herbie Mann [producer of three previous albums], singer/songwriter Edwin Birdsong, Wayne Garfield, Bobbi Humphrey, vocalist Mark Sadane, Ethel Beatty, Sylvia Striplin and others crowded onto the small Village Gate stage to play and sing. Later Norman Connors, Jean Carne, Robert “Kool” Bell of Kool and the Gang, LaToya Jackson of the talented Jackson family and others attended the party in his honor.

Not want to harp on the more serious subjects, I asked Roy if he could remember some lighter moments of his career. On the day following Richard Pryor’s release from the California hospital after near fatal burns, he recalled an incident with Pryor:

“One night when we were performing on the same bill at the Kennedy Center in Washington, I walked unannounced into his dressing room. I knew him and I thought he recognize me. He was on the telephone, so I just waved to him and sat down to play piano in the corner. Soon after, he hung up and eased around me slowly, giving me the OK sign with his hand, as if to say, ‘Everything is all right‚’ and exited while I was playin, he didn’t return.

“The next day, my agent told me that Pryor had called his manager and wanted to know who ‘was that nut’ in Roy Ayers’ band who came into my room and started playing the piano?’ I told my agent, well you can tell him that Nut was Roy Ayers.”