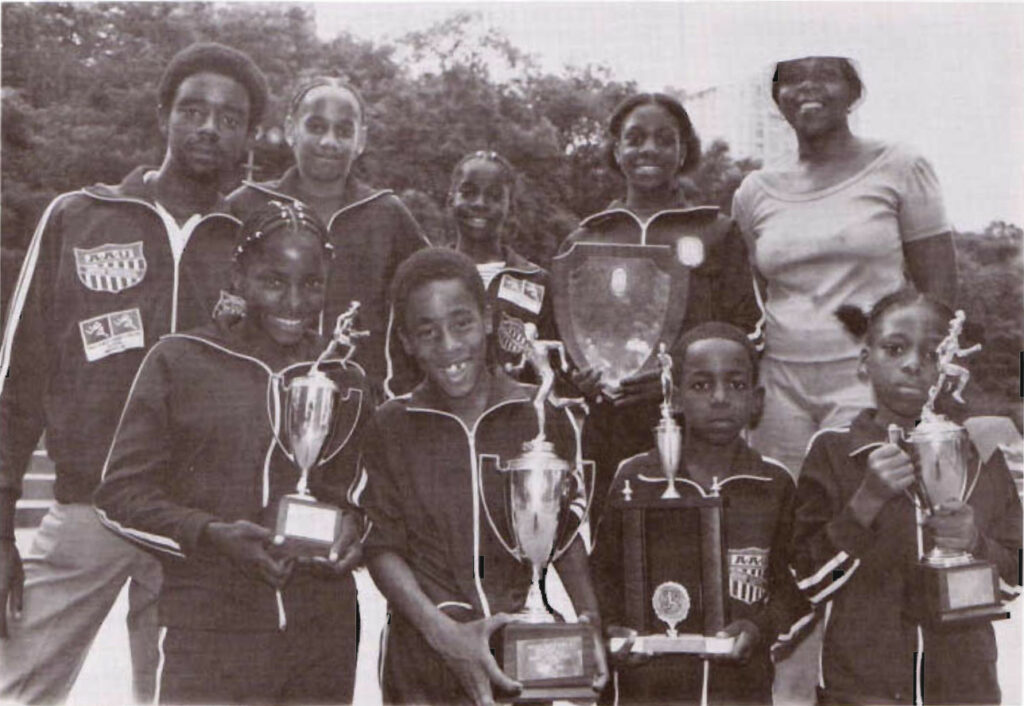 This year’s crop of US track and field athletes strove to make an Olympic team destined for international anonymity. The boycott of the Moscow Olympic games has wasted countless hours of training and goodwill for many an Olympian from coast to coast. In Harlem, where deferred dreams are part of every day life, a new one is beginning, nonetheless.

Through the combined efforts of a hard-working coach, some very talented athletes, and if you were concerned parents, a track and field reverie is becoming a reality. The Flyers Track Club, is the only age group track team in Harlem, in a relatively short period of time, has made its impact felt on the city’s track circuit and national meets as well.

The moving force behind the Flyers is 17-year-old coach Kevin Moore. He is known to be the youngest coach in the amateur athletic union. The idea for The Track Club dates back to the days when Kevin ran track events for the kids from Harlem’s Polo Ground’s Projects. “The club is something I started to show young children that they have a number of abilities in different areas,” he said in a recent interview with ROUTES. “In order for them to excel in one particular area, they have to put excessive time in that area,” he contended.

The Flyers have taken that philosophy to heart. In the 1 1/2 years that the club has been in existence, the Flyers have received over 700 medals and 60 trophies. The 25 member club, whose members are between seven and 13 years old, has shown promise and potential for producing excellent runners.

One of those runners, Machelle Sweeting, at the tender age of nine, has emerged as one of the shining stars of the club. She is a member of the number-one-relay-team in the country for her age group and also owns the national record for the 440 yard dash in her age classification. Machelle was praised in the press for her running exploits at last springs Colgate Women’s Games VI at Madison Square Garden. She won the 800m competition with what appeared to be an effortless stride. Machelle, whose bright eyes dull the gleam of her trophies, has been running competitively for 18 months. The start of her training was kept a secret from her mother, Mary Sweeting, who was concerned over her daughters health since Machelle was born with a dislocated hip and had to wear a corrected brace for more than a year. “I didn’t want her to run,” she confided. “I was always afraid she would do something harmful to her leg.” It was Machelle’s sister, Elizabeth, who was already a member of the team, and Coach Moore, who encouraged Machelle to keep running.

The secret, couldn’t be kept any longer when Machelle came home one day with her first trophy — third place in the mile run event at a local track meet. That award and one other award are the only trophies, out of the 18 she has won that aren’t first place winners.

Other outstanding individual runners with the Flyers are Laverne Ebron, Liz Sweeting, and Yvette Davis. But with the Flyers, team concept comes first. Moore shows no favoritism among the boys and girls in the club. As a team, they have several national titles, along with individual and meet records established by team members. They are much in demand to take part in team track meets around the country, but they are too financially strapped to make most of them.

“Some meets are just out of our reach,” said Mrs. Sweeting, who is also the clubs business manager. Last year, four girls had been invited to one of the top meets in California, but the $3,000 to get them there just wasn’t to be had. The same problem arose again this year, when 14 members of the team qualified for a top meet in Tempe, Arizona. The team still has to struggle with fundraising discos and bake sales, which don’t produce the kind of money needed to send a whole team across the country. But the ambitious runners are not bitter, not even at the fact that many of the community businesses have turned a deaf ear to the pleas of support. Aside from fundraising activities, parents are required to pay monthly fees, which helped to defray the costs of travel and meet team or individual entry fees. Some of the money also goes for equipment and uniforms.

One immediate problem facing the team is finding good competition for runners like Machelle. Age group track teams are given much higher status in states like Ohio, Maryland, and North Carolina, thean in New York. “The competition is out of state,” Kevin revealed.

These obstacles notwithstanding, the Flyers continue to soar on the track and off. The team practices at least four times a week. Coach Moore urges the team members to reach inside themselves for that extra effort that can make the difference between winning or losing. His influence has gone beyond track — his team members are all excellent students and well-rounded and individuals. Kevin and the parent emphasize passing grades as well as passing-the- baton. “Kevin does a lot for the team,” Mrs. Sweeting noted. “He takes them to the movies, out for pizza, and last year he gave them an awards dinner.”

Kevin himself maintains an A average in high school, and has his mindset on becoming a lawyer as well as a good track coach.

Everyone associated with the Flyers is optimistic about the future. Are these the track stars and Olympians of the future? Could well be. Perhaps the deciding factor will be the efforts put forth by a young man with a dream, and those who share that dream.