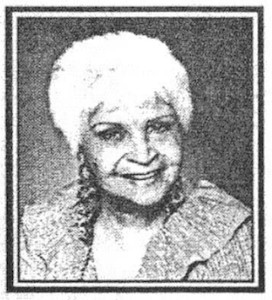 Miss Jean Taylor, veteran actress, has embarked on a new career as a Cabaret singer. A big step for a woman of “70ish” years. But she takes it in stride with an entertaining revue, Remembering The Great Ladies of Cabaret, at Don’t Tell Mama, 343 West 46 Street.

This spunky lady, sporting a fuchsia silk pants suit and a cropped platinum coiffure, steps into the spotlight, puts her hand on her hip and states categorically “I’ve always had great love and respect for great ladies of cabaret. Alberta Hunter, Mabel Mercer and Mae Barnes. I don’t want their images to die. So I’m going to try to keep the memory of them alive, and, maybe 20 years from now young people will remember that Jean Taylor also used to sing Cabaret.”

Then, she moves confidently into a repertoire of tunes that not only evokes memories of her idols but also reflects her view of life — I’ve Got A Lot of Living To Do, and This Is All I Ask, which contains the appropriate line “As I approach the prime of my life I have the time of my life.” The selections include upbeat tunes such as That’s How The Ball Bounces, Baby, written by her music consultant Dawn Hampton, which she sings with jazz and sass. And pianist Ian Herman and bassist Lyn Christie provide solid support.

Miss Taylor, the actress, employs her acting skills in doing asides, skills that truly shine when she tells a joke. “You remember how comedians would lean back and look left, then right before telling a joke,” she asks, adding “I always wanted to do that”. So, she does, and proceeds to tell a bawdy joke. An older woman finds a handsome young man at her front door one rainy night looking for a place to stay. His car had broken down. She invites him to share her bed. Miss Taylor then uses gestures, facial expressions and vocalizations to describe what happens next—the house explodes with laughter.

The audience is entertained with some fancy footwork as well—a mean soft shoe. Without skipping a beat, Miss Taylor slips back into singing like a foot slides into an old slipper.

This versatile Washingtonian has had many years in show business. She made her debut in the late 1930s, as a member of an all-girl touring band called Sweethearts of Rhythm. Then went on to appear in several stages, screen and television productions, including Great White Hope, Cotton Comes To Harlem and the former NBC sitcom Sanford and Son. Today, she is at ease with the audience, and they with her.

She chats with them and gets them to join her in song. “You know, sometimes when I’m on stage I get to a point when I don’t remember what I am supposed to do next,” she says holding her hands to her temples and shaking her head. “But I’ve got a piece of paper over there (nodding towards the piano) that I go to and peep on. So right now it’s “peep time.”

“Peep time” is followed by a call for the audience to “get down, get funky and sing Frim Fram Sauce with me”. Snapping her fingers to the slow, groovy tempo, she begins to sing this Nat King Cole standard. At the refrain she opens her arms with a come-hither motion, coaxing the audience to sing I want some frim fram sauce with the awesome fay and shafafa on the side.

Before closing the show on Aug 4, Miss Taylor gave a touching tribute to Mae Barnes (now residing in a nursing home), sitting in the audience, along with other well-known performers, jazz pianist Don Shirley, hoofer Honi Coles and the Copesetics. They were all there to share in the tribute. Proudly, she asked them to stand. After presenting a plaque to Miss Barnes, she broke into a snappy number that served as a rousing end to a wonderful show, one so inspiring you’ll want to tell everyone about it — even Mama.

See this August 1991 issue of ROUTES as pdf.