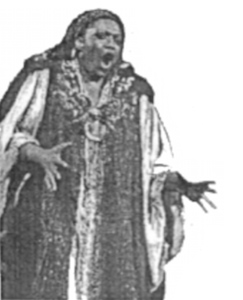 In Germany, every summer a wonderful exchange of spirits takes place between people of different cultures and countries. In the spirit of youth, young talents receive the opportunity to make music together with world famous artists, singers, orchestra and conductors at Schleswig-Holstein Festival.

Since 1985, in the spirit of peace they recreate music and revive understanding — quite differently than in the established world of sound and entertainment — during an, indeed, unconventional festival.

On July 26, 1991, Jessye Norman performed at the castle of Kiel, a city in North Germany, ashore the Baltic Sea. Of her performance Die Welt writes: “Forget everything which has been written about her — about the cult-figure, the black Callas, the exuberant beauty, about weight and rumor, honoraria and prices, about allergies and piques about delicacy and perception, about the ecstasy of  her appearances — but forget also this: perfection is indescribable.”

Like an African queen she entered that Friday evening the castle of Kiel. Focus, center, drain, all the second you saw her in her fantastically colorful robe, full of African flare. An appearance: flashing eyes, sparkling teeth and over and again this entranced smile, in the phase of concentration. This is more than the necessary chiming in: total sinking, alighting from reality, silent dialogue with her God and triumphant return, as soon as the first tone resounds.

Far into these distant angles follows her audience, without, however, really being able to follow her. This is not a contradiction— rather the blissfully experienced removal of differences between her, the assoluta, and one’s own narrowness of daily occurrences. Long already plasticine in the hands of the Norman, the public is happy and thankful, moved and stirred whenever she is stirred and moved, thankful and happy — only it is she, and she remains, who leads.

As Leonard Bernstein in former times, this African-American has the magical capacities and the talent to become one with her audience — one, without the tinge of a delay between. The lightning of her genius is our flash of lightening which strikes and lightens at the same time. Perfect equality of emotions. That means redemption, creates, however, at the same time a kind of defenselessness, even. the hardest rock succumbs to. The suppleness of her voice engenders laughter and crying, takes the audience away, to all highs and lows, chases them from ‘pianissimo’ to ‘forte’ through the roller coaster of passion, until it bursts out of the partaking people, hardly that the last note died away and once again — she has set to the adorable, black statue.

Once, during the third encore, a gospel, she entices the audience with a single ‘jazzy’ tone to a collective groan which at the same time discharges the tenseness; then, another time, it pleases her to let fall her fascinated congregation, at least allusively. With a minute smile of anticipated joy she extends her hand, like a Balinese temple dancer, while protracting the corresponding note by a nuance, and immediately the dismayed audience is done for, it drops, no doubt hoping, but anxiously into the hole, until finally it is relieved, caught by this single tone which matters as nothing else in the world.

Friday evening. Kiel experiences a stellar hour. The city is at her feet. Men and women. Without jealousy nor envy. Only frantic applause, clapping and roaring. Only jubilation and joy and happiness and thankfulness — gratefulness and exuberance and reciprocity. Complete strangers embracing each other, accidental seat neighbors. Kiel in intoxication. And Jessye Norman, this prototype of a woman? She stands and absorbs it and smiles and seems not to quite seize all this. And then she gives back, sings, begins this jazzy gospel—out of the lost abyss of her voice.”

See the complete issue of Routes, A Guide to Black Entertainment August 25, 1991 as PDF.