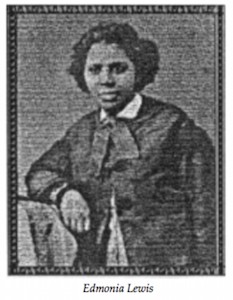 Black Africans who emigrated to these shores before, on and after the landing of the Mayflower were designated Free Men. During the early Nineteenth century, the vast majority of these Free Men were settled in the more liberal northern colonies where they lived close to and in harmony with indigenous Americans.

Edmonia Lewis was born in 1845, in Albany, New York, the child of a free African man and a Chippewa Indian woman. After the death of her parents, Edmonia was reared for a while by her mother’s tribe then later placed in an orphanage. She was subsequently adopted by an abolitionist family.

In 1859, Edmonia entered Oberlin College where she became involved in the abolitionist movement, which brought her to the attention of William Lloyd Garrison, a dominant figure in the movement and publisher of the abolitionist newspaper. The liberator Garrison, who knew of Edmonia’s ambition to study art and her talent at modeling, arranged her introduction to Edmund Brackett, the prominent Boston sculptor. Under Brackett’s careful tutelage, Edmonia launched a career that earned her the dual distinction of being the first African-American woman artist and the first of her race and sex to be recognized as a sculptor.

The first exhibition of her work was held in Boston in 1864. Her bust of Robert Gould Shaw, the martyred leader of an all-black Civil War regiment, evoked the kind of response in the art community that resulted in the wide sale of her work; the proceeds from which were used to finance her trip to Rome in 1865.

In Rome, Edmonia mastered the exacting techniques of sculpture; moving directly from the image she held in mind to the difficult medium of marble. Her creative gifts quickly brought her to prominence.

Edmonia spent most of her adult career in Italy riding the crest of the neoclassical revival of the late 1870s. She captivated Rome and attracted worldwide notice in artistic circles with her exotic look, mannish garb, intense personality and forthright manner; characteristic of the later Josephine Baker.

As her fame grew, Edmonia was invited to America to exhibit her work in Chicago in 1870, and again in 1876 at the Centennial Celebration in Philadelphia. Her best works, portrait busts done in the classical style of the Romans, include those of Abraham Lincoln, Wendell Phillips, Charles Summer, John Brown and Henry Wadsworth Longfellow. Among her better known completed figures and groups are: Hagar, depicting a biblical theme; Hiawatha, The Marriage of Hiawatha, and The Departure of Hiawatha.

Her figure group, Forever Free, aroused the greatest general interest. It portrays a black couple, just out of slavery, becoming aware of the fact that they are no longer in bondage. The man has his left arm raised and his fist clenched in a symbol of black power and freedom that would appear to be timeless and universal among Africans throughout the diaspora.

Other of Edmonia’s noted works are the Death of Cleopatra, The Madonna with The Infant and An Old Indian Arrow Maker and His Daughter, perhaps reminiscent of her early life among her mother’s people.

During her later years, Edmonia returned to the United States. However, the vogue of neoclassicism was becoming less fashionable and Edmonia Lewis gradually passed from public notice into obscurity. Historians are at variance as to the place and year of her death. It is believed that she eventually returned to Rome, the home of her heart, where she died around 1890 [Editor’s notice: Since the publication of this article, recent documents indicate that Edmonia died in 1907 in London, England.].

Several of Edmonia Lewis’ works are on exhibit at the Oberlin College Archives, part of the permanent collections of the Howard University Gallery and at the National Museum of American Art at the Smithsonian.

There is also a pdf available with the original layout of this Routes issue.