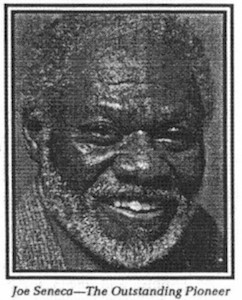 Once again AUDELCO recognized excellence and ingenuity in African-American theater at its 19th Anniversary celebration, held on November 18, 1991, in the Langston Hughes Auditorium at the Schomburg Center for Research in Black Culture. Awards were made in a number of categories including, Best Dramatic Production, Best Musical, Best Lighting, Best Sound Production, and Special Honorable Mention. Tributes were paid to Off Broadway, Off-Off Broadway and Way-Off Broadway productions.

Homage was also paid to — Joe Seneca — The Outstanding Pioneer our ancestor: and living elders of whom, Elmo Terry-Morgan AUDELCO, writer and director, poetically wrote,…By their life examples have shown us that a dream can be woven into a vision and a vision into action.

Mr. Joe Seneca, actor and writer exemplifies this statement and for this reason was chosen to be this year’s recipient of the Outstanding Pioneer Award. The purpose of the award, says Vivian Robinson, founder and producer of the AUDELCO Awards is to honor and thank those who have made a major contribution to the rich heritage of African-American art and culture. A consummate actor, Mr. Seneca is known for his convincing portrayal of a number of characters, most notably Cutler, the saxophonist, in August Wilson’s Pulitzer Prize winning play Ma Rainey’s Black Bottom, Willie Brown, the feisty Delta bluesman in the movie Crossroads, and the retiring Hillmen College president on the Bill Cosby Show. As a writer, he has penned the legendary songs Talk to Me and Break It To Me Gently. Perhaps he is best noted for his insistence on positive presentations of African-Americans on television and in the theater. In this regard, he shares the ideas of Dr. Francis Cress-Welsing, renown African-American psychiatrist, who believes There has got to be a limit, some things can’t be sold. We must refuse to compromise our values, our stories and our images for money. Even if they offer a hundred billion dollars a minute, we must say No! Mr. Seneca has always said No! Loud and clear.

Black Nativity, written by Langston Hughes, garnered several awards, including Musical of the Year. The Outstanding Performance Award in a Musical went to Ebony Jo Ann, for directing, to Hattie Winston and James Stovall, and for choreography to Shirley Black-Brown.

There is also a PDF with the original layout and listings of  Routes, A Guide to Black Entertainment December 9 1991