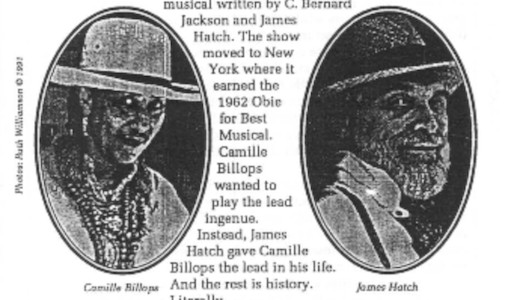 They met in the city of Angels at the start of the 1960s when the decade was just beginning to whirl and roar, taking this country to an emotional peak, leaving little the same as before. Camille Billops was singing in the chorus of Fly Blackbird, a Civil Rights musical written by C. Bernard Jackson and James Hatch. The show moved to New York where it 1962 Obie for Best Musical. Camille Billops wanted to play the lead ingenue. Instead, James Hatch gave Camille Billops the lead in his life. And the rest is history. Literally.

Playwright, poet, editor, biographer, and professor, James Hatch and Camille Billops, artist, potter, singer, painter, graphic designer, sculptor, filmmaker, are history’s stewards. They found a niche and filled it with their commitment, talent, and energy. They created the Hatch-Billops Archives, a private library housed in the SOHO loft where they live and hold periodic Sunday salons. In addition to an extensive library, they have a collection of slides and rare magazines, over a thousand oral history tapes, and an impressive art collection.

History took hold of them In the mid-sixties at City College where they both taught when they returned from a three-year stay in Egypt, benefit of a Fulbright scholarship. I was right where I wanted to be with all those bright, ambitious minds, remembers Jim Hatch who is still teaching at City and also at CUNY’s Graduate Center. He sits facing me in the Cupping Room, a lovely SOHO restaurant with rich, dark wood everywhere and an upright black iron stove blazing warmth at my back. Those were the days of black is beautiful. No one in the department knew anything about black theatre. I was drafted to teach black theatre in the evenings. That was when the first anthologies were being published. There wasn’t much information available, so I decided to put the information together myself.

Camille was teaching ceramics in City’s Art department and collecting black art slides. People started asking us for material. So, we decided to form our own organization. We got funding in 1968 from the National Endowment for the Arts, and we were chartered by the State Board of Regents as an educational research library in 1875. Camille did all that legal work. She wrote the proposals. Camille’s the president and fund raiser. The Hatch-Billops Archives publishes a yearly journal of the interviews that are conducted several Sundays a month in front of an invited audience. Hatch is the journal’s editor and publisher and conducts most of the interviews with people distinguished in the arts, music, dance, cinema, architecture.

We concentrate on older people because they have more to tell. We want to get their stories before they take them with them.

We do people with big, little and medium-sized reputations. We focus on finding information that hasn’t been discovered before, and making it available. It’s all about dissemination. It’s no good to have all this information, all these resources sitting around being neglected. That’s what it’s all about, getting the information out into the world.

Jim Hatch and Camille Billops also make films together. They’re making one this summer. Tell me about your films, I say as I sip my coffee, whitened with cream. “It’s our fourth film,” he answers, a docudrama. “It’s called KKK Boutique, Inc. Ain’t Just Rednecks. It’s a 90-minute film which starts with a recognition of racism inside ourselves. We all get attacks.”

“Our first film was called Suzanne, Suzanne. It was about Camille’s niece who suffered through child abuse, heroin and crime. Camille was proud that she survived. Camille started making films when she left the Art Department at Rutgers where she was teaching part-time for very little money. I encouraged her to go out on her own. That was the late 70s. The film was successful. It was shown at the Museum of Modern Art, New Directors Series and on Channel 13 in 1983.”

“The second film was a talking heads film about older women and younger men. It looked beneath the stereotype and discussed the discrimination as well as the joys that both men and women in that kind of situation feel. Women liked it. Men didn’t.”

“I’m going to Sundance with our third film the end of January. It’s culled Finding Christa and it’s about Camille’s search and discovery of the daughter she gave up years ago. It’s a docudrama too. We’ve inserted fantasy sequences as a metaphor for what’s going on in people’s minds, heads, and hearts.”

“We make our films in a mom and pop style which translates into low finances. We have to raise tho money ourselves. The film is of the talking heads variety and it’s conscious of being a film. It’s cinema verite which means unscripted. Instead of actors, we use real people dealing with contemporary problems. We add fantasy to give the audience an insight, metaphorically, Into feelings. This is their merit. They’re simple and cheap and honest. Honesty makes them good. People can be themselves, This Is the age of confession. It’s amazing what people will reveal on camera.”

When cutbacks threatened to slice bone, Hatch-Billops had to think of alternatives. “Camille’s resourceful,” Jim says. “She held an art auction in October which made up the difference in the money we’d lost. I’m not salaried. Camille wrote a grant two years ago to raise the money for her salary. We still have a big hurdle to face. What to do with the collection as a whole? We don’t want the collection split up. The Library of Congress will take everything except the art collection. The National Gallery will take the art, but we want to keep everything intact.”

Hatch-Billops, 491 Broome Street, is open to the public, students and scholars. There is one simple provision. You must call first. ‘ho telephone number is 966-3231.

[Editor’s Note: At the Sundance Film Festival Camille and Jim’s Finding Christa shared the Grand jury Prize in Documentary with the British film A Brief History of Time.]

See the complete issue of Routes, A Guide to Black Entertainment February 10, 1992 as PDF.